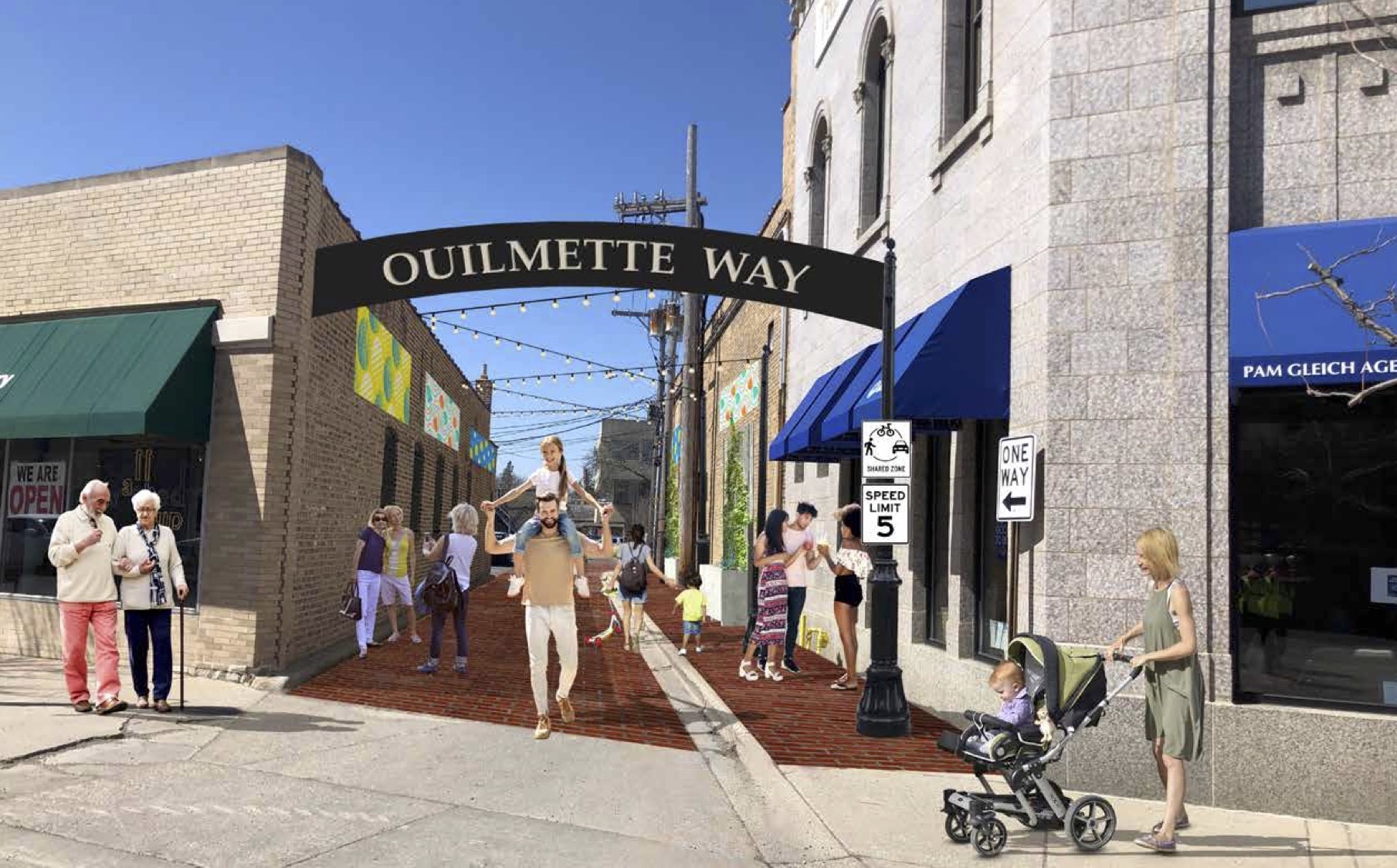 One of the options for the pathway, which includes an expanded raised sidewalk and gateway sign and lights affixed to neighboring buildings. | Images By Teska Associates

A proposal to reimagine an alleyway in downtown Wilmette as a pedestrian pathway is still at least several months from a vote.

But the Wilmette Village Board did green light village staff to open a bidding process for the project, known as Ouilmette Way, at its regular board meeting on Tuesday, Dec. 14.

Ouilmette Way was introduced to trustees at the Nov. 23 Village Board meeting. The concept calls for linking three segments of an alley that runs east to west, from Wilmette Avenue to 12th Street just north of Central Avenue.

Village Manager Mike Braiman said that since the November meeting a few changes were made to the proposed design of the project based on cost and safety concerns from trustees.

According to the amended designs, in the west alley segment, the lighting now consists of decorative light poles, as otherwise seen in downtown Wilmette, which have replaced the overhead festoon lighting. Also,the dedicated pedestrian walkway is now more clearly marked as an added safety measure for the path that will still be accessible to cars.

Additional speed limit signage and a relocation of the Ouilmette Way gateway sign are among other edits.

“If we’re going to make this a walkway for pedestrians, these types of gateway entrances are important to signify to drivers that this is different than your typical alley or road,” Braiman said. “It’s intended as a shared-use space.”

For the east side of the alley, Braiman explained that darker brick would be used to designate the pedestrian walking area. He added that staff is proposing festoon lighting on this portion of the alley be affixed to the buildings, which would reduce costs and allow for the expansion of an existing raised sidewalk.

The village plans to use some of the streetscape funds contributed by Optima in accordance with development negotiations.

Additionally, Braiman said officials from North Shore Community Bank, located on Wilmette Avenue near the project, may contribute funds to the project.

In supporting the move to a bid process, Trustee Justin Shepard lauded the money-saving efforts thus far and said staff should continue to look for ways to relieve the financial burden.

Trustee Peter Barrow echoed those thoughts and wants a clear pricetag before a final decision.

“Let’s get a better idea of really what that number is before we charge out,” he said. “Let’s get real numbers for the construction. Let’s find out what the bank contribution really will be. How the lights may be affixed or not so we can really understand what this really will cost and I think we then can assess it.”

Former Village President John Jacoby, who is the co-chairperson of the village’s sesquicentennial celebration committee, told the Village Board the committee both endorses the project and would like to see it happen all at once.

Part of the committee’s fundraising efforts for the celebration will be offering donations for engraved bricks to be placed along the pedestrian portion of the alley.

Village President Senta Plunkett said Ouilmette Way will improve the downtown area and said local businesses have reached out to indicate their support.

Currently, the alley in part is used as a through road for vehicles and as the refuse area for many abutting businesses. While in support of the project, Trustee Gina Kennedy hopes the board makes sure businesses are on board in regular upkeep and maintenance of the space.

Plunkett said that bid results are expected in April. Trustees are then expected to consider the scope of the project and if approved, how to proceed with the renovations.

Trustee Dan Sullivan, the chairman of the board’s Municipal Services Committee, called the plans for Ouilmette Way “one of the more exciting things I think we’ve done.”

“I would fully support it,” he said. “I totally agree we should do the whole thing.”