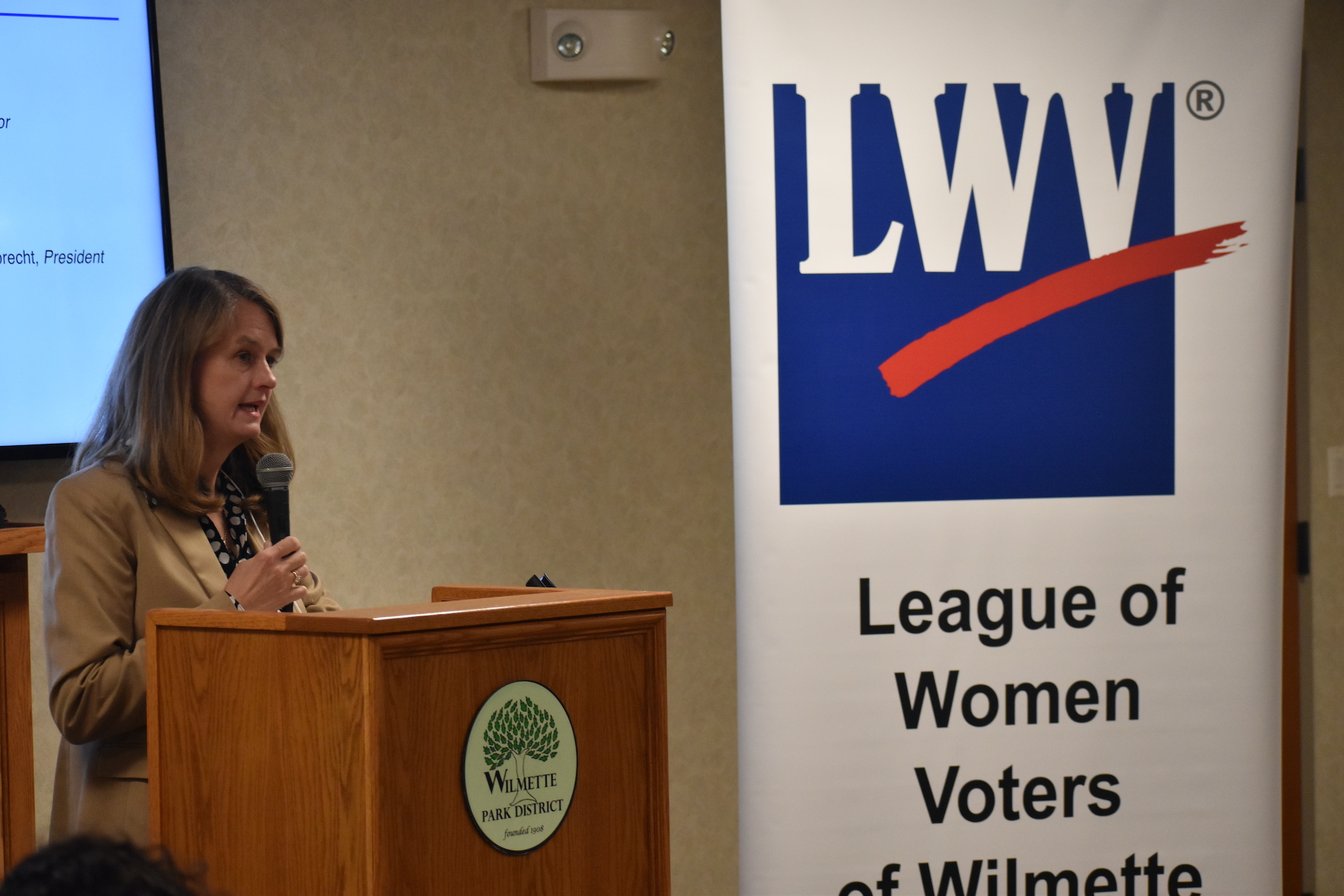 Wilmette Village President Senta Plunkett speaks to residents and her peers at the State of the Village Wednesday, Nov. 10, in Wilmette. | Photos by Joe Coughlin/The Record North Shore

Local leaders were on the hot seat Wednesday night, Nov. 10, at Mallinckrodt Center in Wilmette.

Representatives from Wilmette’s main taxing bodies offered updates and answered resident questions during the biennial State of the Village organized by the League of Women Voters-Wilmette.

During the event, public officials took turns at the lectern giving speeches that focused on ongoing and upcoming projects, as well as current issues facing their respective organizations.

The evening finished with questions from residents, who pushed their leaders to identify action items on goals related to diversity, civility, sustainability and more.

“This is the only opportunity to hear from all seven (government bodies),” Zun said to start the evening. “This is a unique opportunity to engage in a conversation with and about the community. … We can hope to learn from local leaders and each other in an atmosphere of community and civility.”

Many government officials were in the crowd, joining about 20 members of the general public.

After short speeches from the seven board presidents, Zun began to read questions submitted by residents.

As far as affordable housing, Plunkett said efforts are underway to develop 14 affordable-housing units from the funding provided by the Optima development.

Village administrators also recently gave the green light for staff to research how to incentivize minority-owned businesses to set up shop in Wilmette.

“We’re deciding how that would work, what kind of funds we are willing to do,” Plunkett said. “… We have retail spaces we know that need to be revitalized.”

New Trier Superintendent Dr. Paul Sally was asked to step up to identify how the school is responding to students’ pleas for more sexual-assault action and resources, as reported by The Record this week.

Sally reiterated that there have been no allegations of on-campus assaults, but recognized that students are organizing around alleged crimes outside of school.

“These are not on-campus issues; it’s about students involved going to New Trier — a situation many schools find themselves in,” he said. “We’ve worked with a number of students for well over a year … to develop new policies, procedures and education (related to sexual violence).”

One of those steps, he said, is to make sure New Trier staff can properly handle and speak with students on the topic of sexual violence.

Dr. Kari Cremascoli, superintendent of D39, said the approach is nuanced, as testing has shown that students excelled in certain spaces, while other students need help elsewhere.

“We didn’t see the kind of academic loss that has been seen across the state and the nation,” she said. “There are some areas, though, and one key area is written expression.

“ … It’s taking each student where they are.”

Officials also spoke about the national issue of civil discourse and how they manage public discussions if and when they become unruly.

Park Board President Mike Murdock stepped up, acknowledging that some recent issues facing the Wilmette Park District, such as renovation plans within Gillson Park, have garnered emotional responses from residents.

“First you have to understand, why are people concerned?” he said. “We are working harder to do a ton more community engagement.

He added, “You got to run a good meeting. If people take it too far, you have to find a way to shut it down.”

As the event wound down, local leaders said their goodbyes — but not for long.

On Thursday, Nov. 11, they were again gathering for an informal working session to enable intergovernmental cooperation.