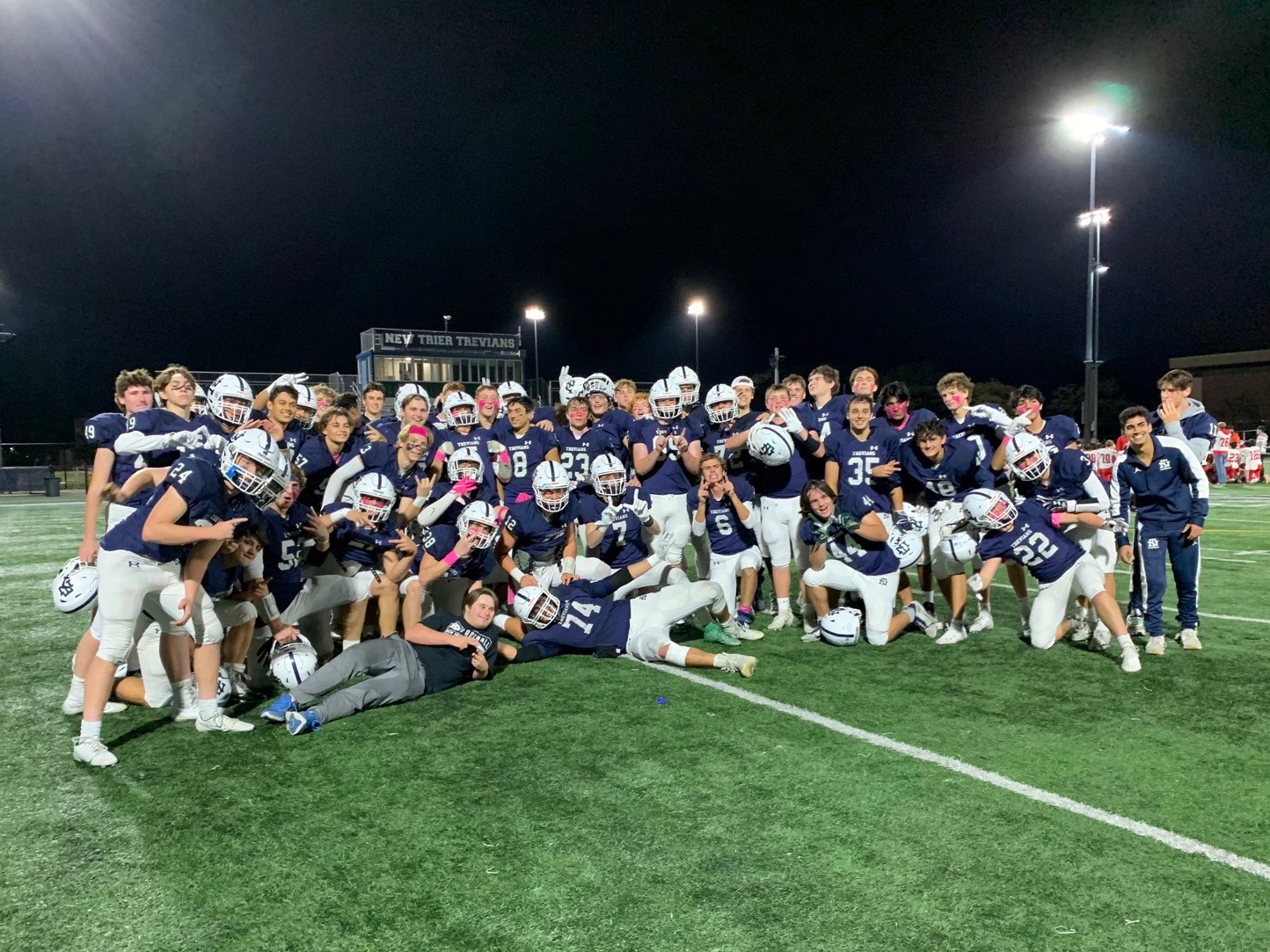 A victory is always grounds for celebration, but New Trier’s Week 8 win over Niles West provided more joy than normal.

The Trevians’ 42-14 rout of the Wolves on Friday, Oct. 15, was the team’s fifth win the season, officially making the Trevs eligible for the state playoffs. Although the Trevians have yet to reach the automatic-qualifying mark of six wins, New Trier is all but guaranteed a spot in the playoffs because of its strong resume.

New Trier missed the playoffs in 2019, the last full season of high school football in Illinois, for the first time in 16 seasons. With a return to postseason play imminent, excitement, and speculation, abound.

“I think it’ll be great (to return to the playoffs)” New Trier head coach Brian Doll said. “It will be interesting to see who we’re going to play. We’re all starting to look at it because now you can start to see where people are going to fall and anticipate what is going to happen in Week 9. But it will be a great feeling.

“Just the opportunity to play in the playoffs, it’s special.”

The Trevians also had another reason for exuberance as the resounding victory ended the program’s senior night on a high note.

“I think for us, this whole week was all about our seniors, just making sure we had a moment for them to come out here and play in this game,” Doll said. “We know next week and after that we’re going to be in tough battles every week. We just wanted to make sure everybody had a fun week at practice, and then get them all in tonight.”

On the special evening, New Trier’s upperclassmen led the way for the team.

Running back Jack Cummings eclipsed 100 yards of total offense again for the Trevians as the senior racked up 77 rushing yards on just eight attempts while catching three passes for 45 yards.

New Trier washed away a heartbreaking Week 7 road loss against Glenbrook South with a dominant performance on both sides of the ball against Niles West.

After failing to put points on the board during their opening drive, New Trier scored on six consecutive possessions.

Cremascoli opened the scoring late in the first quarter with a 56-yard touchdown run. On New Trier’s next drive, he fired a 44-yard touchdown pass to senior Everett Cook. The Trevs added another score right before the half when Cremascoli connected with Cohan on a 6-yard touchdown to give New Trier a 21-0 lead.

Niles West started the second half with an impressive 70-yard scoring drive that was capped by a 25-yard touchdown pass. New Trier answered with a 66-yard drive that resulted in an 11-yard touchdown run by Cummings.

The Trevs scored two more touchdowns: a 35-yard reception by Cohan and a 1-yard run by Kenan Mahmudli.

“We’ve worked so hard and it’s good for our momentum coming off a tough loss and going into next week, especially with a matchup against a good opponent,” Cohan said of New Trier’s senior-night victory. “I think this win was big for us.”

In addition to the on-field contributions of this year’s senior class, Doll will also remember an off-the-field characteristic of the group.

“I think one word that I would use to describe them is that they’re really kind people; and that’s great,” he said. “We want to make sure that we have good, young, true gentlemen that are growing up in our program and teaching our younger kids to be better.”

The Trevians will now shift their focus to a Week 9 showdown with longtime nemesis Maine South next Friday night, Oct. 22, in Northfield. The Hawks enter the game with just one loss (Palatine) on the season, and the Trevians know it will take an outstanding performance to best the defending conference champions in the regular season’s final week.

“I think our offense has to be gelling,” Doll said. “They’ve been great all year. We have to score points. We know that we’ve struggled defensively against some of the better teams with the high-powered offenses. So we have to put up points, I think that’s important. I think we also have to win the special teams battle between the two teams.

New Trier’s senior leaders are planning to lead a motivated team into battle.