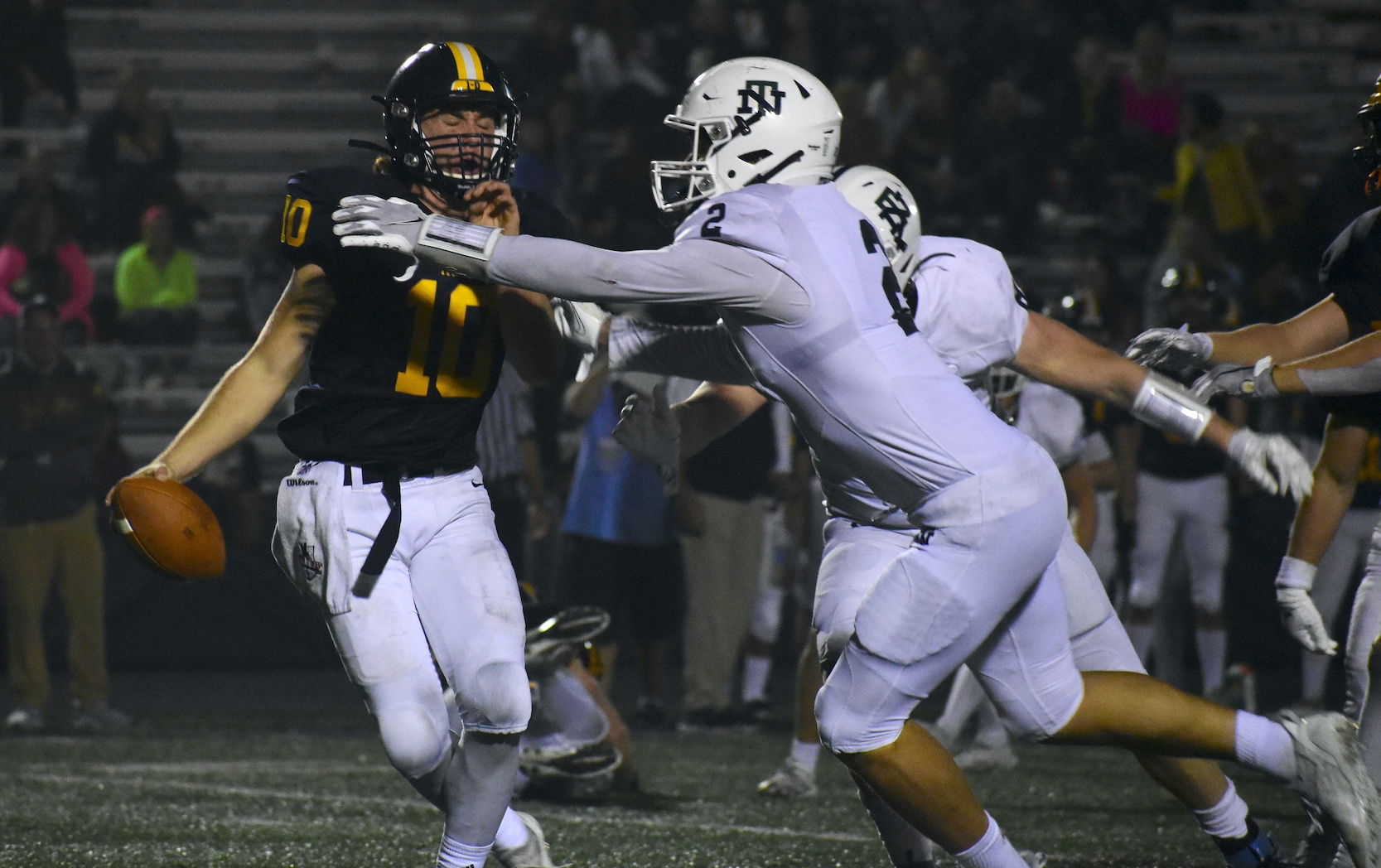 Dugandzic, a freshman special teams standout, routinely stunned the coaching staff with long-range field goals — some as deep as 62 yards, and during the Trevians’ most pivotal game of the season, Doll was moments away from getting his answer.

But as Dugandzic lined up for the chance to kick a 52-yard field goal to complete an improbable New Trier comeback, a near-perfect summation of the Trevians’ Week 7 contest occurred.

The Trevians committed a false-start penalty, pushing them outside of field-goal range and forcing their offense into a fourth-and-7 situation that it could not convert.

“It’s one of those games tonight that when we look back on it, I felt we were the better team in a lot of aspects of the game,” Doll said. “I felt they were more disciplined, more structured and didn’t make errors in key times. So credit to them for not getting penalties in key situations, and we play undisciplined football a lot of the game.”

New Trier had the opportunity for the late heroics thanks to a late fourth-quarter touchdown run by Nevan Cremascoli followed by a perfectly executed onside kick by Peter Frame who angled a low, speedy, skipping kick toward the sideline, where the ball jumped into the arms of Finn Cohan.

The Trevs fell into a hole early, when for the second time this conference season, the Trevians were plagued by a slow start.

After a brief opening series from New Trier’s offense, Glenbrook South embarked on a 12-play, 83-yard scoring drive finished off with a three-yard score from South’s senior running back Will Collins.

The Trevians gained just one first down in the opening quarter and allowed the Titans’ offense to dominate possession for much of the first half.

Glenbrook South closed out the first half with a 35-yard field goal to give it a 10-0 lead at the break.

South’s 141 yards of offense in the first half nearly doubled New Trier’s 80.

“The first half was absolutely brutal,” Doll said. “We started really slow tonight. We expect to really score points and to be down 10-0 at halftime and really not have a lot of production on offense (was disappointing). Defensively, to be honest with you, if you told me we were going to hold them to 10 points in the first half, I would have been pretty happy with that.”

New Trier’s defense delivered an ideal start to the second half, forcing a Glenbrook South three-and-out thanks in part to a key sack from Cohan.

The Trevians offense, though, converted strong field position into points as a 25-yard field goal from Frame trimmed South’s lead to 10-3, but the inability to punch home a touchdown was one of several missed chances that hurt New Trier in the conference loss.

The Titans and Trevians traded touchdowns on their next two drives, leaving South with a 17-10 lead going into the final quarter.

Quarterback Nevan Cremascoli and wide receiver Alex Mendes connected on a beautiful 14-yard pass — one play after a spectacular 35-yard catch by Josh Kirkpatrick — to finish the drive.

The tide seemed to have turned for a motivated New Trier defense. The unit looked to have forced a fumble and possible return touchdown on South’s next possession. But the official quickly ruled the ball-carrier was down before the fumble in a call that upset the Trevians’ sideline.

Two plays later, Titans senior Matt Burda rushed to pay dirt from 47 yards away to give GBS a 26-17 lead with a couple minutes to play.

Still fighting, the Trevians marched 80 yards — thanks to a big 62-yard gainer by Alex Mendes — and Cremascoli scored from 1-yard out to cut Glenbrook South’s lead to 26-24.

New Trier recovered the onside kick to set the stage for a final scoring effort. But after the penalty, a slew of GBS pass-rushers hit Cremascoli as he threw, forcing an errant throw that was intercepted by the Titans.

“I knew we could play with them,” Doll said. “This was more of a slow start when you look at the game. When you start slow like that, you pay the price. I think we easily could have been in a better situation.”

New Trier’s offense came to life in the second half, scoring all 24 of its points. The Trevians were led by their seniors against the Titans.

But despite the strong showing in the final quarters, New Trier’s leaders are not pleased with the offense’s slow start.

“The two conference games that we’ve lost this year, we’ve gone close to three and out on the first few drives and that’s just not acceptable for an offense where we know what we’re capable of and what our ceiling can be,” Cremascoli said.

The Trevians will now shift their focus to a Week 8 matchup with Niles West next Friday night when they’ll return home for senior night and again have the chance to become playoff-eligible by earning their fifth win.

“I think the big focus next week will be that (fifth win for) playoffs but it’s also our senior night,” Doll said. “So it will be a big focus on just kind of celebrating our seniors, all they’ve been through, whether it’s one year or four years in our program.”