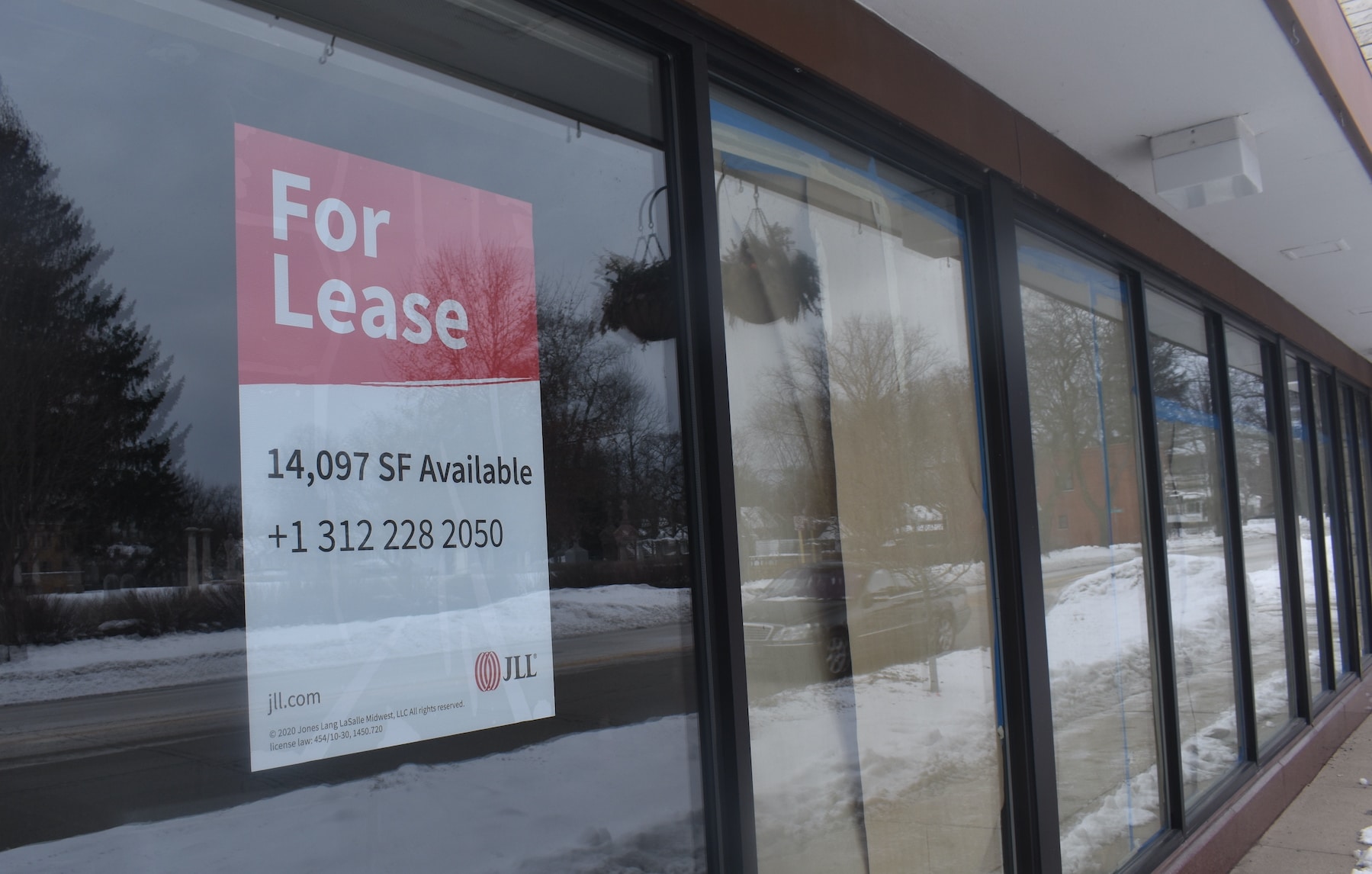 The business vacancy rate in Wilmette continues to improve, but local officials are still pressing to fill noticeable unoccupied storefronts.

Trustees talked through the most-glaring vacancies with Lucas Sivertsen, the village’s business development coordinator, as he gave a presentation during the regular Village Board meeting on Tuesday, Sept. 28.

Sivertsen told the board that the vacancy rate has fallen to 8.2 percent, or 34 vacancies among 388 storefronts, a significant decrease from a pandemic high of 11.86 percent in January. The rate was 9.9 percent in May, the last time Sivertsen addressed the board.

Sivertsen said six of Wilmette’s nine business districts have filled vacancies since May, while the other three districts have not lost any tenants in that time.

Much of the conversation focused on the empty Treasure Island storefront just north of Lake Avenue on Ridge Road.

The grocery store abandoned the location in 2018, and attempts to fill the 14,000-square-foot space have been largely unsuccessful.

Reportedly the space is leased to Goodwill; however, the nonprofit decided the space would not work for one of its resale operations, Sivertsen said, and is seeking a sublease.

Sivertsen and Village Manager Mike Braiman told the board that they are lending a hand in seeking an appropriate user — primarily grocers — for the large space, but it has not been easy.

“My understanding is the biggest hurdle for grocers is the location, the size and the amount of parking,” Sivertsen said to stressed laughter from the board.

“Other than that … ” Trustee Peter Barrow said with a chuckle.

Despite the obstacles, Sivertsen said Goodwill, which is paying rent on a location it is not using, is motivated to find a partner and has seen some interest from independent grocers and even a day-care facility.

The Village of Wilmette has also reached out to prospective tenants.

“I think this is a good example of how we don’t take no for an answer,” Braiman said. “ … We’re going to continue our efforts until we know the space is filled.”

Barrow said residents should “appreciate” that the Village is proactive in its approach to filling vacancies like Treasure Island and others.

Trustees and Sivertsen discussed other long-term vacancies (two or more years), such as the former Carson’s Pirie Scott and Sports Authority properties in Edens Plaza.

The Lake and Skokie district, which encompasses Edens Plaza and Westlake Plaza, has a 17 percent vacancy rate, according to village documents.

Sivertsen said in a memo to the board that the shopping centers have recently improved their rate and two vacancies may soon be filled.

Another problematic business pocket in Wilmette is the 100 block of Green Bay Road, where three storefronts — 101, 123 and 135 Green Bay Road — have been vacant for more than two years. There are others in that area also vacant, such as the former Firefly restaurant.

Trustee Kathy Dodd called that stretch of Green Bay Road an “entrance into the community” and asked for staff to keep that in mind while developing strategies to find occupants.

“The fact that we have several businesses not open just is concerning in setting the sort of vibrant community we want,” she said. “Of course, when people get to the Village Center they’ll see differently, but it is something we should be aware of as we see these economic developments.”

Trustees inquired about the potential benefit of economic incentives to attract businesses. Currently, according to Sivertsen and Braiman, the village has limited formal incentives in place but leaves options open on a case-to-case basis.

When the Village was attracting its first hotel in 2014, Sivertsen said it worked out a rebate with the owners of Residence Inn.

In aggregate, however, Braiman said incentives have not proven effective.

“We’ve been more aggressive in our thought process in terms of incentives over the past two years for the right uses,” he said. “And we’ve made overtures to certain businesses for some of the spaces we are talking about and that hasn’t been enough to push it over the finish line.”

Sivertsen closed the presentation by touting the village’s agreement with the Chicago North Shore Convention and Visitors Bureau, which he said will allow the village to market itself more significantly locally, regionally and nationally.