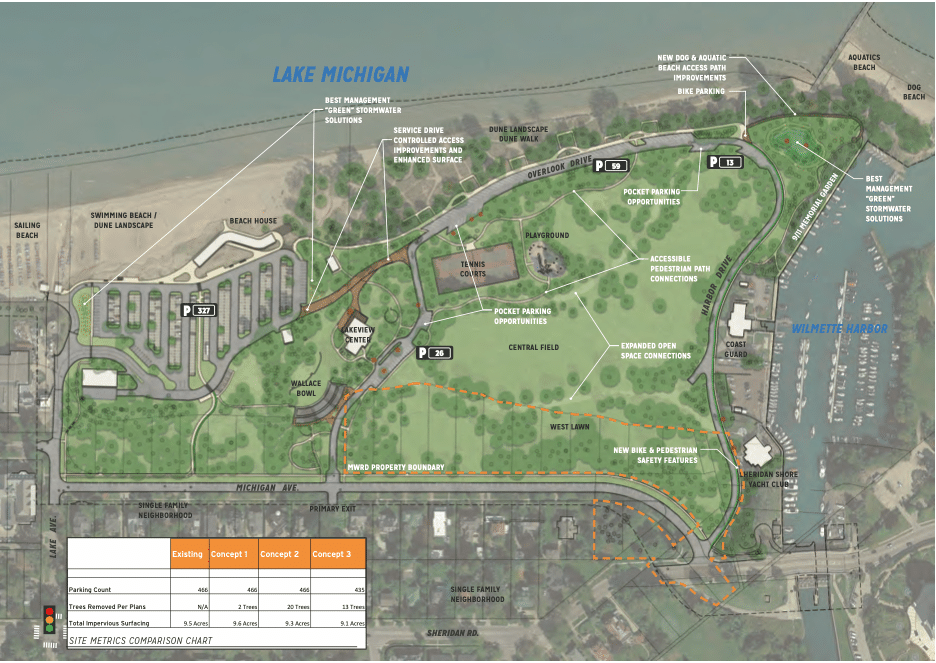 Gillson Park Master Plan Concept 3 of 4 as presented to the Park Board on Monday, Sept. 27.

On the heels of a summer of heavy public feedback, scaled-back Gillson Park improvement plans found their way to the Wilmette Park Board Monday night.

During the board’s committee of the whole meeting, the Lakota Group presented to park commissioners four conceptual plans that focus on safety and infrastructure and avoid many bells and whistles floated over the past nine months.

“We heard (from residents) a resounding ‘Keep it simple, less is more, keep it green, we love our park,’” Lakota’s Deb Salmon said about the community surveys and in-person feedback gathered at a handful of spring and summer events.

Through the process, more than 1,800 survey responses were collected and more than 350 people attended the in-person events, according to the presentation.

The honed concepts were the next step in the Gillson Park master plan process that began in late 2020 and is slated to end in late 2021.

Before then, community members will have multiple opportunities to provide feedback on the latest park designs, including during an open house and survey, both set for October.

Initial Gillson Park upgrade concepts received strong criticism from residents, many of whom thought the ideas overreached and were unnecessary for Wilmette’s flagship park.

The early stages of the process inspired the creation of the grassroots group Keep Gillson Green, which has worked to encourage public participation and project transparency. Many of the group’s members live along Michigan Avenue abutting Gillson Park and have been consistent voices during the planning process.

At the meeting Monday, Sept. 27, the Park Board viewed four concept plans that feature small-scale improvements and in some cases increase green space.

Lakota Group President Scott Freras explained that pieces from each plan can be transferred to another plan and the goal is to piece together an ideal plan for the park.

In summary (for a site map of the concepts visit this Gillson Park Comprehensive Plan web page):

• Concept 2: All improvements from Concept 1; Plus removal of Middle Drive to increase green space and addition of walking path connections to south and west of tennis courts.

• Concept 4: New entry to park off Michigan Avenue with separate pedestrian entry with looped path down to beach; Removal of Middle and Upper drives; Added pathway from Overlook Drive to the Lakeview Center and main parking lot; Added walking-path connections to south and west of tennis courts

The presentation also featured “add-ons,” or options for park amenities that can be added to any plan. They include: a bathroom shelter or just a shelter near the tennis courts, a new sailing beach facility, and a “boardwalk” and benches along Overlook Drive.

Seven residents addressed the board following the presentation, many of them offering similar comments that park district officials have heard for months, in regard to limiting upgrades to the beloved park.

Commissioner Cecilia Clarke believes that the board and park district listened and implemented the feedback.

“It upsets me that we have plans here that show a large swath of additional green space yet we are being questioned that we are not creating green space that we are paving over Gillson,” she said.

Residents have also complained about the survey length and content. Commissioner Ali Frazier requested that she or other commissioners are involved in the construction of the next survey set for distribution in October — an idea seconded by Commissioner Kara Kosloskus.

Board President Mike Murdock said the district can be more effective in collecting feedback this time around.

“Just because we didn’t do it perfectly the first time, doesn’t mean we’re done doing it,” he said. “We will continue to listen and continue to ask.”