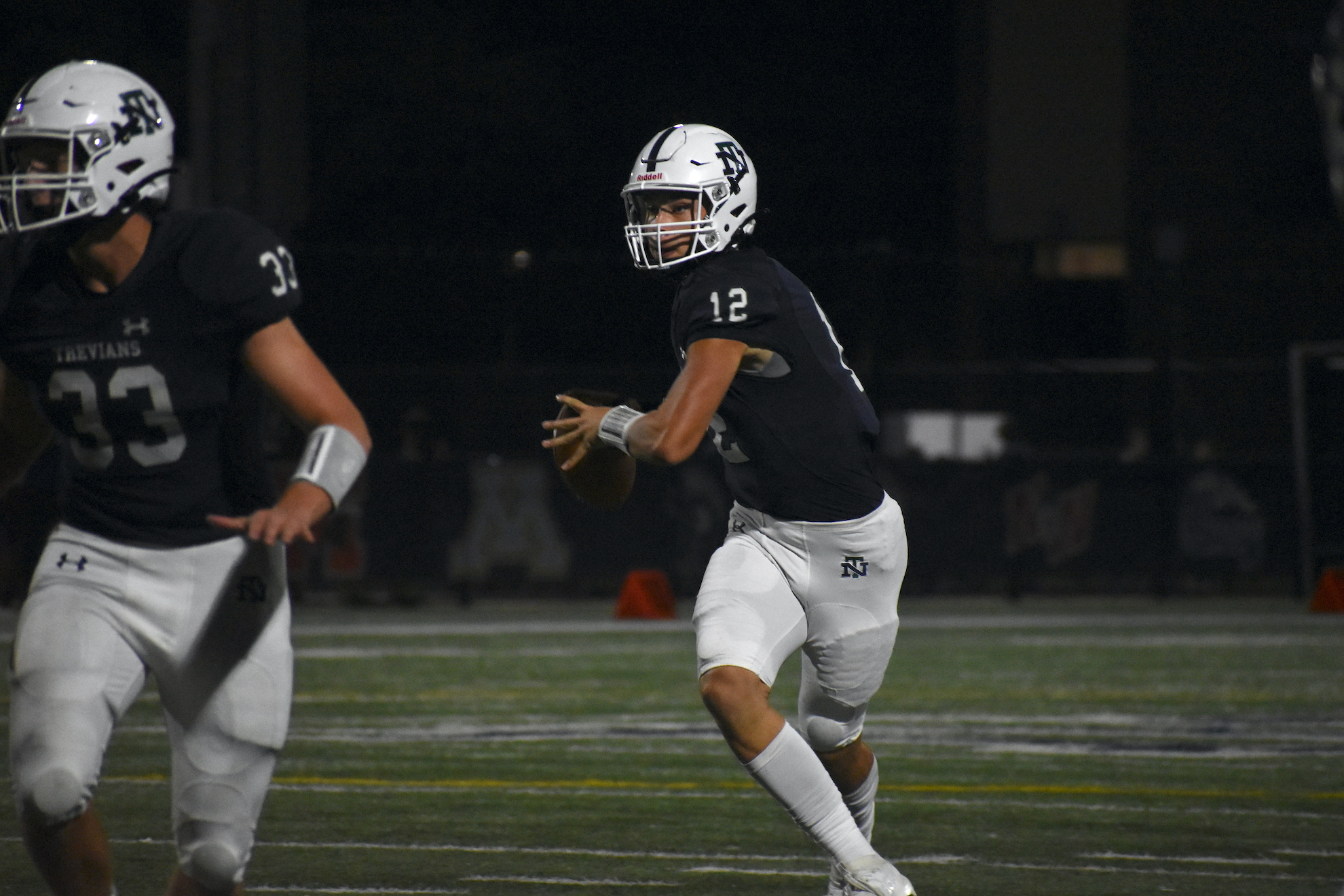 New Trier quarterback Nevan Cremascoli looks to fire a pass during the second quarter of the Trevians 32-14 win over Stevenson on Friday, Sept. 3, in Northfield. | Joe Coughlin/The Record North Shore

New Trier’s coaching staff entered the season with the expectation that Nevan Cremascoli would beat opposing defenses with both his passing and running abilities. It took the senior quarterback only two games to turn that belief into reality.

Cremascoli did it all for New Trier’s offense during the Trevians’ 32-14 win over visiting Stevenson on Friday, Sept. 3, in Northfield. The three-year starter threw for 211 passing yards and rushed for 52.

“Nevan was really in control of the game tonight,” New Trier head coach Brian Doll said. “He did a great job running and throwing. He was kind of in command of everything.”

Cremascoli accounted for three of the Trevains’ four total touchdowns, as he fired two touchdown passes and rushed for one. The senior captain knows that moving the football any way he can goes a long way in the team’s success.

After a sluggish start in their season-opening game against Lyons, the Trevians emphasized a fast start and sustaining offensive drives in Week 2.

The Trevs opened the game with a 10-play, 75-yard scoring drive that was finished off with a 5-yard rushing touchdown by Cremascoli.

“I have high expectations for our offense and I thought they were excellent right out of the gate tonight,” Doll said.

“We were just kind of in rhythm the whole night and that was what we expected out of (the offense),” Doll added. “ …  To put up that many points against them and to feel very confident marching the ball down the field was just a great way to transition from last week to this week.”

The Trevs jumped out to a two-score lead in the second quarter when they produced a 40-yard scoring drive that was finished off with a 1-yard touchdown run from senior running back Jack Cummings.

New Trier added a two-point conversion on a trick play where Josh Kirkpatrick, disguised as the extra-point holder, took the snap and tossed a pass to Finn Cohan.

Stevenson’s offense showed its first sign of life on its next drive, scoring its first touchdown of the game on a 59-yard run that trimmed New Trier’s lead to 15-7.

New Trier wasted no time in answering the Patriots’ score, though. The Trevians ended the first half by driving 67 yards in nine plays to take aa 22-7 lead

The scoring drive was capped off with a 10-yard strike from Cremascoli to Kirkpatrick, who hauled in an on-the-money, back-corner pass from the quarterback.

“Right when I ran the route, I realized that I was wide open and luckily Nevan gave me a good enough ball where I went and got it,” Kirkpatrick said of the play. “I didn’t even know if I was in or out until the referee signaled touchdown. It was really nice.”

Through two games, Cremascoli and Kirkpatrick have connected nine times already for a total of nearly 150 yards. The duo has built a special connection during their years on varsity, in part because of their experiences together as quarterbacks last offseason when Kirkpatrick was New Trier’s back-up.

“We know all the plays really well and both of us really understand conceptually defenses and how to beat them,” Kirkpatrick said. “He knows when to throw it and I know when to look for it, so it’s a really good connection.”

Cremascoli knows their bond off the field leads to success on the field.

“Me and Josh are teammates but we’re as good of friends as teammates as well,” he said. “Josh is a really good player. He’s a really smart player, and he’s willing to do whatever he can for the team.”

An interception on Stevenson’s first drive of the second half by Jack Brewer led to another New Trier score, as Creamascoli fired a 33-yard touchdown pass to senior Everett Cook to give New Trier a 29-7 lead.

Although the Trevs offense ran smoothly, the team is still fine tuning its defense, which replaced nearly all of its starters from a year ago and surrendered plenty of yards to the Patriots’ strong running game.

“I think we were up and down a little bit on defense,” Doll said. “I think our tackling needs to improve. We had a big turnover at one point with the interception, which really helped us and gave us some momentum at that point in time. We’re not giving up a lot of big plays — we gave up one tonight — but outside of that we’ve been able to limit a lot of the big-play potential and that’s been good.

“We have to still create some depth on the defense and we’re rotating some guys. As I’ve said, it’s a work in progress with having nine new starters there, so I think every time we can get the opportunity to play as a defense and get better, we’re going to learn some things.”

The Trevs will have little time for learning as they will now prepare to welcome perennial 8A powerhouse Barrington to Northfield next Friday night.

After an opening-week 19-0 defeat to Warren Township, the Broncos bounced back with a 42-0 shutout victory against Wheeling in Week 2.

New Trier is off to an undefeated start but the team is far from satisfied — and they’ll have a chance to prove their mettle next week.

“I think the main thing for us is not being satisfied being 2-0,” Doll said. “We want to have a long season. You know you don’t have six games this year, you have nine guaranteed and then you’re hoping to play further into October and November.

“We want to focus on getting ourselves to 3-0. We want to take one game at a time and get better and better. Offensively, we cleaned up a lot of things tonight. Defensively, we’re going to have to be better to stop Barrington.”