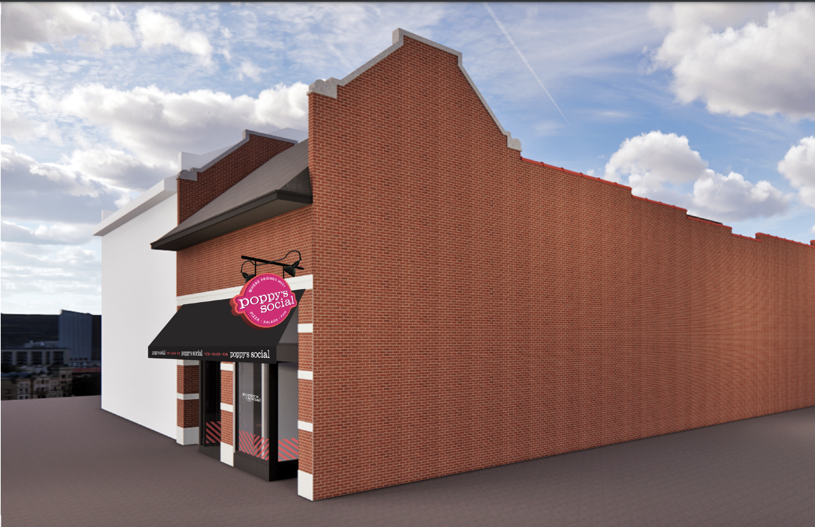 Poppy's Social, a new restaurant set to open at 668 Vernon Ave. later this summer, received approval for its outdoor patio last week. | Rendering courtesy of the village of Glencoe.

A soon-to-be addition to Glencoe’s dining scene has the green light for its contentious plans for an outdoor patio, but it will need to comply with several conditions to stay in operation.

Glencoe’s Village Board approved on Thursday, July 15, an ordinance that allows for a Class B-2 liquor license for Poppy’s Social, a restaurant set to open at 668 Vernon Ave. in late August.

The approval increases the number of available liquor licenses in the village, making the creation of the license for Poppy’s Social permissible. Before trustees’ approval, Glencoe had seven Class B licenses available under its village code.

Trustees voted 5-1 to approve the ordinance, which then subsequently allows the liquor license commissioner in Glencoe to issue the license. Trustee Peter Mulvaney dissented in the vote.

The liquor license for Poppy’s Social — which has not yet officially been issued but is expected to be this week — is subject to several agreed-upon conditions that will limit the restaurant’s use of the rear outdoor patio.

Conditions attached to the restaurant’s approval stem from fierce opposition from nearby residents regarding the proposed hours of operation, levels of noise and overall size of the patio.

Original plans submitted by the restaurant called for an 84-seat outdoor patio located in the rear of the property. Additionally, the applicant also initially proposed six live, outdoor music events a year.

The conditions of approval, which all relate to the outdoor patio and its potential use, set restrictions on capacity, hours of operation and the impact of sound.

Glencoe officials are limiting seating in the patio to no more than 36 people, a reduction that Roin said should “reduce the noise.”

The village is also proposing to enclose the patio tables and chairs within a tent that includes sound-limiting material applied to the ceiling and possibly to the side, Roin said.

Conditions on the hours of operation for the patio are that it can be used until 8 p.m. Sunday-Thursday and 9 p.m. Friday-Saturday.

Village officials are also prohibiting any music or amplification on the patio, Roin noted at the meeting.

“I think it’s been a positive process,” Roin said. “We are grateful for everybody who has come forward. This is your village. This is where you live. We know that you care about it and I want you to know that all of us care about it too. Our goal here is to do what is best for the village. We reconcize that we probably can’t give everyone everything that they want.

“ … What we’re proposing is what we hope is compromises that will allow the restaurant to proceed without disturbing your family life.”

The anticipated liquor license will be for six months, according to Roin, who said “during the period the license is operating, our plan is to review the way it’s working.”

Roin added that he believes the village is “really getting it right” because it is a short-term arrangement and that officials are “committed to fixing” anything that doesn’t go according to plan after this “first experiment.”

If conditions are violated, Glencoe can pull the liquor license after the first six months, Roin and Elrod said at the meeting.

Locals have expressed strong opposition toward the proposal throughout its proceedings through village deliberations.

Before the conditions of approval were set, more than three dozen Glencoe residents signed a petition to restrict the use of the back patio on the property.

Despite what officials called “compromises,” eight residents still addressed the board during the public-comment portion of the village board meeting.

Several residents questioned the proposed hours for the outdoor patio, urging officials to further limit the acceptable times the restaurant can use it.

Resident Peter Downie, who lives on nearby Greenwood Avenue, said he appreciated the compromises that were made but he called the proposed allowed times “aggressive.”

Josh Hilton, who also lives on Greenwood, said having the noise present after 7 p.m. on weeknights would be “disruptive.”

Peter Kadens, the applicant and restaurant’s proprietor, thanked residents for being “considerate” throughout the process.

“This is a tough process,” he said. “No one likes losing even a little bit and everyone here is going to lose a little bit. And I commit to the trustees, the neighbors and to the village, to the extent you have concerns, you should bring them to us.

Kadens later said that “we’re going to do our best to be good listeners and good stewards and corporate operators in this community.”

A resident of Glencoe, Kadens previously told The Record that the name Poppy’s Social is “meaningful and symbolic.”

Kadens said the original inspiration for the name was CNN reporter Poppy Harlow, whom he described as a good friend. The ownership group also finds value in the poppy flower, Kadens said, describing it as the flower of “remembrance and resurrection.”

“Our restaurant is focused on remembering the damage done to our urban corridors over the last 40 years and employing folks from those disinvested communities to help them and their communities resurrect their lives through a hand up and a real opportunity,” Kadens said in an email.

He later added that the restaurant will be a “great gathering place for our community.”

Officials are hopeful that Poppy’s Social will be the latest addition to an increasingly lively dining scene in downtown Glencoe.

“I have lived in Glencoe for almost all of my life,” Roin said. “Glencoe was a place where restaurants came to die. It is exhilarating for me and probably for a lot of residents that all of the sudden we have a business district that has restaurants that people want to go to. We hope that Poppy’s Social will be one of them. At the same time, (the village) understands that you’re entitled to live where you live and you’re entitled to not be miserable. What we’re trying to do here is to accommodate both as best we can.”

This is the second time in as many years that a restaurant is taking a swing at the vacant property in downtown Glencoe, which used to house the Art Store Gallery. Last spring, Glencoe’s Plan Commission approved an exterior appearance review for a restaurant at the same location, but Glencoe officials previously told The Record the team behind the restaurant scrapped opening plans last summer.