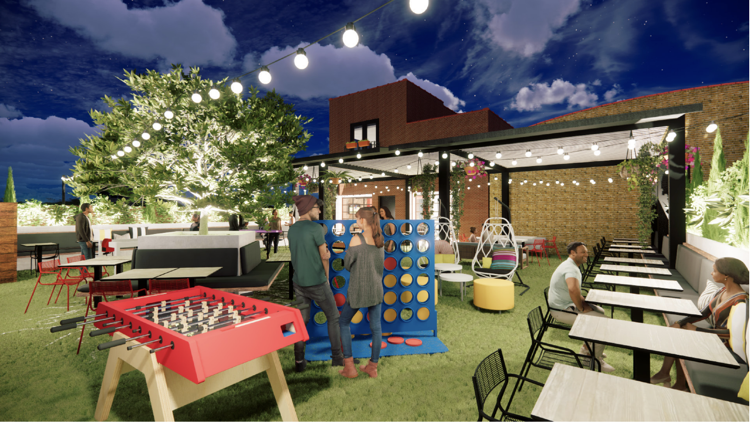 Glencoe's Plan Commission will not conduct an exterior appearance review this Wednesday night for part of a restaurant proposal in downtown Glencoe that once included an 84-seat outdoor patio. The applicant withdrew the patio element of its proposal late last week. | Courtesy of the Village of Glencoe.

Editor’s Note: This story was updated Tuesday, May 25, to reflect a change in the applicant’s proposal. The applicant’s previous request for an 84-seat outdoor patio was withdrawn prior to the Glencoe Plan Commission’s meeting. Commissioners will not review that aspect of the original proposal on May 26 but could do so at a later date.

An applicant’s proposal to convert the vacant storefront at 668 Vernon Ave. in downtown Glencoe into a restaurant with an outdoor patio no longer includes a contentious aspect that was drawing ire from nearby residents.

Glencoe’s Plan Commission was set to conduct an exterior appearance review Wednesday, May 26, for the proposal, which included an 84-seat outdoor patio and music venue in the rear of the building.

But the project’s applicant revised its proposal late last week, removing the outdoor dining patio and changes to the north wall. Village documents say the removal of these aspects was done so at the request of the applicant.

A village memo from Taylor Baxter, Glencoe’s development services manager, says the applicant “has indicated that this component may return for exterior appearance review at a future date.”

Glencoe Commissioners will only review the appearance of the proposed screening of the rooftop mechanical units that are visible from the right-of-way or neighboring properties during their May 26 meeting, the memo says.

The Record’s reporting on the applicant’s original proposal to the village can be found below.

A proposal for a new addition to downtown Glencoe will make its way back in front of Glencoe’s Plan Commission for a second round of consideration months after officials OK’d initial plans.

Commissioners will conduct an exterior appearance review this Wednesday, May 26, of a proposed restaurant and outdoor patio at 668 Vernon Ave.

As previously reported by The Record, an applicant wants to convert the vacant storefront — formerly the Art Store Gallery — into a restaurant with an outdoor patio.

The potential addition to Glencoe’s dining scene received its first round of necessary approval earlier this year. The Commission’s March consideration involved the applicant’s renovation of the property’s facade.

Original proposal documents listed the restaurant’s name as GT’s Pizza; however, applicant Pete Kadens said its final name is Poppy’s Social, which he said is more “meaningful and symbolic.”

Kadens said the original inspiration for the name was CNN reporter Poppy Harlow, whom he described as a good friend. The ownership group also finds value in the poppy flower, Kadens said, describing it as the flower of “remembrance and resurrection.”

“Our restaurant is focused on remembering the damage done to our urban corridors over the last 40 years and employing folks from those disinvested communities to help them and their communities resurrect their lives through a hand up and a real opportunity,” Kadens said in an email.

He later added that the restaurant will be a “great gathering place for our community, so it’s very social.”

According to its proposal, the applicant is now requesting plan commission review for multiple components of its request, including rooftop units and screening and an outdoor patio and awnings.

The applicant’s current plans propose an 84-seat outdoor patio, which would be located in the rear of the property, documents detailing the proposal show. Currently, a wood fence separates a parcel located on the subject property of 668 Vernon Ave. from the neighboring property at  662-666 Vernon that is under the same ownership, according to village documents.

Plans call for the removal of the separating fence and subsequent installation of an AstroTurf outdoor patio space with “retractable pergolas, landscaping, a large tree, and a new wood fence,” village documents say. According to the proposal, the patio would extend from 668 Vernon onto part of the 662-666 parcel.

Additionally, the applicant is proposing six live, outdoor music events between May and October.

Several Glencoe residents expressed concern regarding the proposal during the Village Board’s May meeting.

John Byrne, a nearby resident who lives on Greenwood Avenue, said the proposal “is not an acceptable use of this commercial property abutting a residential area.”

“This would be the first such entertainment-oriented patio in our town and it doesn’t belong here,” he said in part. “It belongs in Wrigleyville maybe, but not in Glencoe.”

Two other Glencoe residents who live nearby shared similar concerns, saying the patio is too close to their homes and “does not respect the transition between downtown and the residential community.”

According to a memo from Taylor Baxter, Glencoe’s development services manager, to the Plan Commission, exterior appearance review approval or denial is determined “at the discretion of the Plan Commission and does not require action by the Village Board.”

If Glencoe commissioners deem the proposal is “consistent with the village’s design guidelines, staff recommends approval of the request as submitted,” the memo says.

This is the second time in as many years that a restaurant is taking a swing at the vacant property in downtown Glencoe. Last spring, Glencoe’s Plan Commission approved an exterior appearance review for a restaurant at the same location, but Glencoe officials previously told The Record the team behind the restaurant scrapped opening plans last summer.

Public comments can be submitted prior to the meeting by phone or by email. For more information on pre-submitting comments, click here.