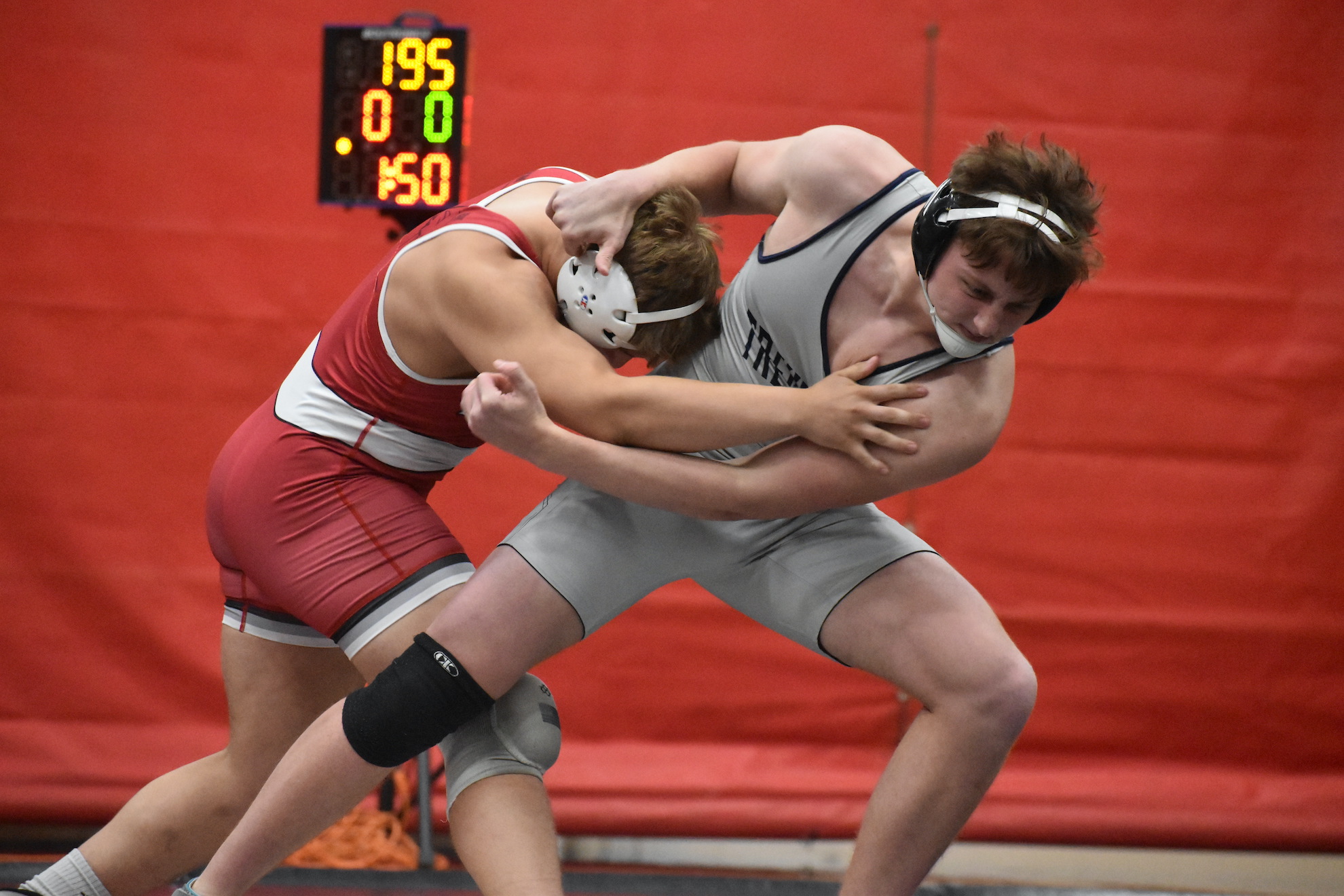 Revenge is a dish best served against Maine South — at least if you were a New Trier baseball player or wrestler this past week.

On Monday, June 7, the Trevian baseball team took out the Hawks in postseason play, just a week after Maine South beat New Trier twice in the regular season.

Then on Thursday night, June 10, Trevians wrestlers bested the Hawks 39-26 in the season finale to take back the Central Suburban South title it lost in dramatic fashion last season.

“We lost to Maine South in a close match last year and it’s great to bring back a title to New Trier and it was a team effort,” New Trier coach Marc Tadelman said. “A couple kids lost there but they fought hard and didn’t get pinned and I think that was the difference tonight.”

New Trier grapplers won eight of the 13 matches, including two victories by pin: Tommy McDermed (285 pounds) and Matthew Boyer (152). But the Trevs were down big early.

The Hawks built early leads of 18-3 and 24-9 in the early weights before the Trevs dominated the midweights. A pin by Boyer and two Maine South forfeits brought the score to 24-21.

Senior Liam Cummins’ 10-5 win at 171 pounds tied the match and set the stage for the Trevs big finish.

“I was a little disappointed I didn’t get (the pin), but a win is a win,” he said. “The kid was tough. I respect that. We had the same goal, getting points for our team.”

After Cummins victory, the teams split minor decisions before New Trier collected a third forfeit and a penalty team point for unsportsmanlike conduct on the Hawks to take a 33-26 lead.

The final match did not technically matter, but Montgomery finished it in style with a pin in 30 seconds.

“Our guys were going hard and not getting pinned and we did get some pins. That certainly helped,” Tadelman said. “They had a few guys out (of the lineup); I don’t know what that was about but we were confident in those weights too.”

The win completed an undefeated conference season for New Trier, as it won its first CSL crown since 2017.

The 2020-21 wrestling season was one of the most volatile of the pandemic-plagued school year. Considered a higher-risk sport by state officials, it did not meet state guidelines to continue in the winter. In the late fall of 2020, IHSA officials preemptively pushed wrestling to a “summer season.” It was the last IHSA sport to begin this school year and it would have no official postseason.

“They beat us last year in a close match. It came down to the last match and that didn’t set well with us,” Tadelman said. “Our kids worked hard all offseason. We put this one on our calendar. We were hoping we’d have a season so we could get our victory against them this year.”