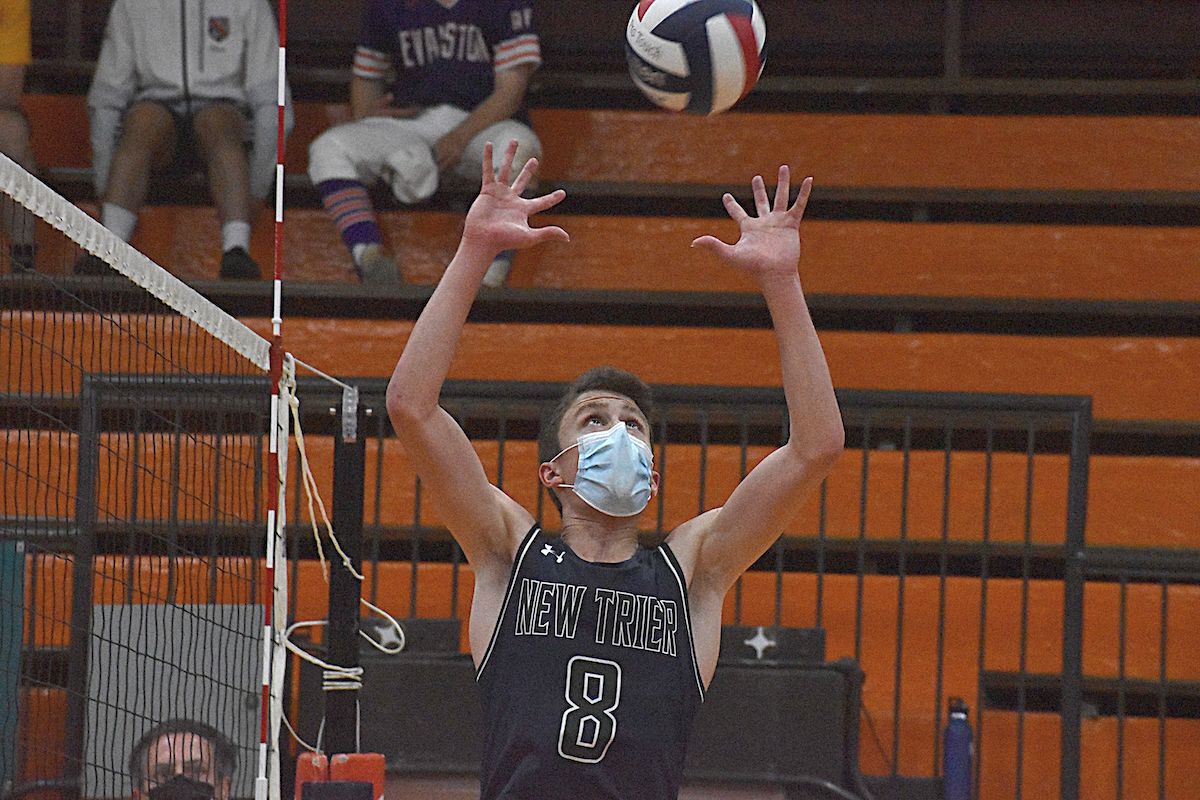 New Trier's Stefan Gjaja readies for a set in a recent win over Evanston. | The Record File Photo

Gyms, fields and pools are busy once again on high school campuses across the state.

Spring sports teams — which are playing in the IHSA “summer” season because of COVID-19 delays and disruptions — are working through their schedules a year after a canceled season.

Most are also preparing for a much-anticipated postseason, but not all. Because of the state’s sports safety guidelines under Phase 4 of the reopening plan, boys volleyball (a medium risk indoor sport) and boys lacrosse (a high risk outdoor sport) will not play a full state series.

That still could change, however.

With the spread of COVID-19 continuing to slow and vaccination rates continuing to grow, Gov. J.B. Pritzker announced on May 6 his goal of reopening Illinois, which the state calls Phase 5, by June 11.

With the IHSA summer season set to conclude on June 19, outside of boys and girls water polo (May 29), there would still be time to coordinate a full postseason for boys volleyball and boys lacrosse, if mitigations are eased on June 11, according to Augie Fontanetta, New Trier High School’s athletic director and IHSA board member.

Fontanetta said that the IHSA’s plans fall in line with the state’s guidelines, but the organization does create contingencies if those guidelines change — like if the state loosens mitigations.

“We’re going to talk about it,” he said. “We want all of our sports to culminate in state championships. We have a Plan A and a Plan B for sports like boys lacrosse. Hopefully in the next couple weeks we have more direction.”

Currently, boys lacrosse will play through a sectional round. Girls lacrosse — which is considered moderate risk by the state because significant contact is not permitted — is scheduled to play a full state series.

Boys volleyball teams will only get regional tournaments. Under Phase 4, the state places restrictions on the physical distance between competing medium-risk, indoor sports. In some potential volleyball sectionals, the rule would limit the teams, so the IHSA could not plan a full sectional schedule.

As of May 7, the Ramblers were 15-3 on the season and considered one of the best in the northern suburbs, if not the state. Postseason seeding is just two weeks away.

“These kids deserve it,” Ebeling said. “It’s similar with all spring sports, but at Loyola we had seven seniors we didn’t get to play last year, some of them were role players for three years and that was going to be their opportunity to play. It was heartbreaking. And juniors lost last year too. It’s for the kids, as long as we do it safely, and I haven’t seen any reason why we shouldn’t be able to.”

The Curious Case of Wrestling

Wrestling is the only sport remaining this school year that is considered high risk and competes indoors.

With COVID-19 numbers higher in the winter, the IHSA decided to push the wrestling season to the end of the school year, in the hopes of lower COVID numbers and loosened state restrictions.

The move paid off, and wrestling is underway — though, without a chance at an official state series.

The IHSA made it a point to add postseasons for spring sports, which were canceled in 2020, while winter sports like basketball and delayed fall sports like football and girls volleyball did not compete in state series.

Outside the IHSA, however, another organization has stepped in to offer a state tournament.

The Illinois Wrestling Coaches and Officials Association is planning a mid-June event that will feature tournaments for multiple ages and genders, according to Rob Porter, secretary of the IWCOA.

Just like the IHSA version, Porter said, the series will feature regional and sectional rounds with a state finale in Springfield.

“We feel like every season deserves a state championship,” he said. “We want to give kids the opportunity to be state qualifiers, state medal winners and state champs. Those are memories that are made every season.”

The tournament is not without its complications.

If state mitigations remain in Phase 4, the tournament would fly in the face of state guidelines, leaving participation up to each school and athletic department.

While many may bow out, individual wrestlers — whose high school seasons are over and who may have already graduated — could enter the tournament without a school affiliation.

While the IWCOA has a home for the final rounds, it is still looking for local facilities for regionals and sectionals to start in mid-June. The championships, which will feature different brackets for girls, freshmen/sophomores and varsity in three classes, are scheduled for June 21-25.