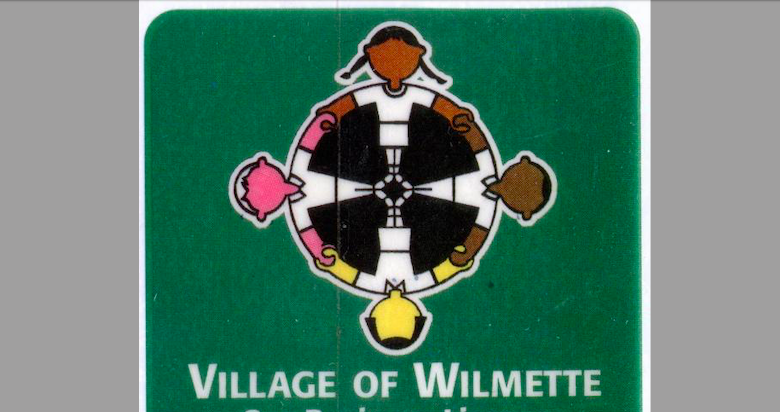 A design for a village sticker in 1995, which initially drew scrutiny from some, is explained in the program. | Wilmette Historical Museum

Local organizations are listening to Wilmette residents who want to confront the town’s racist past.

The latest results of that interest is a virtual presentation of “Racism in Wilmette: A Visual History” set for 7:30-8:30 p.m. on Thursday, May 20. The event is free and still open to the public.

The event is a collaboration between the League of Women Voters-Wilmette and the Wilmette Historical Museum, which launched an online exhibit of the same name in January.

“Basically, we have gotten a lot of questions about racism in Wilmette, so clearly it has been on people’s minds for a while,” said Rachel Ramirez, the museum’s curator. “But recently there have been more questions.”

The rise in interest stems from the police killing of George Floyd, 46, in May of 2020 in Minneapolis. Floyd’s murder sparked immediate outrage that went national after a witness’s recording of the crime circulated.

Wilmette, like many cities and towns across the country, featured a protest march in June called ”Wake Up Wilmette! Walk To End Racism.”

Later that summer, the local League of Women Voters hosted a virtual documentary screening of “The Color Tax: Origins of the Modern Day Racial Wealth Gap” followed by a panel discussion in how suburbs like Wilmette contributed to housing discrimination.

Anne Sullivan, the Wilmette league’s communication co-chairperson, said about 120 people attended the virtual events and many wanted to know more.

In response, Sullivan and company teamed with the historical museum for a more focused look at local racism in the hopes that it keeps an important conversation active.

“People really spoke up about wanting to learn more about our history. That is a key role that we play,” Sullivan said. “ … We do try to provide education; this time, we are just amplifying what the historical museum is already doing and then we will close with some comments about how people can get involved in this.”

The museum’s Kathy Hussey-Arntson and Ramirez will lead participants — of which there are more than 180 so far — through their online exhibit, which features 16 historical items that document racist trends and acts in Wilmette beginning in the early 1900s.

Among other things, the artifacts include newspaper clippings that report unjust housing practices and performance programs that promote insulting and racist minstrel shows.

Ramirez said the exhibit is not comprehensive and consists of resources available to the museum, which is still seeking materials that depict historical racism in Wilmette. Ramirez said any potential donors of such items can contact the museum at (847) 853-7666 or museum@wilmette.com.

“History plays a part in everything we do,” Ramirez said. “Nothing comes from nothing. Everything that happens in the community informs the community. For us in particular we know that the way the community is now is because of practices in the past.

“In the presentation we’ll talk a little about unfair housing practices that happened in the past but still has an impact on what the community is like today. … It’s essential we all know what happened in our town.”

According to 2019 U.S. Census estimates, less than 1 percent of Wilmette residents are Black, while 83 percent are White, 13 percent Asian, and 2.8 percent two or more races.

Sullivan said the LWV-Wilmette has a goal of making Wilmette a more inclusive community, and it isn’t the only one.

Revamping inclusion policies has been a focus of local government officials, while the Village of Wilmette reimagined its housing and human relations commissions, as reported by The Record.

The league, Sullivan said, plans to host more similar events to satisfy residents’ desire to learn about and from its past.

In that vein, Sullivan pointed out racism in the history of the League of Women Voters, which was not accepting of women of color for much of its existence.

“Without acknowledging how we got here we’re not truly educating ourselves,” she said. “We need to acknowledge the past. So this educates people on what has happened in the past and what we need to move forward from. … People who have not felt included need acknowledgement from us that this happened, and that is what it’s important to look at our history.

“And that is what we have heard from our community. That people want to look into this.”