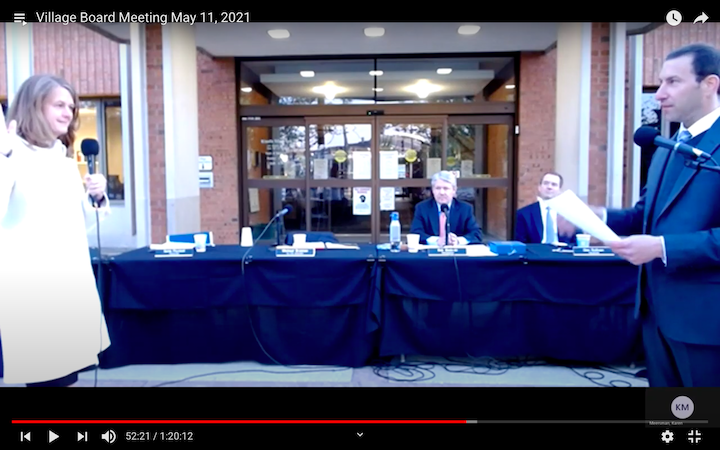 The Wilmette Village board’s Tuesday, May 11 meeting marked a night of firsts.

When trustees gathered outside Wilmette Village Hall for the board’s first outdoor meeting, it was also the first time the board met in-person since the onset of the COVID-19 pandemic in March of 2020.

Yet the setting for the evening’s proceedings served as a postscript to the night’s main highlight — the swearing in of Wilmette’s next village president and board of trustees.

“I’m very excited to move forward in this position,” she said. “It’s a great time to be in Wilmette. We’re moving out from the pandemic, looking toward Wilmette’s 150th birthday celebration next year and we are more resilient than ever.

“I look forward to working with all of the wonderful residents in our village. This is a fantastic place and I promise you and pledge to you that I will work my hardest.”

Plunkett also took a moment to pay tribute to her late mother, whom she described as “her biggest fan.”

“She was a true pioneer and achieved success despite some incredible odds,” Plunkett said. “She taught me the value of independence, hard work and acceptance.

“She was so excited for my campaign for trustee and was always trying to not-so-subtly encourage me to run for village president. I think she had a pretty good idea before she passed that I was going to go for it. And now with the one-year anniversary of her death having occurred this Mother’s Day, I know she’s been with me all along.”

Newly elected trustees Kate Gjaja and Justin Sheperd and incumbent Kathy Dodd were also sworn in at the meeting.

Plunkett also appointed to the board Peter Barrow, who finished fourth in the spring’s election and, as previously reported by The Record, will fill the remaining two years of Plunkett’s trustee term

Eight years after being elected Wilmette village president, Bob Bielinski thanked the community one last time for its attention.

The now-former village president presided over his final meeting of the board of trustees on May 11 as his second term came to an end.

Bielinski closed out his tenure with a message of appreciation, thanking “the many people who supported him during his time in office.”

“For the past eight years, it has been my honor and privilege to serve as your village president,” Bielinksi said.

“Village government exists to provide those critical municipal services that our residents rely on every day,” he said. “And government works well in Wilmette, and our residents have told us so.”

Board members thanked Bielinksi for his service to the community and his guidance as village president.

“It’s hard to thank you enough for your dedication to Wilmette but anybody that knows anything about you knows how much you deeply care about this town,” said Senta Plunkett, Bielinski’s successor in the position. “From driving around every neighborhood every time it rained to … literally walking every street of this entire town during the pandemic, I’m sure you got an enlightened appreciation for Wilmette from doing that.”

“You’re leaving Wilmette a far better place than when you joined this board eight years ago and you have all of our thanks,” he said.

The board also bid adieu to trustee Joel Kurzman during the meeting. Kurzman was elected to the board in 2017 and decided to run for village president this year.

Kurzman thanked the community for allowing him the opportunity to serve as a village trustee and shared his appreciation for village staff and his fellow trustees.

“The best part of being a village trustee is working with residents to solve the problem and further perfect our community,” he said. “I enjoyed getting out into the community, into the distinct neighborhoods of our village, where I appreciate the wide ranging subcultures and communities that exist.”

Four years after his election, Kurzman said he knows more about the village than he “ever would have expected when (he) moved here 16 years ago.”

Trustees expressed their admiration for Kurzman’s passion and dedication.

“I’ve always been impressed with your passion for this and your diligence,” Trustee Daniel Sullivan said. “You really found an issue and you got behind it. There was no question that you were committed to the residents and to the village. You worked hard and it was a great four years. I’ve enjoyed working with you. … You made a difference.”