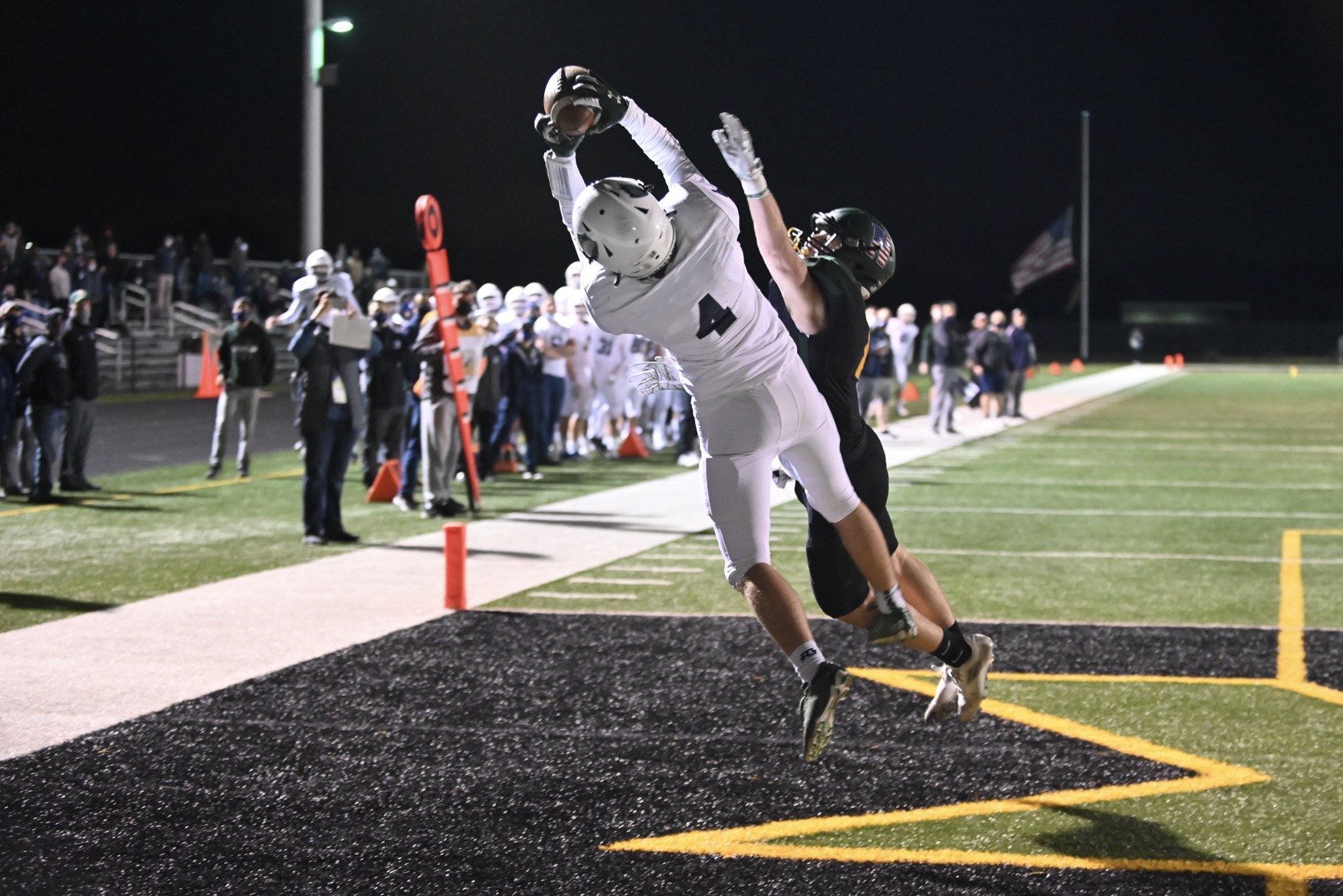 New Trier is exactly where it wants to be.

Thanks to a grind-it-out 15-6 win against Glenbrook North Friday, April 9, the unbeaten Trevians enter the final week of their conference schedule with the chance at the Central Suburban League South title.

New Trier will travel to Park Ridge Friday, April 16, for a matchup with the Maine South Hawks, a familiar nemesis that has stalled the Trevians’ league-championship aspirations in previous seasons.

The battle-tested Trevians believe they’ve earned their spot in the Week 5 bout, and they’ll look to seize the opportunity that they’ve worked months to achieve.

“I think one of the things that we’re going to do tomorrow is talk about the fact that we’re in a conference championship game. These kids have worked so hard in the offseason to get to this point,” New Trier coach Brian Doll said. “I just told them (tonight) that they have earned the right to play in this game. It couldn’t be better for everybody than to have it be Maine South versus New Trier for a conference championship, and both teams to be undefeated.”

“We weren’t as focused as I wanted us to be tonight, to be completely honest,” Doll said. “I’m happy that we got the win so that we can play for a conference championship next week, but to be totally honest, I think we were looking forward.

“We’ve tried all week to get them focused on this game and we kind of felt it when we got here. They weren’t as dialed in, and I’ll put that on me. It’s my responsibility as the head coach to get them more focused. You could see it right from the get-go. We just did not click real well tonight.”

The Trevians offense produced a solid start to the game, driving 65 yards into Glenbrook North’s red zone. But New Trier could not finish the drive, missing a 32-yard field goal attempt.

After forcing a three-and-out from the Spartans, New Trier put forth a 50-yard scoring drive that was capped off with a 10-yard touchdown run from senior Brody Roth, giving the Trevs a 7-0 lead late in the first quarter.

Roth, who finished the game with 56 yards rushing on 14 attempts, led a balanced ground game for the Trevs in Week 4. Chase Avery added 37 rushing yards on five attempts, while quarterback Nevan Cremascoli rushed for 41 yards.

New Trier’s offense struggled to move the ball for much of the game’s remainder, allowing Glenbrook North to keep the affair within striking distance all evening.

The Spartans put their first score on the board right before the end of the first half when senior quarterback Avery Burow fired a 9-yard touchdown pass. New Trier entered the half with a 7-6 lead after North missed the point-after attempt.

It wasn’t until late in the third quarter that the Trevians’ regained momentum on offense. A trio of New Trier juniors, Cremascoli, Josh Kirkpatrick and Jack Cummings, gave the Trevians the jolt they needed.

On first-down from the Trevs’ 47-yard line, Cremascoli delivered a 12-yard pass to Kirkpatrick. Two plays later he found Cummings for a 19-yard completion.

But the Trevians’ drive reached its pinnacle on third and 12 when Cremascoli tossed a 20-yard touchdown pass to Kirkpatrick, who completed the scoring play with a spectacular airborne catch over a Glenbrook North defender.

“When I saw the ball, all I was thinking is that I have to catch it,” said Kirkpatrick, who credited Cremascoli for tossing a “perfect” throw. “It’s a close game, if I catch the ball we’re up more, so all I was thinking about was the ball.”

The Trevians had been practicing similar plays, with the hope of connecting on a deep passing play.

“We’ve been working on that all week,” Doll said. “(Nevan’s) been throwing a pretty good deep ball. Josh Kirkpatrick … has been a big add-on for us.”

New Trier added two points midway through the fourth quarter when an erred Glenbrook North snap on a fourth-down punt attempt resulted in a safety.

Senior Tyler Hardin helped put the game on ice when the Trevs shifted to a wildcat formation for their final drive. Hardin racked up more than 50 yards rushing out of the wildcat, unraveling any of North’s hopes for a late comeback.

Hardin also caught three passes for a total of 15 yards from Cremascoli, who ended the game with 122 yards passing on 18 attempts.

New Trier committed three turnovers on offense, all of which occurred were interceptions. The Trevians know they will need to be better next week.

“I think we have to learn from the mistakes that we made tonight,” Doll said. “We had three interceptions tonight, and that is something we can’t have happen again. You can’t do that against a great team.”

Although struggles persisted on offense for the second straight week, the Trevians were once again stellar on the defensive side of the ball.

“This defense has worked really hard over the offseason,” said senior Luca Wojewski, one of the group’s leaders. “We have been really hard on each other to get in and lift. At the end of the day, we’re all friends. We all hang out together; we have a very, very close bond that I don’t think a lot of teams have. So I think that plays into the role of how well we are connected and how we all get to the ball and how well of a defense personally.”

Wojewski was again a disruptive force in the opposing team’s backfield, as he sacked Burow twice and was a key part of New Trier’s frequent pressure.

“There’s a lot of confidence (with our defense),” Doll said. “There’s only been one drive against us the whole year that’s gone up the field. … I’m just really confident in the way we’re playing. We’re playing fast on defense, not as fast as I wanted to tonight, but in general, we as a program and as a team right now feel very confident in our defense getting a stop.”