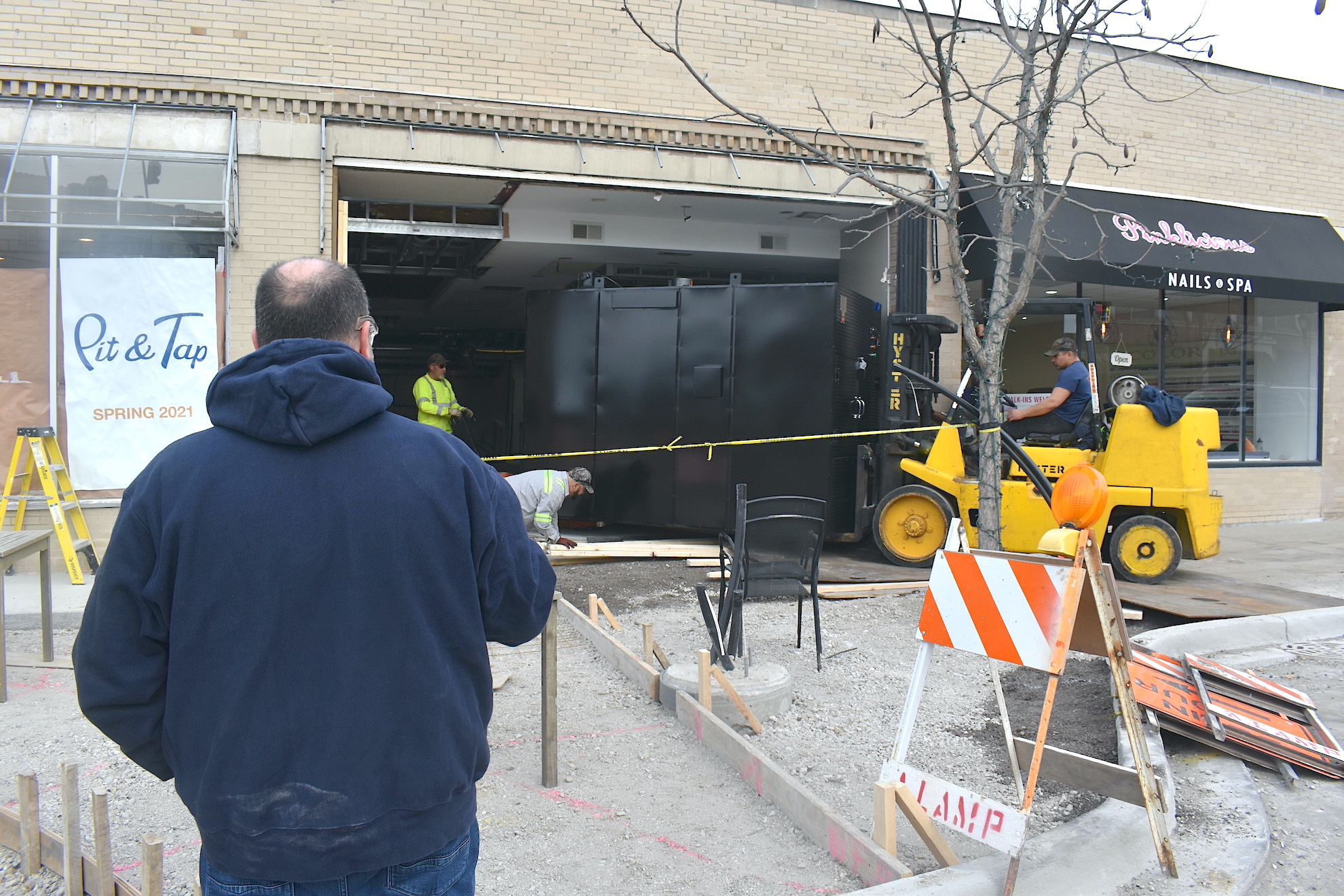 Earl Campbell was a bruising running back for the NFL’s Houston Oilers in the 1970s and ‘80s.

Because he knocked down what was in his path, one of Campbell’s nicknames was “the human wrecking ball.”

Along Wilmette Avenue Monday morning, April 5, a wall was already knocked down in anticipation of “Big Earl” coming on through.

In this case, Big Earl is a three-ton meat smoker delivered via forklift to new Wilmette restaurant Pit & Tap, which is set to open in early June.

Clake made the connection to Campbell because the smoker is the Oyler 1300 Model Barbecue Pit, from J & R Manufacturing out of Mesquite, Texas.

The pit was driven 1,000 miles to Wilmette on a flat-bed truck. A team of skilled workers then carefully maneuvered the smoker via forklift around downtown Wilmette construction and through the wide-open facade of 1168 Wilmette Ave., the former home of Nick’s Neighborhood Bar & Grill.

And even before all the activity Monday, Clarke’s crews had to reinforce the building’s floor and build a platform to hold the smoker, which is about 7 feet tall, 5.5 feet wide and 10 feet long.

“We’ve spent weeks making sure this isn’t going to go through the floor when we put this in there,” Clarke said.

A longtime restaurant consultant, Clarke purchased Nick’s in October 2020 and has been building out his Texas-style barbecue concept since.

Similar to Nick’s, Pit & Tap is a community effort, as Clarke said more than 20 Wilmette families invested in the new restaurant.

“Additionally, everything from logo creation, merchandise, web/social designer to our insurance agent, attorney and accountant all live in Wilmette,” Clarke said. “ It has been my goal to get as many people from our community involved.”

Big Earl, though, is the piece de resistance.

Over the years, Clarke said he’s eaten at barbecue joints all over the country, and to him, the Oyler smoker, which is also used by beloved West Loop barbecue spot Green Street Smoked Meats, is a cut above.

With Big Earl firmly in place, Clarke and his team can build around it with a full-service restaurant focusing on “the big four”: brisket, ribs, pulled pork and pulled chicken. Specials like burnt ends will also make the rotation.

With plenty left to do, such as install the retractable floor-to-ceiling front windows, Clarke is still hoping for an early-June opening.