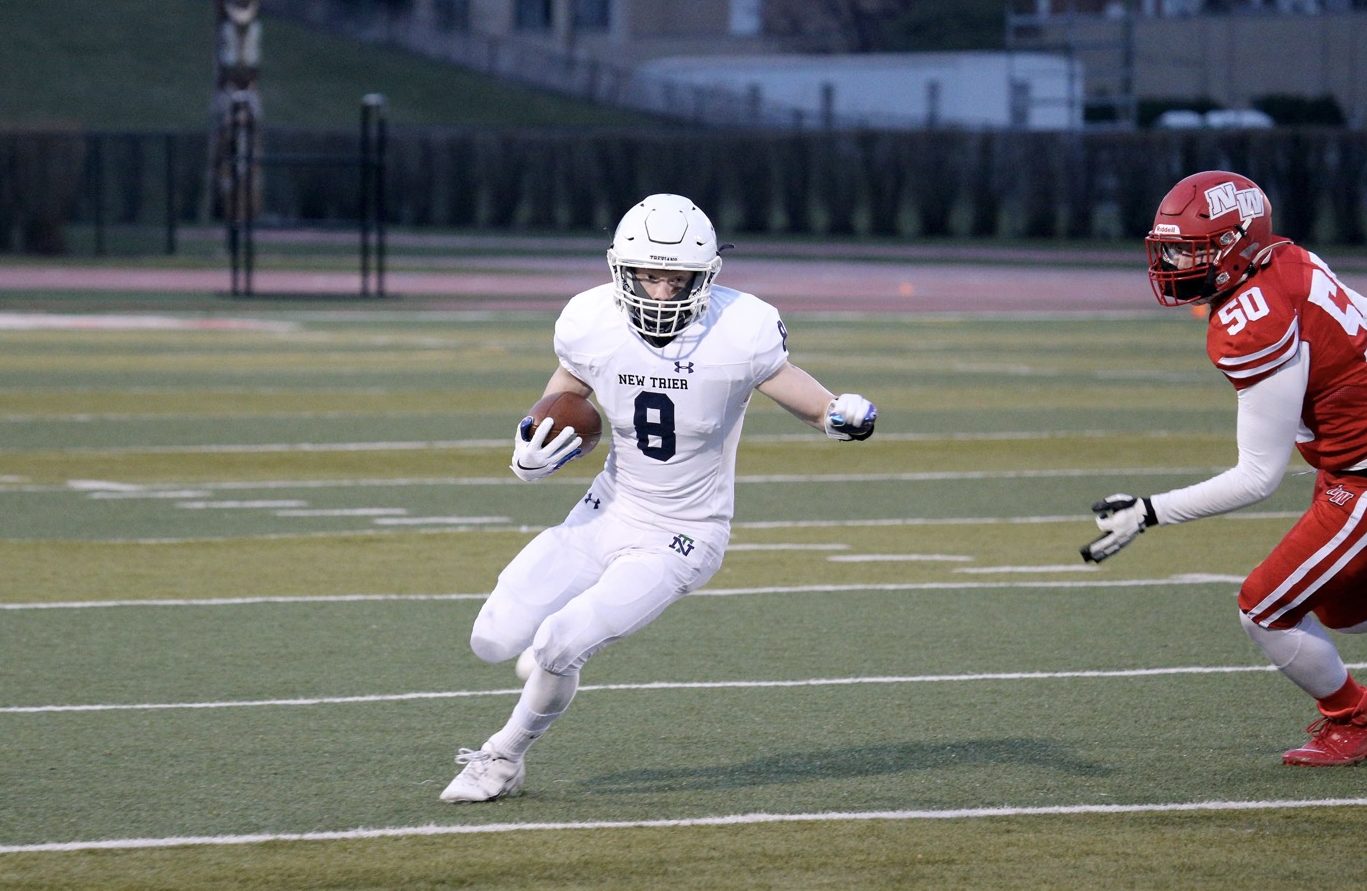 Brian Doll and the New Trier football team expected to start the season in strong fashion. But the Trevians’ production through the first two games of their campaign is exceeding any preseason notions.

The Trevians opened the game with six consecutive scoring drives and held the Wolves offense without a first down in the first half.

Through two games, New Trier is averaging more than 38 points per game on offense, while surrendering just seven total points.

“Tonight, to have a 49-0 win, and really just control the game completely was really nice,” Doll said, adding it’s been a dream start for the Trevians. “Last week was an emotional win for us, so you want to make sure you come out clean today. I think that is what I’m most proud of today.”

“It was very nice to have a lot of contributors tonight,” Doll said.

How it happened: A recap of game action

The Trevians again opened the game with a strong start as they put forward a 62-yard touchdown drive on their first possession.

Junior Nevan Cremascoli capped the drive with a 12-yard touchdown run on a quarterback keeper. The score was Cremascoli’s third rushing touchdown of the young campaign.

After forcing a Niles West three-and-out, New Trier built on its lead with a five-play scoring drive that was capped off by a 20-yard touchdown run from senior Brody Roth.

Roth continued his strong night on New Trier’s next drive when he scored a 51-yard rushing touchdown, giving the Trevians a 21-0 first quarter lead.

On the Trevians’ fourth drive of the night, Chase Avery rushed in a 6-yard touchdown, opening up New Trier’s lead to 28-0.

Avery was all over the field for the Trevians, as he scored two rushing touchdowns and recovered a Niles West fumble.

“We had a really great week of practice and that definitely helped us come out (strong) tonight,” Avery said. “We really wanted to bring the energy right out of the get-go.”

Avery’s second touchdown came on a 39-yard run on second down that gave New Trier a 42-0 lead right before halftime.

“I had a great block by Jimmy Hoban, so all props go to my offensive linemen for sure and … that (block) really helped set up that run,” Avery said. I saw the hole and I just hit it.”

The senior running back made the most of his Week 2 opportunities, as he and Roth combined for more than 150 rushing yards and four touchdowns.

“Chase had a big night for us … he ran the ball hard and he was very physical in the way he did that,” Doll said. “He’s worked really hard in the offseason. Last year he was a JV player for us, this year he’s right behind Brody and he gives us a nice one-two punch at running back there.”

Junior Josh Kirkpatrick, via a 35-yard run, and senior Michael Kolanko, on a 71-yard run, also scored touchdowns for the Trevians.

The Trevians’ tallest test of the young season awaits them next week as they will take on longtime rival Evanston (1-1) at 2:30 p.m. Saturday, April 3, in Northfield.

“I think it’s a really good matchup,” Doll said. “I think it’s a physical team and I think they kind of mimic a lot of the things we do, so I think it’s going to be a pretty balanced game. It’ll be fun.”

The Wildkits traded blows with perennial conference powerhouse Maine South in Week 2, ultimately dropping the CSL game by a final score of 10-7.

But the talented Evanston squad will present a challenge for the Trevians, and the Week 3 game could play a significant factor in deciding the CSL South champion this season.

“I think the easy part is they’re going to be up — they love the Evanston rivalry and it’s not going to be hard to motivate (our guys) to play that game,” Doll said. “We just have to get focused and break down some film, see what they’re doing well and find ways to stop it. We have our work cut out for us. We know they are going to be a really strong, physical team.”

The Trevs will need to gameplan for one of the best players in the state, Evanston junior Sebastian Cheeks, who already has multiple Power Five offers. Slowing down Cheeks, a two-way player who plays running back and linebacker, will be a top priority.