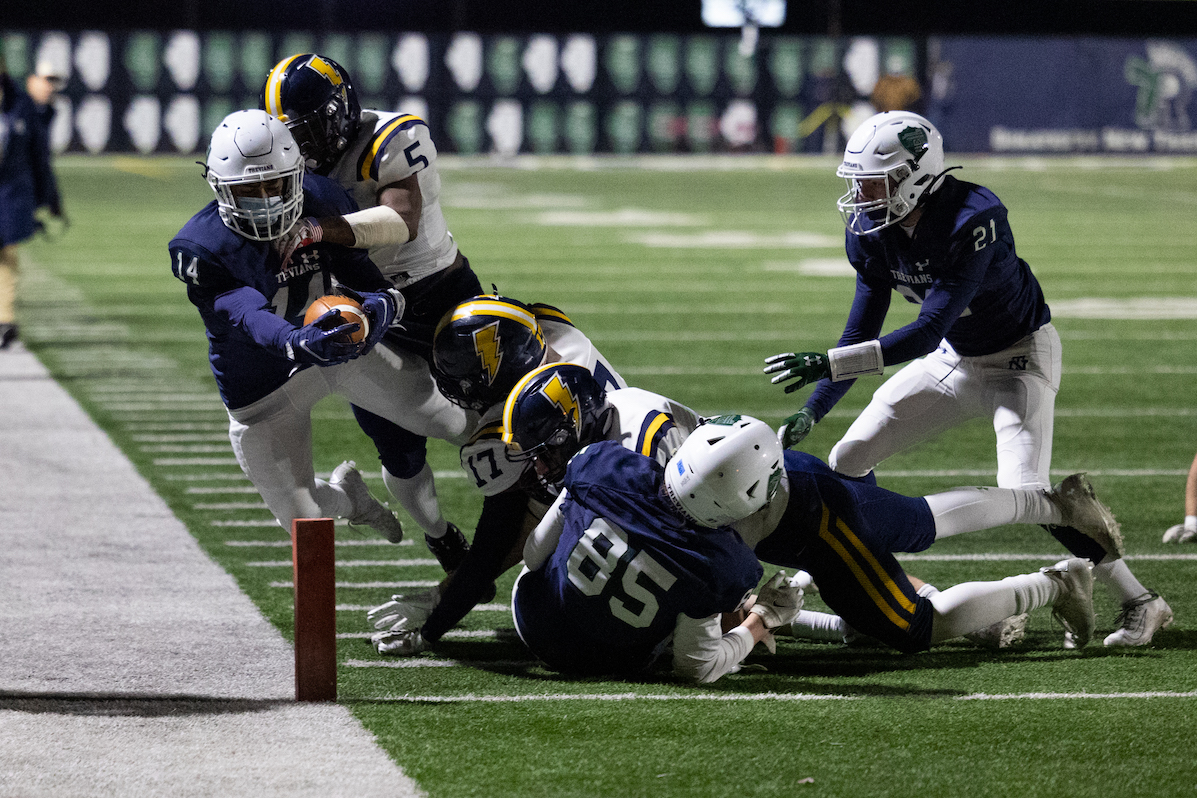 Brody Roth hasn’t played in a high school football game for more than 18 months, but the New Trier senior captain felt right at home the moment his team’s season kicked off.

Roth helped guide the Trevians on both sides of the ball during their well-rounded 28-7 victory over the visiting Glenbrook South Titans on Friday, March 19, in Northfield.

“The second the first ball was snapped, I knew exactly where I was,” Roth said. “It just felt great.”

On offense, Roth instantly ignited New Trier, opening the game with three consecutive rushes that totaled 60 yards for the Trevians.

“(Those runs) were a huge confidence booster,” said Roth, who finished the game with more than 100 yards on the ground and a rushing touchdown. “Our line really stepped up. We had a lot of really young guys that really filled our positions well and I’m really confident in our line.”

One of just a few Trevians playing on both sides of the ball, Roth also made his presence felt on defense.

Contributing in multiple facets of the game is something Roth finds great importance in.

“I take a lot of pride in that,” Roth said. “There’s only a select few guys that … our coaches let do it for us, and those handful of guys are really the captains. To be able to be on both sides and make an impact. it’s a great feeling.”

“I knew (our defense) was fast and I think we showed our speed tonight,” New Trier coach Brian Doll said. “They’re a bigger line, they’re a big, physical line — but our speed was really able to run down anything that would be close to breaking out, and I thought that was really the difference.”

The Trevians’ offense made the Titans pay for their miscues, as New Trier turned two of South’s second-half turnovers into 14 points.

Opening night is always a special occasion during any season, but the 2021 edition took on an even deeper meaning for the Trevians.

Football players, coaches and fans alike feared this season wouldn’t happen after it was delayed in the fall of last year to the spring of 2021 because of the COVID-19 pandemic.

Although it’s tough to top the feeling of beating a conference rival at home, the program felt a sense of victory even before the game started.

“It was awesome to be back out here and I think what I love most about it is just seeing the smiles on these guys faces,” Doll said. “You look at the seniors, specifically, and they’re just so happy to be here and so we really wanted to celebrate that tonight. The fact that we’re just playing football is a victory but then to be that dominant in your first game, after 18 months of not playing, was pretty special.”

How it happened: A recap of game action

The Titans responded with a defensive highlight of their own, intercepting a pass shortly thereafter.

The Trevs scored again midway through the second quarter when Cremascoli fired a 37-yard touchdown pass to junior Alex Mendes, and senior Tyler Hardin converted a two-point attempt to give the Trevs a 14-0 lead.

Both New Trier and Glenbrook South each picked off another pass before halftime.

The Titans’ turned the turnover into one of their best scoring opportunities of the game. But South was unable to convert on a fourth-and-goal chance from the 3-yard line on the last play of the half.

“I got the ball, my eyes were up, I read my guards and it looked like it was going outside and then it was just a couple one on ones and I made some guys miss,” Roth said.

An interception by New Trier’s Sam Harvey gave the Trevians the ball back quickly.

Cremascoli finished off the drive with a 1-yard quarterback keeper for a touchdown, putting the Trevs ahead 28-0 with just over four minutes left in the third quarter.

The quarterback finished the night with three scores (two rushing touchdowns, one passing).

Glenbrook South added a late score in the fourth quarter on a rushing touchdown to trim the margin to 28-7.

The Trevians will return to action next Friday, March 26, with a road game against Niles West High School (0-1).

“The main thing for us going into Niles West is about being better next week,” Doll said. “We have to really look at this film since we haven’t played in so long and look at what we didn’t do well and what we did do well and just grow.

“With a short season like this, you have to grow fast so we have to analyze it hard. (Glenbrook South) is one of the best teams we believe we’ll play in the six games and we’re going to look at it and say here’s where we were poor and here’s where we were strong. And the good news is we were a lot stronger than we were in bad situations tonight.”