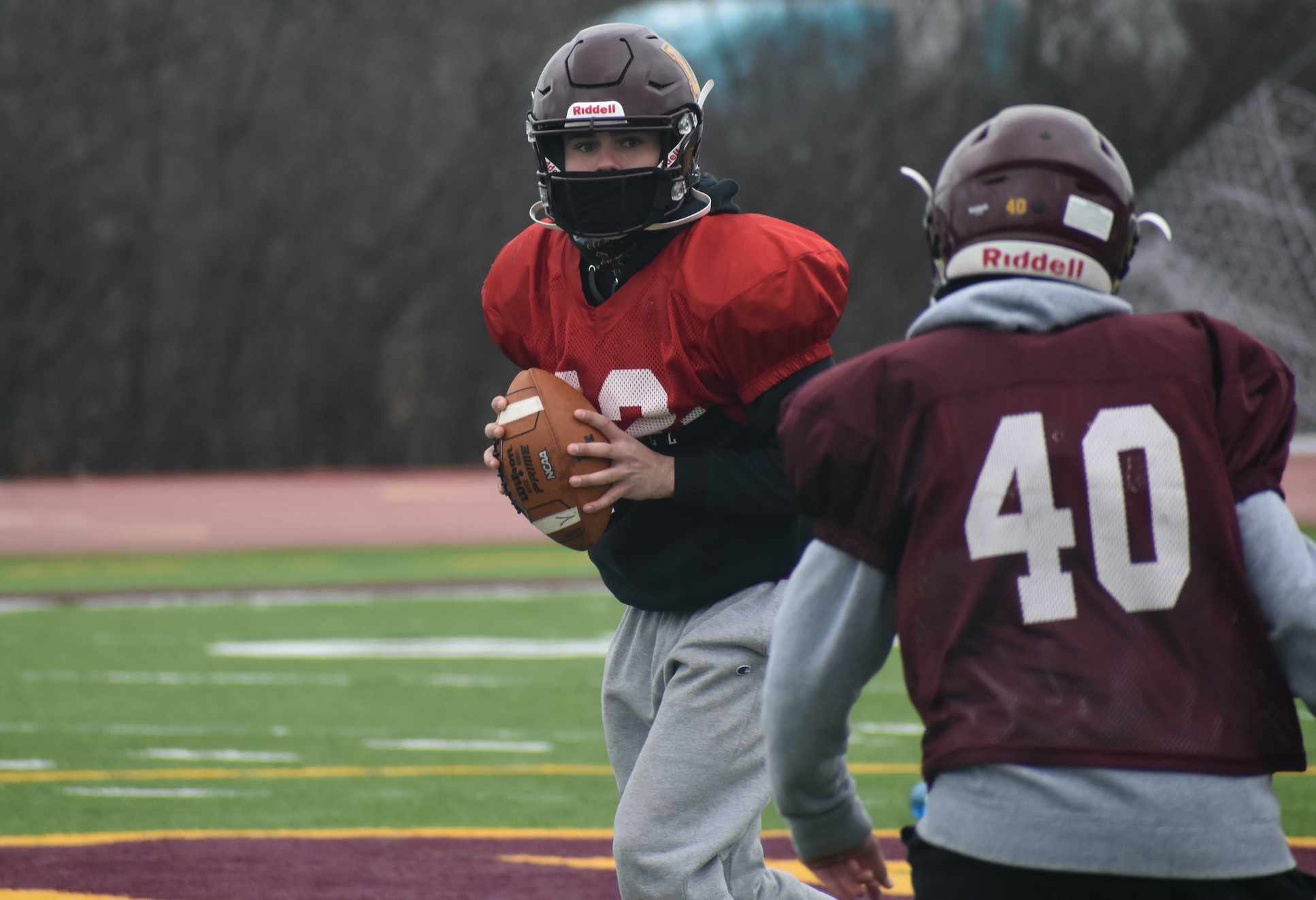 But it may surprise those outside the powerhouse program that the Ramblers feature more than a dozen returning starters from 2019 and a roster loaded with collegiate talent that head coach John Holecek believes rivals some of its state-championship predecessors.

The Ramblers will begin their abbreviated six-game campaign, a season that was shortened and moved to the spring because of the COVID-19 pandemic, on Friday, March 19, more than 16 months after their last game action.

The extended offseason was a challenge for programs around the state, including Loyola, but the Ramblers did reap some benefits from it.

It won’t quite be a regular high school football season — and it will undoubtedly look different than years prior — but Holecek and the coaching staff are thrilled to see players get the chance to compete.

“The senior class is very talented and I think missing their football season was going to be very detrimental to their mental health and their experience from high school, which should (involve) playing your senior year and feeling like you put it all out there,” Holecek said, “and you never look back at it with regret. It would have been awful to lose that, especially with this class.

“For the coaches, we’re so happy that we can go out and compete and do the things that we love to do. But we’re really concentrating on the seniors and the football players that really love this game. And the game gives them a lot and they take a lot from the game: teamwork, perseverance, discipline, accountability for each other. All those lessons we see daily and weekly and we’re just very happy that it’s back.”

Loyola will welcome back several key 2019 contributors on the offensive side of the ball.

Thomas will look to build off his 2019 campaign, when he threw for more than 1,300 yards and tossed 15 touchdown passes for the Ramblers.

A Glenview native and Denison University commit, Thomas saw the lion’s share of time under center for the 2019 unit that averaged nearly 30 points per game.

Sophomore Jake Stearney is also an option at quarterback, Holecek said, adding that quarterback is a “deep and talented position” for the Ramblers this year.

The Ramblers will also look to Marco Maldanado and Patrick Reilly in the backfield, Holecek said. Maldanado finished the 2019 season second on the team in rushing yards with 362 yards.

At wide receiver, Loyola is replacing Matthew Mangan, who led the team in both receptions (38) and receiving yards (565) in 2019, and Holecek expects senior Perrion McClinton to be a key contributor outside alongside senior Aidan Brownlee in the slot, who he described as a player who brings a lot of electricity.

Junior wideout Roger Simon is also expected to be a key target.

Loyola’s tight end James Kyle is a junior who already has multiple Division I scholarship offers. The Ramblers also expect junior Danny Collins to contribute at the position.

The team’s offensive line will be without one of its leaders, University of Illinois-commit Josh Kreutz, who suffered a knee injury in the offseason. But despite the loss of Kreutz, Loyola’s front five is still loaded with collegiate talent.

The Ramblers’ success is often built on the back of elite defenses.

The team’s 2019 unit held opponents to just 14 points per game — but Holecek anticipates this year’s group is one of the most potent he’s coached, starting with the front seven.

“Our front seven is pretty amazing,” he said.

Loyola’s interior defensive line will feature junior Mike Williams, who Holecek described as “an unbelievable nose guard as a sophomore who’s getting better.”

Seniors Omaru Konneh and Harvard-commit Brandon Svets will rush the edges for the Ramblers.

Outside linebackers Braden Mullen and Liam Conaghan are both college commits at Dartmouth and Eastern Illinois, respectively. They will be joined on the linebacking corps by inside linebackers Dan Naselli, a captain, and Jason Kusibab, who is committed to Rhodes College.

Holecek called safety “one of the defenses strong points” as the Ramblers will lean on Marty Auer and James Kreutz.

Returning starter Artist Benjamin, Danny Darrigo and Will Maheras are expected to lead the cornerback position.

Senior Nate Van Zelst is back for the Ramblers at both the kicker and punter positions. The Wisconsin commit is looking to build on an already accomplished Loyola career.

“Nate will probably go down as the best kicker in Loyola history,” Holecek said. “A guy that is being recruited by Big 10 schools doesn’t come around often. We’re looking forward to a big year for Nate.”

Brownlee was a big part of the Ramblers punt and kick returns in 2019 and the senior is expected to play a key role again this year.

Loyola commences its 2021 season with a Week 1 road matchup against St. Rita High School in Chicago. The Mustangs will be the first Catholic League foe the Ramblers will face this season.

In an abnormal season, preparation for Friday’s matchup is one aspect that is just like any other year.

“It’s just like usual, we’re dissecting what St. Rita does best,” said Holecek, who prefaced that by saying the team must “stay the course and stay healthy, keeping COVID problems away” so they can play.

The Ramblers will need to prepare for the Mustangs star junior wide receiver Kaleb Brown, who already has offers from multiple power five schools including Michigan, Ohio State and Alabama.

“We have our work cut out for us,” Holecek said. “They have other scholarships players. The speed is going to be there and they are going to have some dynamic playmakers. But as a team, we feel like if we play our game and rely on each other and know where we are, I think we can beat anyone. But of course, if we don’t play well, we could lose to anyone on our schedule because we play four out of the top five-15 ranked teams in the state for sure.”

After Week 1, the Ramblers are in for a showdown with rival Mount Carmel who bested them in early 2019. Matchups with Brother Rice (Week 3), Benet (Week 4) and Marist (Week 6) follow.

Loyola is still in search of a Week 5 opponent as of publication time. Holecek said they are actively looking and even considering a matchup against a Wisconsin team, if the state were to allow it.

With no state playoffs or title to chase, the Ramblers goals this season are simple: improve each day and finish the year playing the best football possible.

“(We hope) to get better every practice, get better every day and play the best game at the end of the year and win every game that you play,” Holecek said. “Take one game at a time and try to win it. From there … at the end of it, give it your all and look back with no regrets and have a bunch of great experiences.”

The Record is a nonprofit, reader-funded news site. Our public-service journalism, including some sports coverage, is free for all to read.