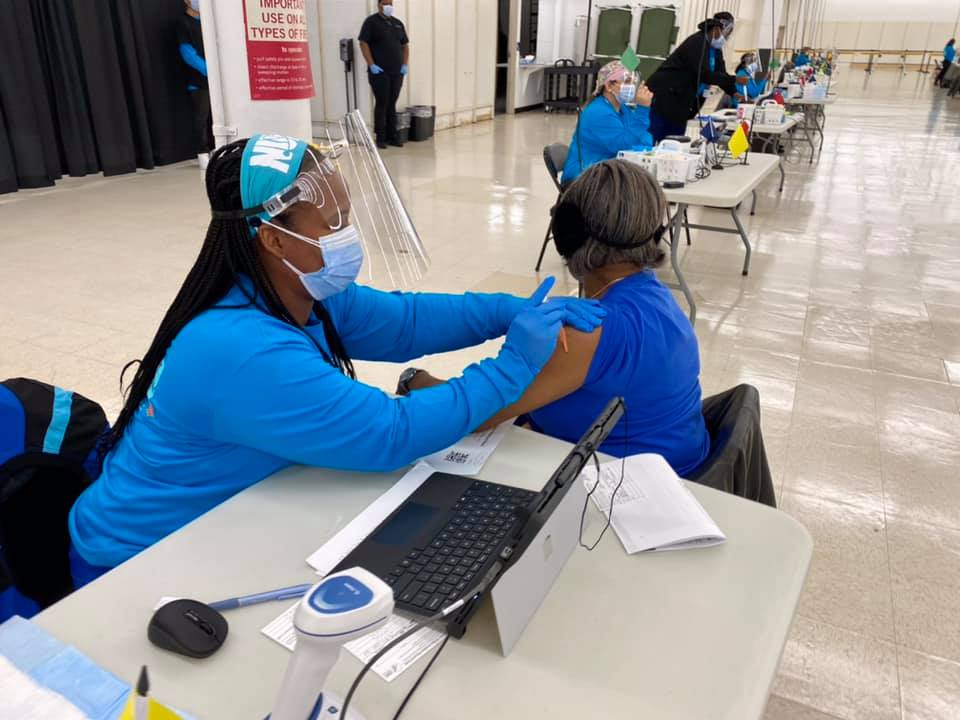 A county resident gets a vaccine shot at the mass vaccination site in Des Plaines. | Photo from Cook County

Residents of suburban Cook County with specified “high-risk conditions” will soon be eligible to receive the COVID-19 vaccine as the state continues to ramp up its vaccination efforts.

Phase 1b+ of the state’s vaccination program will begin Monday, March 22, in suburban Cook County, according to a press release from the county’s department of public health.

This phase includes individuals 16 years and older with any one of the following conditions:

According to Cook County data, so far more than 68 percent of individuals 65 and older in suburban Cook County have received at least one dose of a COVID-19 vaccine.

As of publication time, the county has administered 828,078 vaccine doses. Of that total, 316,902 residents are fully vaccinated, equaling roughly 12.8 percent of the county’s 2.4 million population.

The state is currently averaging a seven-day rolling average of 102,223 daily vaccinations, up from 98,166 a week ago.

All vaccine providers in suburban Cook County will be instructed by the county to also expand into the 1b+ phase, the release says.

The Des Plaines vaccination site, which is located at 1155 E. Oakton St., opened earlier this month. The site is administering the Johnson & Johnson vaccine.

Vaccinations at the site are done by appointment only, which can be made through vaccine.cookcountyil.gov or by calling the hotline at (833) 308-1988 from 7 a.m. to 7 p.m., Monday – Friday.

Previously, the state-supported sites were only administering vaccine doses earmarked for Cook County, the release says. Next week, the sites will receive additional doses allowing them to serve Illinois residents eligible under the previous phases.

Illinois residents who meet the current vaccination eligibility requirements can sign up at vaccine.cookcountyil.gov. The county plans on releasing new appointments at noon on Friday, March 19, the release says.

Officials did not directly state a time when appointments on Monday will open to those eligible in Phase 1b+.

Although Chicago has announced plans to move to Phase 1c — which includes more professions labeled “essential,” such as hair dressers, media professionals and more — in the state’s vaccination program as soon as March 29, Cook County officials have yet to release plans for the advancement in the suburbs.