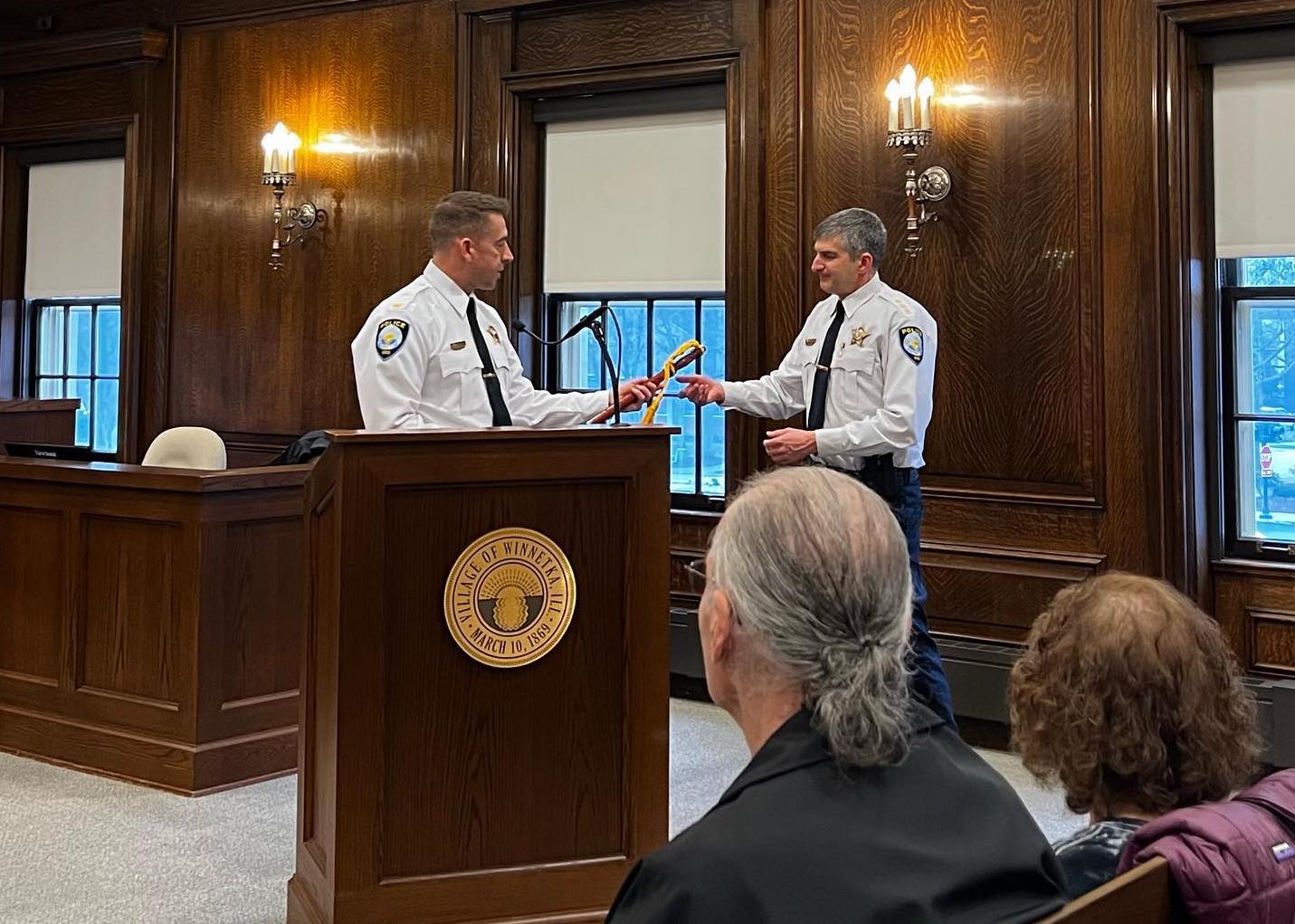 After 30 years of service to the village, Winnetka’s Police Chief Marc Hornstein retired on Jan. 5.

Hornstein’s seasoned career began when he was just 19 years old as a community service officer in Buffalo Grove, an experience which assured him that law enforcement was the right path for him.

“I liked that there was a variety, something kind of different every day. When you’d answer phone, a different inquiry,” he said.

In addition, he found himself motivated by “the opportunity to serve and truly to help people.”

In 1993, after earning his bachelor’s degree in criminal justice from Northeastern Illinois University, Hornstein accepted a job as a police officer for the Village of Winnetka.

“I could have landed anywhere,” he said. “For me to have ended up landing in Winnetka was really special. I was fortunate for that.”

Over his career, Hornstein filled many roles in the department, working as a drug abuse resistance education officer and spending a lot of his earlier years in schools before being promoted to chief in June 2017. But what he says he valued most at every stage are the relationships he forged with Winnetkans and colleagues.

He enjoyed seeing some of the students he worked with growing up in the village, going on to have success in life before getting married, having kids and coming back to the village. One of his former DARE students at Sacred Heart School, Victoria Taylor, even grew up to become a police officer in his department.

“That’s what you get when you stay in one place for such a long time and invest in people, and put value in relationships,” he remarked.

That spirit of investing in people was echoed by Hornstein’s former colleague and the current Interim Police Chief Brian O’Connell, who said that Hornstein’s prioritization of relationships “is what he’ll be most known for.”

O’Connell went on to say Hornstein’s focus on positive connections manifested in both a productive workplace and a good rapport with the community.

“People were willing to work and willing to give their best effort every day, knowing that there was support from him,” O’Connel said. “You couldn’t go into a coffee shop in town without him having a conversation with someone he knew, or someone who came up with him wanting to have a brief discussion. He was always willing to have those.”

While Hornstein’s value of relationships was largely consistent over his career, he still witnessed many changes over his 30 years — first and foremost, the advancements in technology.

When he started with Winnetka in 1993, the department didn’t even have email yet. But now, all calls are received and assigned to officers via a computer-based system, and officers have in-car computers and give paperless crash reports and citations.

Crime itself has changed as well; two prevalent crimes today, identity theft and phishing scams, were virtually nonexistent in the preinternet era. All of these changes have drastically changed law enforcement, shifting the training that officers and detectives receive and forcing the departments to frequently update their practices to keep up.

As Hornstein looks back over this tenure as chief, he has a few accomplishments he likes to think of.

“No doubt we strengthened our relationship with our area schools. We were able to get our first ever reciprocal reporting agreement with District 36,” he said, an arrangement that allows for the police department and schools to share limited types of information as it concerns public safety.

He also helped create a business liaison officer, a specific officer who local businesses could call with policing needs particular to their work.

Hornstein oversaw the department during the tumultuous first years of the COVID-19 pandemic and ongoing civil unrest, and took that opportunity to renew the department’s commitment to professional policing. He worked with the village to adopt the Ten Shared Principles developed by the Illinois NAACP chapter and the Illinois Association of Chiefs of Police, which he calls a set of common beliefs on how people should be treated and shown respect. The Ten Shared Principles are on display under glass in the lobby of the Winnetka Police Department.

“He did a really nice job of navigating our way through that to have that balance, to continue to serve and protect yet appreciate the individual feelings that came along with the pandemic,” O’Connell said of Hornstein’s leadership during the challenging time, adding “he kept communication open and continuous, he did not shy away from having those conversations with us and the community.”

At his retirement reception earlier this month, Hornstein surprised himself with how emotional he felt about the transition.

“It reminds me how fast time goes,” he said. “It seems like just yesterday I just started my career, and here we are 30 years later and it’s done. It’s bittersweet. It’s really hard to walk away, but I know the time is right and I’m certainly proud of what we’ve been able to accomplish and certainly grateful for all of the talented and amazing people I’ve had an opportunity to work with.”

Still, Hornstein is looking forward to the next chapter and the chance to unplug after working in a career that almost never let him turn off or disengage.

While not sure what his future plans are, for now Hornstein said he will “find some other interests and things that I can do to continue to serve and help others. I do play the drums and will spend a little time getting into that.”

While Hornstein is still determining his next steps, one thing he feels confident about is the state of Winnetka’s police department.

“The organization has done a great job over a long period of time of succession planning and developing leaders over the years to continue to carry the torch,” he said. “They’ll continue to provide the highest level of police service to the community.”