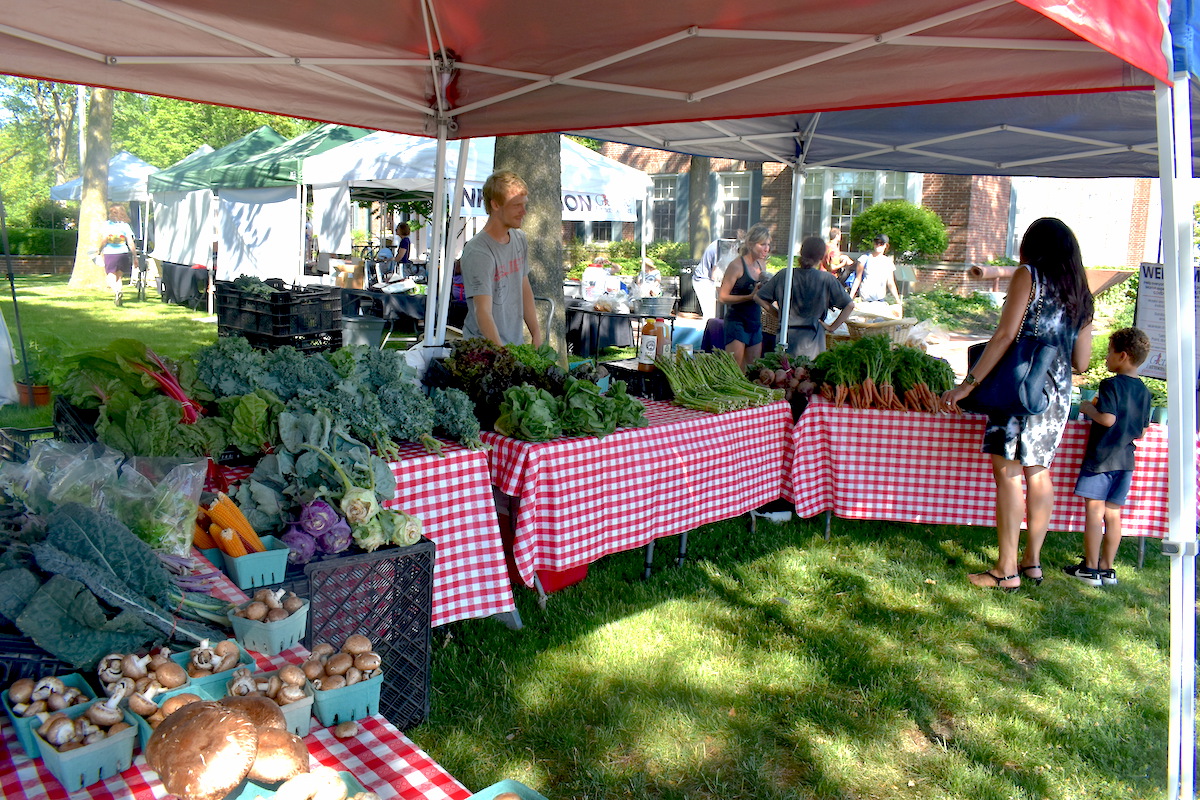 A produce stand at the Glencoe Farmers Market in 2021, when it was held at Wyman Court.

After multiple seasons of low attendance, challenges with vendor retention and changes in management, the Glencoe Farmers Market may be done for.

The state of the farmers market was one of the discussion topics at the Glencoe Village Board’s
committee of the whole meeting on Thursday, Jan. 19.

The recommendation to end the farmers market followed a sparsely attended 2022 season managed
by Taste Marketing, which informed Glencoe staff that it “no longer wished” to handle the event, said Sammy Hanzel, Glencoe’s communications manager. She said they have been managing the market since 2017.

Hanzel said Taste Marketing cited an over-saturation of markets in the area, including larger markets in Winnetka, Highland Park, Deerfield and Evanston; a decline in vendors participating in the market; and “a lot of foot traffic at the market but not a lot of buyers.”

Village Manager Phil Kiraly told trustees that the challenges the village has faced with the farmers market
aren’t new.

“I think, quite frankly, the struggle we have had is establishing the right day, the right time,” he said. “We’ve changed it several times.”

This past season, the market moved to the village green from Wyman Court, where it had been held for
six years, and changed to Thursday afternoons after previously being held on Saturday.

“Wyman Green was great, but we never had much foot traffic, or we’d start the season with great foot
traffic and by July, it slowed to a trickle,” he said.

Hanzel wrote in her memo that it didn’t make a noticeable difference.

This past season, Kiraly said they started with 15 vendors, but he believes that number was not maintained throughout the rest of the summer.

“It’s a chicken or the egg. Do you have the right vendors?” he said. “Well, you need people to attend, so
the right vendors continue to come back. And that has been a challenge.”

“And it may be more beneficial, both financially and staff-wise, to consider refocusing our efforts on
building new events or adding to existing events,” she said.

Additionally, staff is not recommending continuing the market without the help of a third party, because
Hanzel said “managing a market is difficult” without one.

According to Hanzel’s memo, prior to Taste Marketing, the market was managed by the Glencoe Chamber of Commerce, which has since been absorbed into the Winnetka-Northfield Chamber of Commerce. The exception was the 2015 season, where it was operated as a French market by Bensidoun, USA. Following that season, Hanzel wrote that they parted ways with the chamber, and the
market was not held during the 2016 season.

Kiraly said the village is considering asking the vendors who did have a successful season at the market to return in some capacity, possibly with the Glencoe Park District’s summer concert series, the sidewalk
sale in June and with the village’s annual art festival.

He noted that the vendors that seemed to be the most successful were ones that sold products, such as cut flowers and prepackaged alcoholic beverages, and not those selling produce.

“But a weekly market has just struggled in Glencoe,” Kiraly said. “And while there are people who, I
think, were regulars and showed up on a regular basis, the critical mass was just not there.”

Village President Howard Roin agreed that it might be time to move on from the farmers market. He
wondered if the residents would be upset about it, given how much market attendance has lagged.

“Maybe we just have to let it go,” he said. “Think about having a question on our surveys.”

His comment was in reference to the village’s community survey, which is expected to be sent out to
Glencoe residents next month.

The survey was also discussed at the committee of the whole meeting, with Hanzel highlighting some of
what the village will be asking about.

While questions are still being finalized, village staff is recommending residents’ responses are gathered
on a number of areas the village is interested in gauging community satisfaction on. These include quality of life, community services (including village government), the look and feel of the village, village
communications and the Glencoe Golf Club.

Previous community surveys were sent out in 2015 and 2019, which received an 18 and 19 percent
response rate from the community, respectively.

Kiraly called that number “magnificently high” and is hopeful the village receives that type of response
this year too.

Trustees are expected to approve the survey at the next Village Board meeting, and it will be sent out in
February, with responses due by March. Residents will have the option of filling out a physical survey or visiting a website.

The results are expected to be presented to the village board in April.

Following the committee of the whole meeting, trustees held their regular board meeting, where they unanimously approved a new ordinance that allows for outdoor dining.