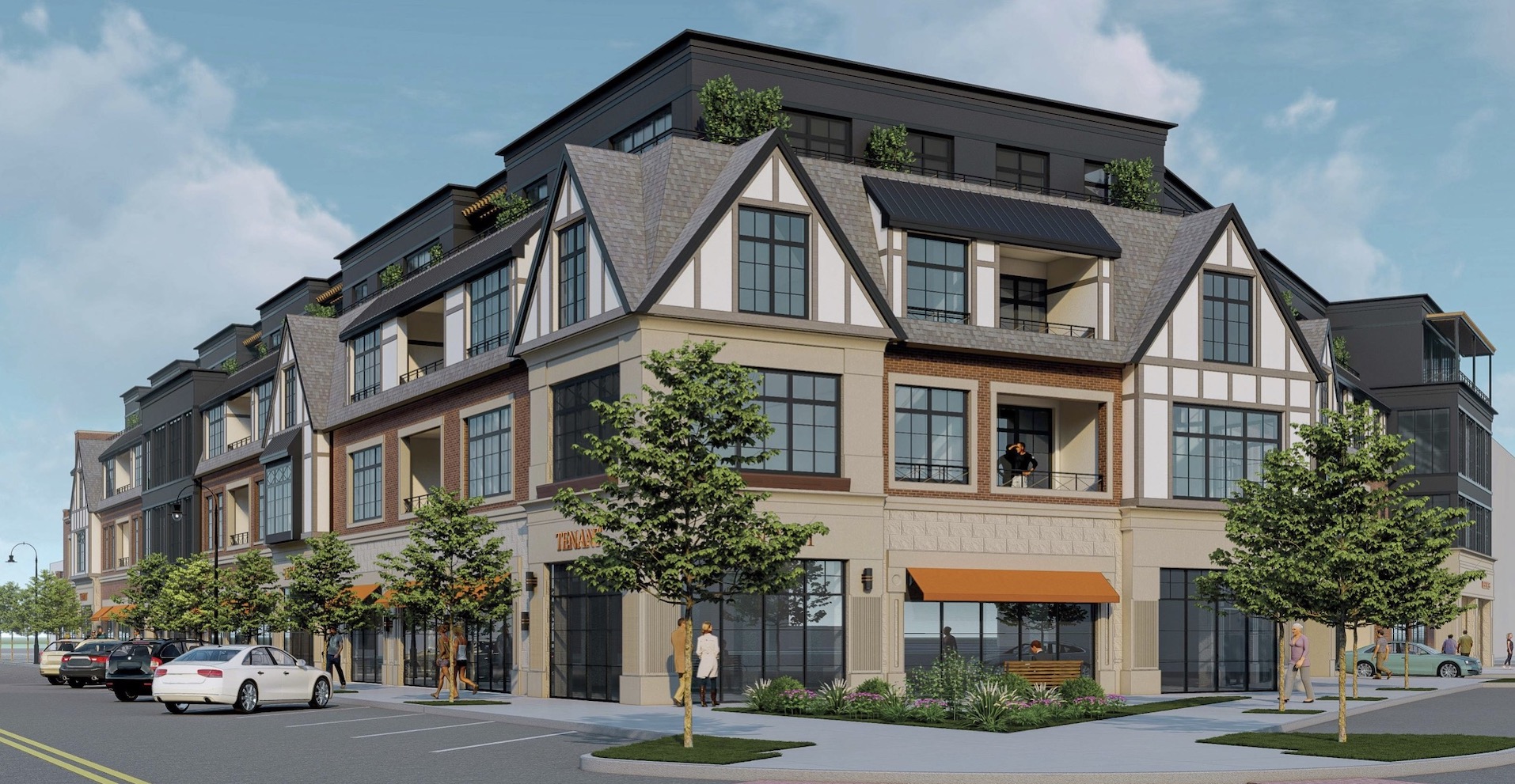 The newest One Winnetka designs now have a contiguous facade along Lincoln Avenue. | Images from OKW Architects

One Winnetka continued down its path to redemption Tuesday, when its newest designs impressed Winnetka trustees.

The project’s developers returned to the Village Council Jan. 17 with refreshed plans following the acquisition (under contract) of the Conney’s Pharmacy building, 736 Elm St. With Conney’s, the four-story multi-use development now has an interrupted footprint at the southeast corner of Lincoln Avenue and Elm Street.

“Conney’s is part of the deal, which I think fundamentally makes this a much better, much cleaner and ultimately a much more successful real estate development for the applicant, the architect and the village,” said Jon Talty, chairman of OKW Architects, One Winnetka’s designer.

Winnetka’s trustees generally agreed, as they provided feedback as part of the first step of the village’s design review process. Next up for One Winnetka is a preliminary plan review from the design review board, which will make a recommendation for the plan’s final council consideration.

Members of the Village Council took turns Tuesday praising One Winnetka’s designs and thanking developers for listening to previous concerns of village officials as well as residents.

“I think it’s a really nice design and the context fits well with the location,” Trustee Bob Dearborn said.

Among the latest changes in One Winnetka’s plans is a 23 percent increase, from 48 to 59, in residential units. Talty explained this was possible not only because of the added square footage provided by the Conney’s acquisition but also because designers decreased the average size of a unit to 1,426 square feet (range: 1,100 to 2,000-plus).

Another major change, and one celebrated by the council, was moving vehicular access to the property to Lincoln Avenue. The main residential entryway will also be off Lincoln. The site includes 38 public parking spaces set within the building’s footprint and another lot of parking underground.

With the inclusion of the Conney’s footprint, One Winnetka now has a long elevation along Lincoln Avenue — a stretch that is challenging, Talty said, as designers attempt to avoid a bland perspective. To make it interesting, Talty and company said they plan to vary color and material on the building’s facade and add recesses and dormers to the residential units.

“We want to be sensitive to the length along Elm Street; it’s darn near 200 feet long,” he said. “Given that, we are careful how we break that down architecturally. We don’t want it to be a one-liner.”

Prior to the council meeting, Talty and other One Winnetka project leaders met with the site’s neighbors at 711 Oak Street.

Representing the 711 Oak’s residents, John Phelan and Frank Petrek each spoke at Tuesday’s meeting to express their gratitude for the project’s recent progress.

“We had a very positive talk with John (Talty). I appreciate that quite a bit,” Petrek said. “As someone who has been … paying attention to construction in Winnetka for the better part of four decades, I think this looks really good. I mean that sincerely.”

Phelan echoed Petrek’s thoughts and also requested the Village monitor and help regulate construction, specifically building demolition and the debris that will result.

The council’s preliminary review offered developers early thoughts and suggestions to inform their presentation to the design review board.

Multiple trustees shared a desire for One Winnetka developers to be more thoughtful about the corner of Lincoln and Elm, adding elements to make it more interesting and complementary to the rest of the district.

And while most of the trustees’ comments were favorable, Village President Chris Rintz questioned the project’s commercial plan, which calls for more than 20,000 square feet of total space, an increase of about 12 percent from previous designs.

“I’m just going to say it flat out: 20,000 (square) feet for this building is too much and and your spaces are too deep,” he said. “… Something to think about. You might net out a couple extra parking spaces and save yourself a lot of grief in the future.”