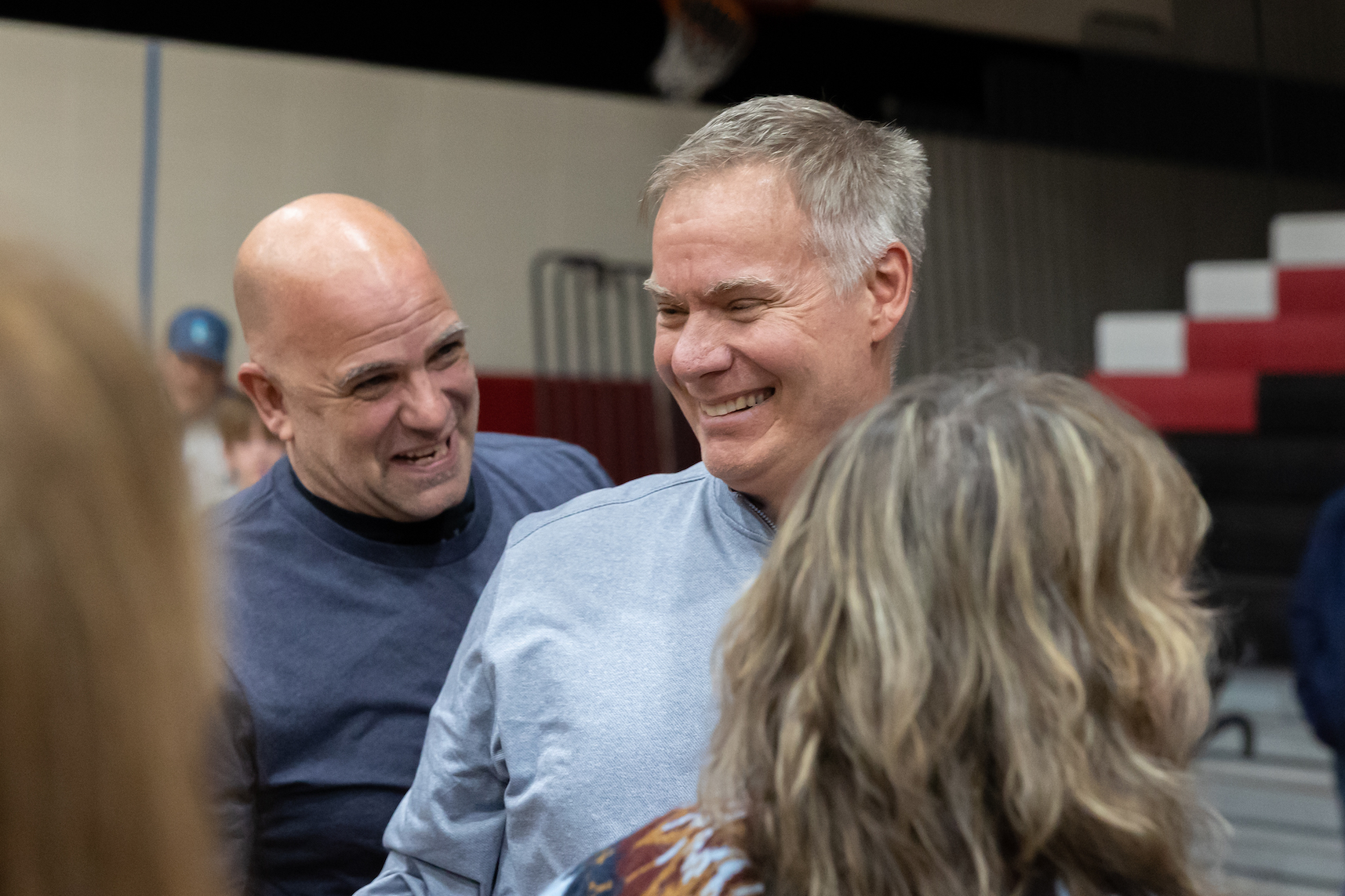 Scott Fricke (right) has a laugh with his brother, Bill, on Friday, Jan. 13, after collecting his 300th win as head coach of New Trier boys basketball. | Photos by Rob Lange/The Record North Shore

Coaching news out of the New Trier boys basketball program is rare.

The no news is good news if you ask head coach Scott Fricke, who is just the third program leader since New Trier reconsolidated in 1982.

“It’s a tribute to our program and our school,” Fricke said. “Longevity is important. It’s something that benefits the kids by having someone in that establishes the program.”

The latest testament to the program’s coaching loyalty and success was celebrated Friday, Jan. 13, when the Trevians’ 55-25 road win over Maine South gave Fricke his 300th victory.

Fricke is in his 15th season as head coach of the Trevians, and family, friends, colleagues and players were ready for the occasion, surprising Fricke after the win with everything from commemorative banners and T-shirts to locker-room and postgame parties.

“I had no idea what they were doing, what was happening, what was going on,” Fricke said. “… It was something that really surprised me. I had a ton of family and friends at the game but I didn’t know it because they were hiding from me. After the game, they all came down. It was special.”

As a senior at Northern Illinois University, Fricke got his first taste of high school coaching as an assistant with Sycamore High School near DeKalb. While teaching in the western suburbs, he also helped out with Nazareth’s program before coming to New Trier in 1995, coaching the Trevians lower levels in the final season for Illinois Hall of Fame coach Mel Sheets.

The next season Fricke helped head coach Rick Malnati’s first varsity unit. He coached there for 12 seasons and took over the program when Malnati resigned in 2008.

David Brenner, a 24-year New Trier assistant coach who helped select Fricke in 2008, said since that time Fricke has earned respect and admiration of area players, coaches and more while leading a winning program.

He said Fricke quickly sees things on a basketball court that most — including him — miss and can adjust in real-time. Combine the coaching acuity with a the respectful treatment of players and coaches and Fricke has earned his sterling reputation, Brenner said.

“My kids all played sports and I would have loved for them to have coaches like Scott (Fricke), who look out for their wellbeing at all times,” he said. “He’s teaching (his players) the game, teaching them to win. He doesn’t always have the greatest news for every kid, but he treats every kid with respect. He’s looking out for everyone, from the best players to kids who don’t play as much.”

The Trevians went 11-15 in Fricke’s first season (2008-’09) and have since compiled 14 straight winning campaigns that have included six regional championships and one of Fricke’s favorite memories: a sectional crown (elite eight) in 2012, when New Trier pushed a Jabari Parker-led Simeon squad to the final buzzer in supersectional play.

As Brenner predicted, Fricke deflected the praise. Fricke name-dropped every one on his coaching staff, which now includes Malnati, while also lauding his players over the years.

“If I could sum (the success) up in one word, it would be dedication,” Fricke said. “Our players are 100 percent bought in and dedicated to not only improving and getting themselves the best they can, but they’re dedicated to making themselves better so that the team is better.

“People who come to games and think, ‘There is a good player,’ don’t realize the amount of dedication, the amount of work that goes into what they see out there.”

And the success continues off New Trier’s court. Thirteen Trevians are currently playing college basketball, and Brenner said they and many other former Trevs are carrying with them things they learned under Fricke’s tutelage.

“Scott is always teaching these kids lessons that are going to help them in basketball, help them in college, help them in business and to be better husbands and fathers and friends to people,” Brenner said. “I’m really proud of what we’ve done to develop young men.”

Fricke said that’s New Trier basketball, and it’s something he took from Malnati who took it from Sheets who came up with it about 60 years ago.

And it has led to more than 1,000 wins in that time and will lead to more whenever Fricke hands over the reins.

“I love the fact that it was coach Sheets’ system and then Malnati’s system. I have parts of both their systems, but the main New Trier system since 1968 is pretty much the same,” Fricke said. “We tweak it. Obviously every year it’s different, but there are a lot of similar parts to back when Mel Sheets was coaching and I think that makes it special.”