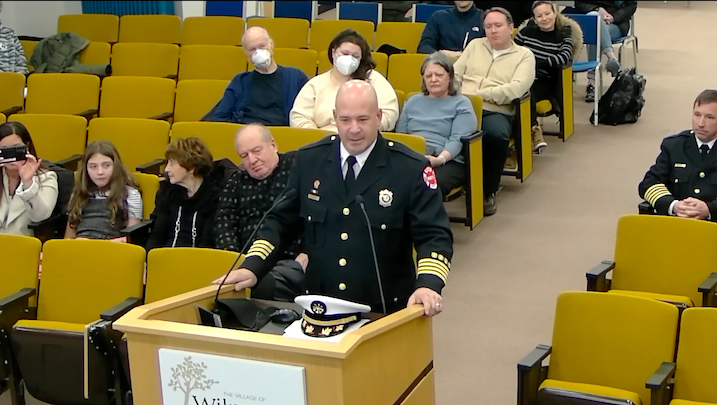 Firefighter Robert Brill speaks in front of the Wilmette Village Board on his final day with the department Tuesday, Jan. 10. | Image from Meeting Recording

The theme of the first meeting of 2023 for the Wilmette Village Board was seemingly new beginnings, as village trustees commemorated the contributions of departing community leaders and announced new officers in the fire department.

Fire Chief Brian Lambel stepped to the lectern Tuesday, Jan. 10, to honor Deputy Fire Chief Robert Brill, who is leaving the village after 23 years to serve as fire chief of the Wheaton Fire Department.

“Rob has been instrumental in our organization,” Lambel said before listing Brill’s accomplishments and adding, “Things we have accomplishments all have Rob’s signature on them. Things that grow in the future are from seeds Rob planted.”

He thanked the Village Board for their support and listed some of his most memorable moments with the department.

“I stand before you with tremendous pride in what we accomplished as a group,” Brill said. “The men and women — they aren’t all here tonight — and officers and firefighters behind me, I’m just so proud to be one of them.

The Village Board then read into record a measure commemorating Brill and presented him with a plaque.

Following the ceremonious activity, Lambel administered the Oath of Office to three Wilmette firefighters who achieved promotions in the wake of Brill’s departure.

Battalion Chief Ryan Menzies, who has served in the department for nearly 19 years, was appointed deputy fire chief. Lt. Michael Scheetz, a 12-year member of the department, moved up to battalion chief. And Dan Walters, who also joined the department 2010, will be promoted to lieutenant.

The Village Board also recognized Kathy Hussey-Arntson, who is retiring after 29 years as the director of Wilmette Historical Museum.

“When you think of the history of Wilmette, one of the first people to come to mind is Kathy,” Village President Senta Plunkett said.

In her nearly three decades of service Hussey-Arnston oversaw the relocation and expansion of the museum while maintaining its day to day operations. In addition to her duties as director, she wrote a book titled “Images of America: Wilmette” alongside Patrick Leary in 2012.

After her contributions to the village were recognized, Hussey-Arnston was presented with an official resolution and a gift.

Look for a profile of Hussey-Arnston and her contributions in The Record next week.