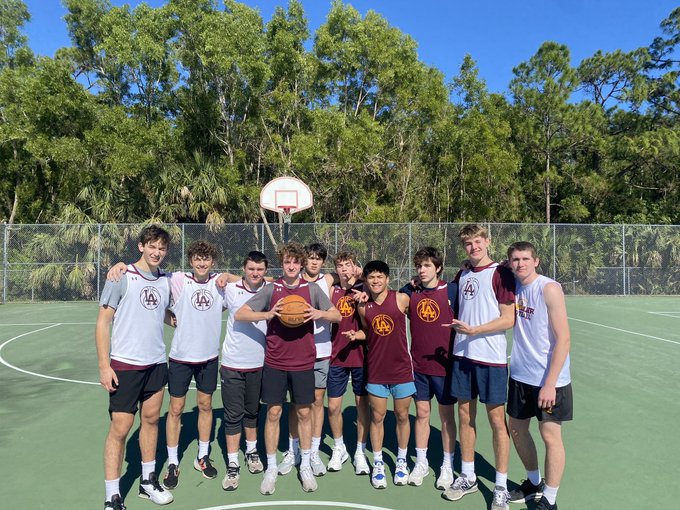 Ramblers finish up an outdoor practice during a roadtrip to Naples, Florida. | Photo Submitted

Jake Fiegen finished with 21 points and 10 rebounds as the Trevians dropped their second game of the Pontiac Holiday Tournament on Thursday, Dec. 29.

Ian Brown chipped in 9 points, while Logan Feller had 8 rebounds for New Trier (11-2).

Alex Engro scores 11 points and Brendan Loftus has 7 rebounds for the Ramblers on Thursday, Dec. 29, in a semifinal of the Kelleher Holiday Hoopsfest in Naples, Florida.

Simon Moschin scored 18 points and Sam Rohn added 12 for the Giants in the Jack Tosh Holiday Classic on Thursday, Dec. 29, at York High School in Elmhurst.

Jake Fiegen racked up 28 points on 8-of-11 shooting to key a Trevians’ win in the opening round of the Pontiac Holiday Tournament Wednesday, Dec. 28, in Pontiac.

Miles Boland explored for 36 points, including seven 3-pointers, for the victorious Ramblers (11-4) during the Kelleher Holiday Hoopfest Wednesday, Dec. 28, in Naples, Florida.

Gabe Shamberg and Sam Rohn led the way for the Giants with 12 points apiece on Wednesday, Dec. 28, in their third game of the Jack Tosh Holiday Classic hosted by York High School.

Miles Boland and Alex Engro led Loyola with 12 and 11 points, respectively, as the Ramblers earned a tournament-opening victory on Tuesday, Dec. 27, in Naples, Florida.

With the Thursday, Dec. 29 win, the Trevians finished 3-1 and as consolation champions in the Komaromy Classic at Dundee-Crown High School, and Rachael Zacks was named to the All-Tournament team.

Rachael Zacks scored 24 points to lead the way in the Trevians’ victory Wednesday, Dec. 28, in the Komaromy Classic at Dundee-Crown High School.

New Trier held the Warriors to 30 percent shooting on the afternoon.

Rachael Zacks had 15 points and Marley Meyers 8 for the Trevians in the 39th annual Komaromy Classic Tuesday, Dec. 27, at Dundee-Crown High School in Carpentersville.

The Panthers overcame a 17-point deficit to claim victory over the Wolves on Tuesday, Dec. 27, in Skokie.

Reese Lahey (14 points), KJ Sacarro (11) and Erin Floyd (10) all scored in double digits for the Trevs on Monday, Dec. 26, in their opening game of the Komaromy Classic at Dundee-Crown High School.

Sacarro added 7 assists, while Lahey and Floyd had 7 rebounds each.

Loyola Academy topped Allen High School — one of Texas’ top programs — 35-34 on a tiebreaker to highlight a trip from Dec. 21-22 to Gallagher-Iba Arena in Stillwater, Oklahoma.

Victoria Hughes had a high-game 210 as New Trier finished third out of 10 teams on Wednesday, Dec. 28.

The Ramblers finished in 12th place in the power-packed tournament.