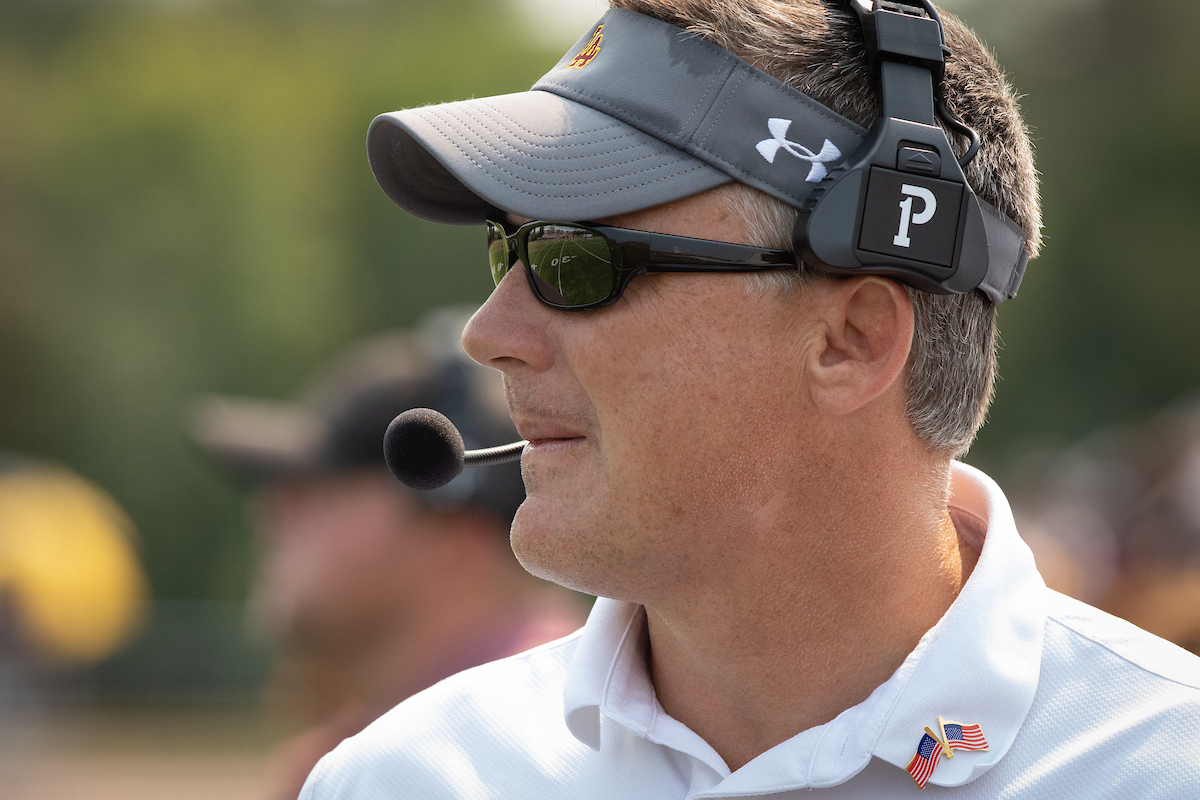 The resignation of 17-year Loyola Academy football coach John Holecek that broke on Dec. 6 drew as much shock as the Ramblers’ game-opening flea flicker in the state championship game not two weeks earlier.

But just like the touchdown-scoring trick play, it was planned and well thought out, he told The Record in an interview on Dec. 7.

“Genevieve (Atwood, Loyola vice president of athletics) and I talked last year and throughout this year. I thought this would be a good year for a long time,” Holecek said. ” … This was confirmed in October and I told the boss a long time ago.”

In reality, Holecek was setting up this moment for years.

Listen to the interview with coach Holecek by clicking below:

When news came out about the change, Holecek said a friend texted him a screenshot of a conversation from 2014 in which Holecek half-joked that he would a least coach until 2023, when his youngest son, Luke, a fourth-grader at the time, graduated Loyola Academy.

Holecek made similar comments to reporters in 2015-’16 when rumors swirled about his candidacy for a job with the football program at his alma mater, the University of Illinois.

A man of his word, though, Holecek is moving on as Luke is set to graduate in May.

“All chapters have to end,” he said. “I saw my 1-, 2- and 3-year-old grow up around the school and now graduate from the school. This is hard work, it’s demanding; it’s rewarding work, but at some point, you want a change.”

Holecek, 50, who lives in Glenview where he raised his three sons with his wife, Patricia, said he has no plans for what the change may be — no job interviews on the calendar, no voicemails with offers.

He said for 17 years he was all Rambler all the time, never truly entertaining other options. And while Holecek is open to college-football offers, if someone asks him for a resume, he’ll have to create one.

“This is where I was perfectly located for a long time. I never pursued anything. I am not that person,” Holecek said. “I am 100 percent in when I’m in. So when you’re 100 percent in and a perfectionist type, you have a tendency to do everything you can and use a lot of energy. So it’s a nice time for me to have a break from that.

“I’ve never pushed for a job. I never ever had a resume on anyone’s desk. I don’t even have a resume.”

No regret or uncertainty surround Holecek’s decision to leave Loyola Academy, but that doesn’t mean it is simple.

After an eight-year stretch of playing in the National Football League, Holecek built a successful second career as a high school football coach. A byproduct of his “all-in” mindset, leaving his second career is as disorienting as leaving his first.

“You always feel a bit lost. … I had a similar feeling when I was 30 and left the NFL,” Holecek said. “Your identity is what you do, how you spend your time and what you accomplish during the day, so until there is something there — and obviously I have to decompress some — there’s going to be some conflict.”

Not among his concerns is the future success of the Ramblers.

Holecek is confident in the program’s coaches, many of whom — such as offensive coordinator Tyler Vradenburg, lines coach Pete Distaulo, and assistants Pete Devine, Mike Herbert and Mike Kotowski among others — are longtime members of the staff.

He credited his fellow coaches, as well as the school’s administration and team’s players and parents, for the outrageous success of the program during his tenure — achievements that include 17 playoff appearances, 185 wins (10.9 wins per season), nine Chicago Catholic League crowns, seven state championship games and three state titles.

In fact, Holecek said he would not be leaving if he did not feel good about the present and future of the football program.

To Holecek, though, 14-win seasons and state championships are great, but the method to reach those results is greater. Amid what he called a “show-me” culture, Holecek said the Ramblers’ sportsmanship, humility and selflessness endured and are atop his list of proudest achievements.

“I think that’s a lost art in this world,” he said of sportsmanship. “Parents are getting more involved to the detriment of their kids … and I think our players played with great teamwork and selflessness. They got the message when I said be humble and be grateful and just get better every day. Nothing is given; you have to earn it.

“And I think making kids successful in football gives them a great direction in life. We turned every stone over trying to find ways to get better — weight-room-wise, nutrition-wise, film-wise — and we did it safely. We are one of the few teams I bet that never goes to the ground, ever, in practice. … I think doing things the right way and the selfless character of our team, that’s what I really loved.”