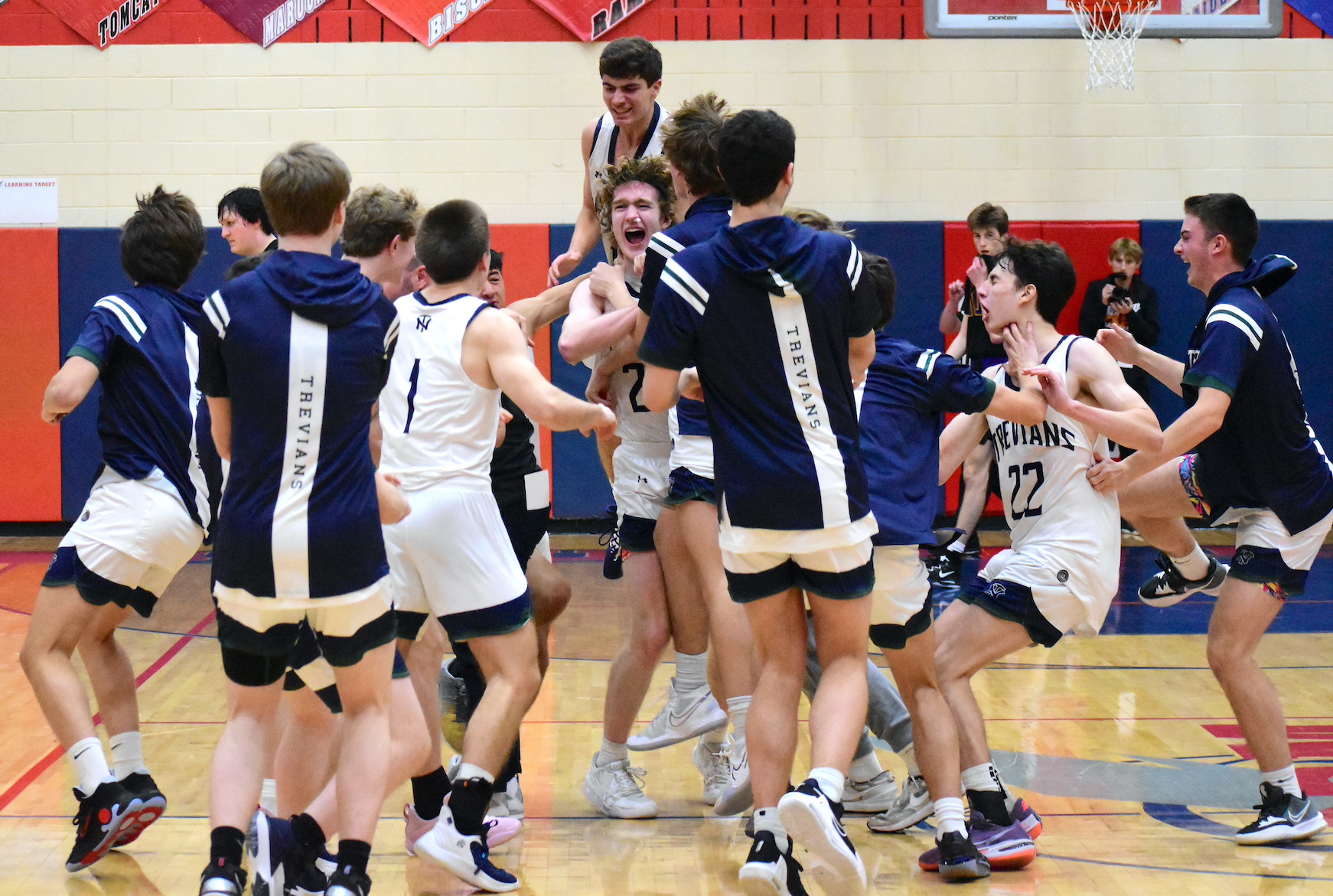 “The zone” is a sports mystery. How do you get there? What does it feel like?

New Trier junior Ian Brown is the latest to enter that promised land where it feels you can do no wrong, but 12 three-pointers later, he still can’t really answer the questions.

Brown’s 12-of-14 three-point shooting racked up 36 points for the Trevians (8-1), who erased an 18-point deficient en route to a 65-64 victory over highly touted Rolling Meadows Saturday, Dec. 10, in the South Elgin Shootout.

At that point, Brown was so entrenched in the zone he didn’t even feel the blood running down his face. The referee had to stop the game and bench Brown until his nose stopped bleeding. It was the only thing that slowed down the junior sharpshooter on Saturday.

“It’s a pretty good feeling,” Brown said of being in the zone. “I haven’t had the greatest start to the season so to have a performance like this is great, especially in a win over a team like this — a really good team — it’s a surreal feeling.”

Rolling Meadows, 9-0 and ranked No. 7 in Chicagoland by the Chicago Sun-Times, briefly grabbed the lead back when superstar Cam Christie, a Minnesota commit, sank a mid-range jump shot with 35 seconds to play.

But New Trier answered with a star of its own. Senior Jake Fiegen (14 points) converted a contested layup for a 65-64 advantage with about 20 seconds to go.

“Usually our post guy is on the baseline and I saw he wasn’t there,” Fiegen said. ” … So when I caught (the ball) on the wing and saw the baseline open, I knew I’d be able to do my move baseline — rocker step and get to the paint.”

On the Mustangs’ final play, the ball began in Christie’s hands, but three Trevians walled him off. Christie passed to an open teammate, but the game-winning attempt from about 8 feet away was off target.

New Trier coach Scott Fricke said the defensive strategy was to make Christie (28 points) get rid of the ball.

“We decided to run at Christie and he made the right choice,” he said. ” … We were going to give (it to) anybody except Christie to take that shot.”

The defensive stand was indicative of a rejuvenated second-half effort for the Trevians on that end of the floor.

“It was a combination of intensity and playing smarter,” Fiegen said. “We know Cam is their guy and they are looking for him, so just being aware of that and being on the help side and closing down on him.

“Some guys on their team made tough shots in the first half and they missed some of those in the second half. That helps.”

The 6-foot-6 Christie was guarded most of the evening by the Trevs 5-10 point guard Evan Kanellos, who had two steals in the third quarter. Fricke called Kanellos, with his relentless full-court pressure, “the heart” of the team’s defense.

While Rolling Meadows began to cool down, Brown was just heating up.

The Mustangs still held a 12-point advantage in the third quarter, but the Trevs chipped away. After four threes in the first half, Brown added three more in the third and 6-10 Tyler Van Gorp chipped in six points to trim the Mustangs’ lead to four, 52-48.

Brown did his best work in the fourth, drilling all five of his three-point attempts, many coming with a Mustang right in his face.

“After a few, obviously they’re going to be drape all over you the rest of the game,” he said. “So it’s up to me to find other guys or other people off-ball screening for me, getting me open. If it’s there, shoot.”

As shot after shot splashed the net for Brown, the performance became harder and harder to believe — unless you were Fricke.

Though his junior sixth man had not found his rhythm yet in his first varsity season, Fricke knew it was a matter of time.

“I am not surprised at all. That kid is a great shooter … an absolute knockdown shooter.,” he said. “We know that and we just took advantage of the way they were guarding. He was open and took it. It could have been Logan (Feller) or Jake (Fiegen) or any of the other guys. This was just taking advantage of a situation.”

Fricke and company are riding high after back-to-back road victories, thanks to a 52-46 victory Friday, Dec. 9, at Glenbrook South.

The Trevians stay on the road as they travel to Scottsdale, Arizona, for their annual holiday break tournament — an event they won last season. They return to Northfield to host rival Evanston on Dec. 22, and then enter the Pontiac Holiday Tournament beginning Dec. 28.