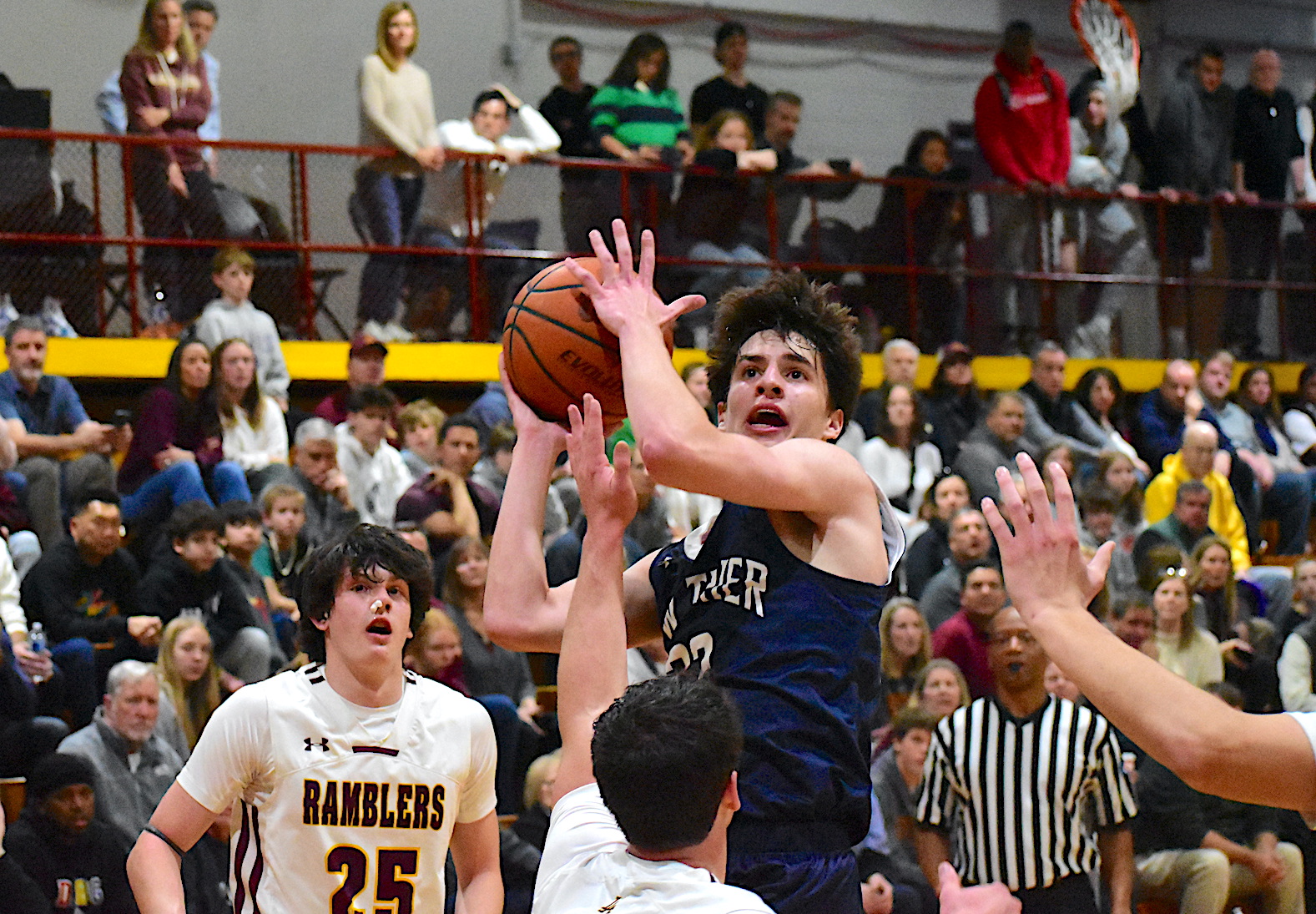 New Trier junior Logan Feller takes it to the basket in the rivalry tilt with Loyola on Wednesday, Nov. 23, in Wilmette.

After watching their female counterparts engage in a defensive tussle, New Trier and Loyola Academy decided to extend the grind on Thanksgiving eve.

Points were at a premium for most of the afternoon, but an early Trevs’ advantage was the edge they needed to take a 43-35 on Wednesday, Nov. 23, in front of a raucous crowd in Wilmette.

“If you’re going to beat Loyola on their home floor, you’re going to have to like rip their hearts out. They aren’t going to just let you do it,” New Trier coach Scott Fricke said. “I like their team a lot. They’re going to be good. For our guys, Jake (Fiegen) is the only guy who has been in this situation before. All these other guys didn’t play last year and we coudn’t have put them in a better situation than this atmosphere.”

Both New Trier and Loyola began their seasons with victories on Monday and Tuesday before meeting up in the third game of their annual co-hosted Thanksgiving tournament.

During a record-setting season last year, the Trevians were consistently ranked in the state’s top 10 and racked up a program-best 30 wins. Only Fiegen returns from last season’s starters, and by shutting him down early, the Ramblers — led by Jimmy Tarjan — tested the rest of New Trier’s lineup.

Junior guard Logan Feller was one of the Trevians to take advantage, scoring 7 of his 9 points in the first quarter as New Trier took an 11-2 lead.

“We knew they were going to come out and just be draped over Jake,” Feller said. “When that happens, driving lanes open up. I hit a three early and watching an early one go in is really big for me; it just allowed me to be confident the entire first quarter.”

The Ramblers chipped into the deficit, as junior Miles Boland scored five of his game-high 17 in the second quarter. But a buzzer-beating half-court heave by New Trier senior point guard Evan Kanellos found the bottom of the net, giving the Trevians back a nine-point lead, 18-9, to finish a low-scoring half.

Loyola’s early shooting woes were joined by turnovers in the third quarter. The Trevs forced five Ramblers’ turnovers in the period, and Fiegen finally found some space for his first baskets of the night and sophomore Colby Smith drained a clutch three-pointer as New Trier extended its lead to 12.

“We just had some really bad turnovers,” Loyola coach Tom Livatino said. “We had a tough time making some shots, had some good looks early on, but it was an uphill battle all night.

“We saw some positives. … We just have to be able to score the ball better. I thought we were pretty aggressive off the dribble, didn’t shoot it well from behind the arc and had a lot of unforced turnovers — early-season stuff that is very correctable.”

The Ramblers offensive went to work in the fourth, scoring more points in the final quarter (20) than it had in the previous three (15). Boland had 8 points and Alex Engro 5 in the fourth quarter.

With about 2 minutes to go, Loyola was within six points, 38-32, but the Trevians salted the game away at the free-throw line, making 9 of 11 in the final quarter. Fiegen — a Cornell commit and regarded as one of the state’s best shooters and two-way guards — had seven points in the fourth and finished with a team-highs in points (11) and rebounds (7). Feller finished with 9 and Kanellos with 8. Jun Yoshatani hit 3 of 4 free throws down the stretch.

Loyola is led by returning starters and leading scorers Boland and Engro (9 points), who were joined in Wednesday’s starting five by Oliver Bishop, forward Adam Doherty and Tarjan.

The Ramblers are waiting on three football players — PJ Hayes, Ryan Fitzgerald and Andrew Hollerich, who were busy preparing for a state championship game Saturday, Nov. 26 — to round out their lineup.

“We have guys who can score the ball; it just didn’t happen (tonight),” Livatino said. “New Trier is tough to play against. … With that said, I like the shots we got.

“I love this team. We are going to be good and this is just the beginning of it,” he added.