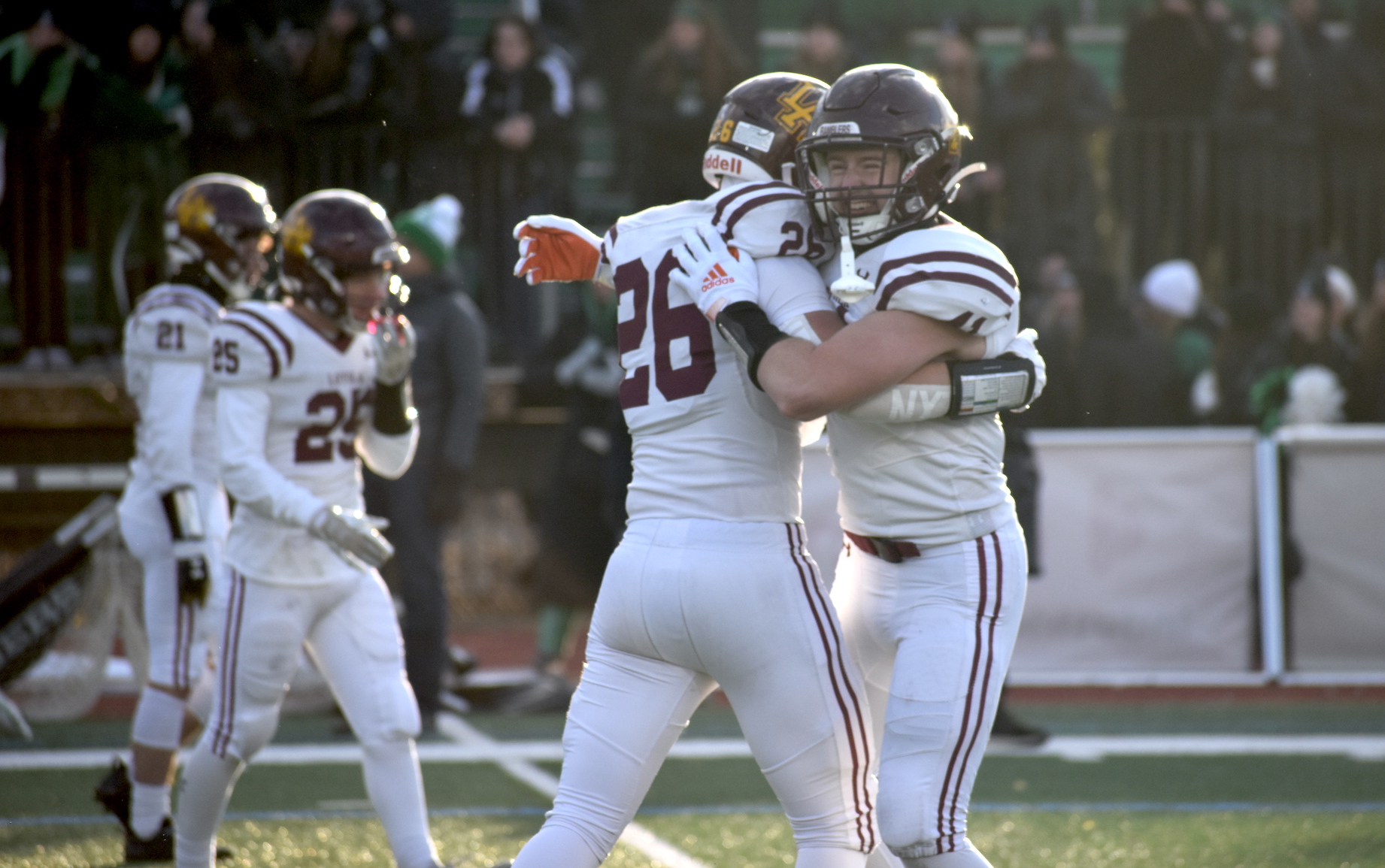 After playing perhaps their best game of the season when they trounced previously undefeated York 30-3 in an IHSA Class 8A semifinal, the Loyola Academy Ramblers will meet undefeated Lincoln-Way East for the championship at 7 p.m. on Saturday, Nov. 26, at the University of Illinois’ Memorial Stadium.

While the sixth-seeded Ramblers were scoring their compelling victory at second-seeded York on Saturday, Nov. 19, top-seeded Lincoln-Way East (13-0) was at home recording an impressive 31-7 triumph over fifth-seeded Glenbard West (11-2).

Making their sixth appearance in the final four in the last eight seasons, the Ramblers (12-1) were undaunted by the fact that they were playing a hitherto invincible opponent on the road on a bitter cold afternoon.

“Everything kind of fell into place,” coach John Holecek said. “I didn’t think this game was going to be too big for us. The first game of the season against the team from Ohio (a 44-20 victory on ESPN) and our game against Mount Carmel  (a 42-7 loss in the last contest of the regular season) were really big games.

“I think playing in the Chicago Catholic League really sets you up for games like this. You play physically tough games against great football teams with dedicated coaches and you don’t see many weak opponents. Today we were as prepared as anybody could be.”

The Ramblers opened the scoring when Johnny McGuire hurtled into the end zone from 2 yards out late in the first quarter. In the second quarter 47 seconds after a 22-yard field goal by York’s Damian Glodz narrowed their lead to four points, Corey Larson caught a long pass from Jake Stearney and went on a 70-yard touchdown trip.

“It was a very good route and Jake gave me a chance to make the play,” Larson said. “I caught it and it was a race to the end zone.”

On their next possession, the Ramblers drove to the Dukes’ 14-yard line before settling for Michael Baker’s field goal that gave them a 17-7 lead at the half.

In the third quarter they methodically continued their domination, getting another touchdown when McGuire rammed over from the 1-yard line and a 29-yard field goal from Baker.

Eight seconds into the fourth quarter they padded their lead. Baker, who’d kicked all three extra points, concluded the scoring by kicking his third field goal, this one from 21 yards out.

Baker is going into the championship game with 74 points, making him the team’s second leading scorer behind wide receiver Declan Ford, who has 78.

“With Baker there’s never a doubt,” Larson said. “The wind isn’t a factor at all. He does it all week in practice and then he goes out and does it in games.”

Baker’s kickoffs and punts also repeatedly left the Dukes in poor field position when they went on offense and the Loyola defense took it from there, holding the home team to 3 third-down conversions in 12 attempts and 1 in 4 fourth-down attempts.

Loyola continued to get good productivity from running back Luke Foster, summoned from the sophomore team because of year-ending injuries to Will Nimesheim (in the opening round of the playoffs against Plainfield South) and Drew MacPherson (on Sept. 30 at Marist).

Foster gained 96 yards in 18 carries against York, giving him 468 yards in 85 rushes during the seven games in which he has played.

”It’s a shame Nimesheim and McPherson aren’t playing on but Foster has stepped up and played well,” Holecek said.

“I’m getting used to everyone,” Foster said. “The guys on the offensive line are doing their thing and that lets me do my thing.

“As a team we have lots of momentum rolling into Champaign.”

Another important contributor to the rushing attack has been a defensive unit stalwart: free safety McGuire. To help compensate for the two ball-carriers lost to injuries, Holecek has been using McGuire from the Wildcat formation in short yardage situations.

The pair of TDs at York increased his offensive season total to three, and he has scored two more on interception returns.

“I never thought I’d be playing so much offense but I’m ready to do it,” McGuire said. “We put a lot of effort into practice and today we played an awesome game.”

Last season Loyola edged Lincoln-Way East 3-0 in a quarterfinal contest on Baker’s 32-yard field goal with nine seconds to play in the first half before losing to eventual state champion Lockport 35-21 in the semi-finals.

The Ramblers are taking a 30-2 three-season record into the championship game with Lincoln-Way East in which they will try to replicate their winning performances in 2015 and 2018. (They had a 6-0 record when the 2020 season was moved to the spring of 2021 because of the COVID-19 pandemic that also caused the State Tournament to be cancelled.)

This season they are averaging 41.5 points-per-game to 15.7 for their opponents. With the exception of the defeat at the hands of Mount Carmel, they have been dominant in every game, winning by margins ranging from 11 to 54 points.