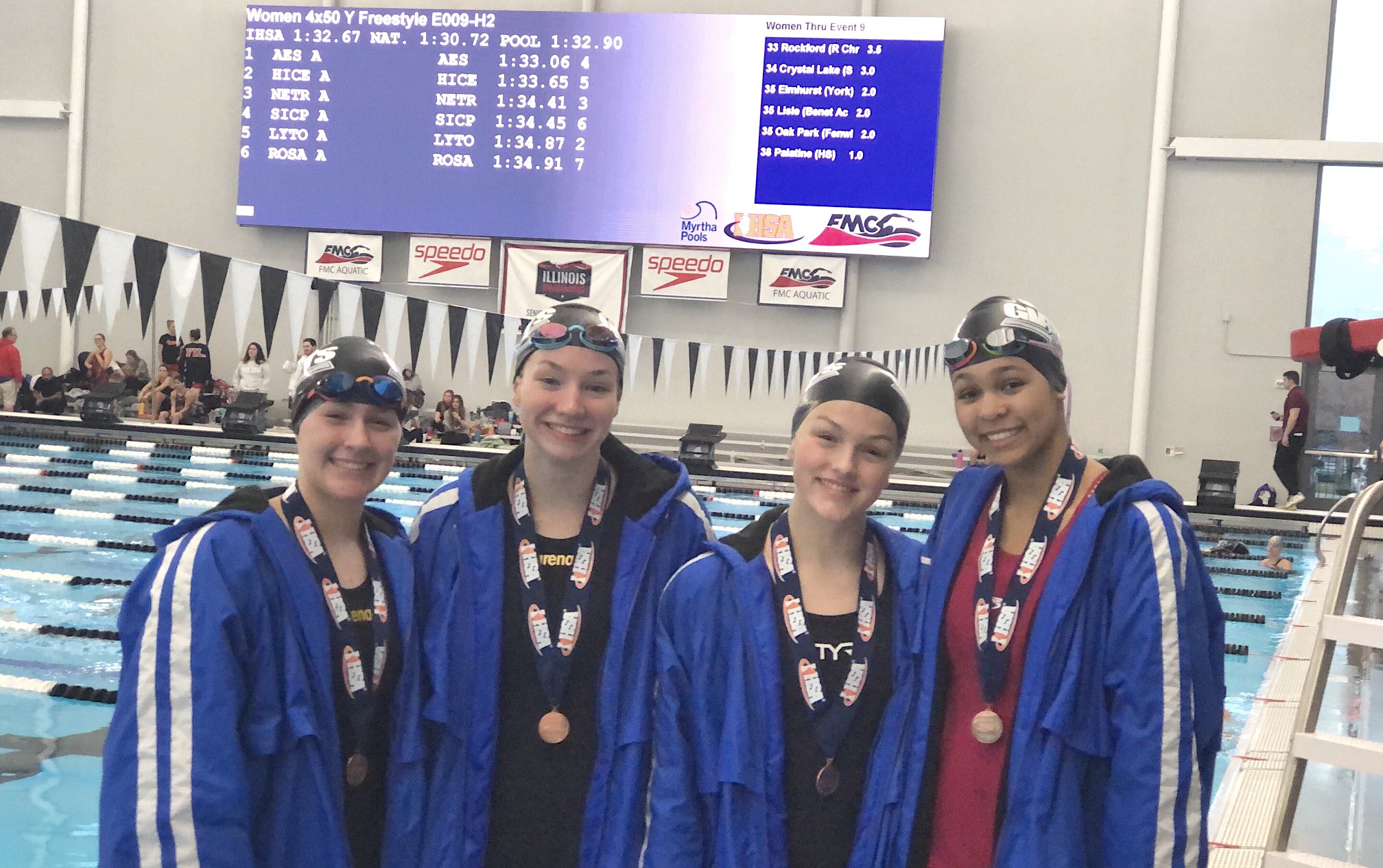 Highland Park Giant swimmers made waves all season — up to and including the state finals.

With four top-10 finishes in the championships Saturday, Nov. 12, in Westmont, the Giants placed 12th as a team. The result is the program’s best finish in at least 30 years.

Senior star Kayla Newman placed third in the 200-yard freestyle and sixth in the 500 free, while helping the 200 free relay (Newman, Sydney Lewis, Angelina Eliacin and Marisa Miller) to eighth. Lewis added a seventh-place swim in the 100 butterfly.

The team’s 200 free relay time of 1:35.32 was under the All-America standard (1:35.36) set by the National Interscholastic Swim Coaches Association — meaning that Newman, Miller, Eliacin and Lewis are the first All-Americans in program history, according to head coach Tim Sirois.

“I’m really, really proud of (all of) them,” he said. “I got very emotional at the meet. They have overcome a lot with the adversity they have dealt with. They handled it very, very well and with a lot of class. My pride in them is for not just for how fast they swam, but how they treated each other. That was really special.”

Sirois said the team’s bond was evident from the season’s start.

After an offseason of training together, the group was closer, and it showed on deck.

Sirois called every record special and pointed out Newman’s 100 free mark, which was set during the dual meet with Deerfield with Newman swimming an event she does not normally swim just to try to gain an edge over their rivals. It worked.

“All year long we knew we were not super, super deep but we got a lot of talent and a lot of heart,” Sirois said. “They approached things well all year. We are very lucky as a coaching staff to have this group. They have leadership, camaraderie and focus, and as a result, they were unified.”

Loyola Academy had four entries to the state championships with one bringing home hardware.

Sophomore Maria Cheng placed third in the 100 backstroke, coming in at 55.56 seconds and jumping three spots from her preliminary seeding.

The Ramblers also sent sophomore Maeve O’Donnell to state in the 50 free. Cheng also swam in the 100 butterfly in the preliminary round, and O’Donnell and Cheng were joined by Ana Quigley and Georgia Andrew in the 200 medley relay.