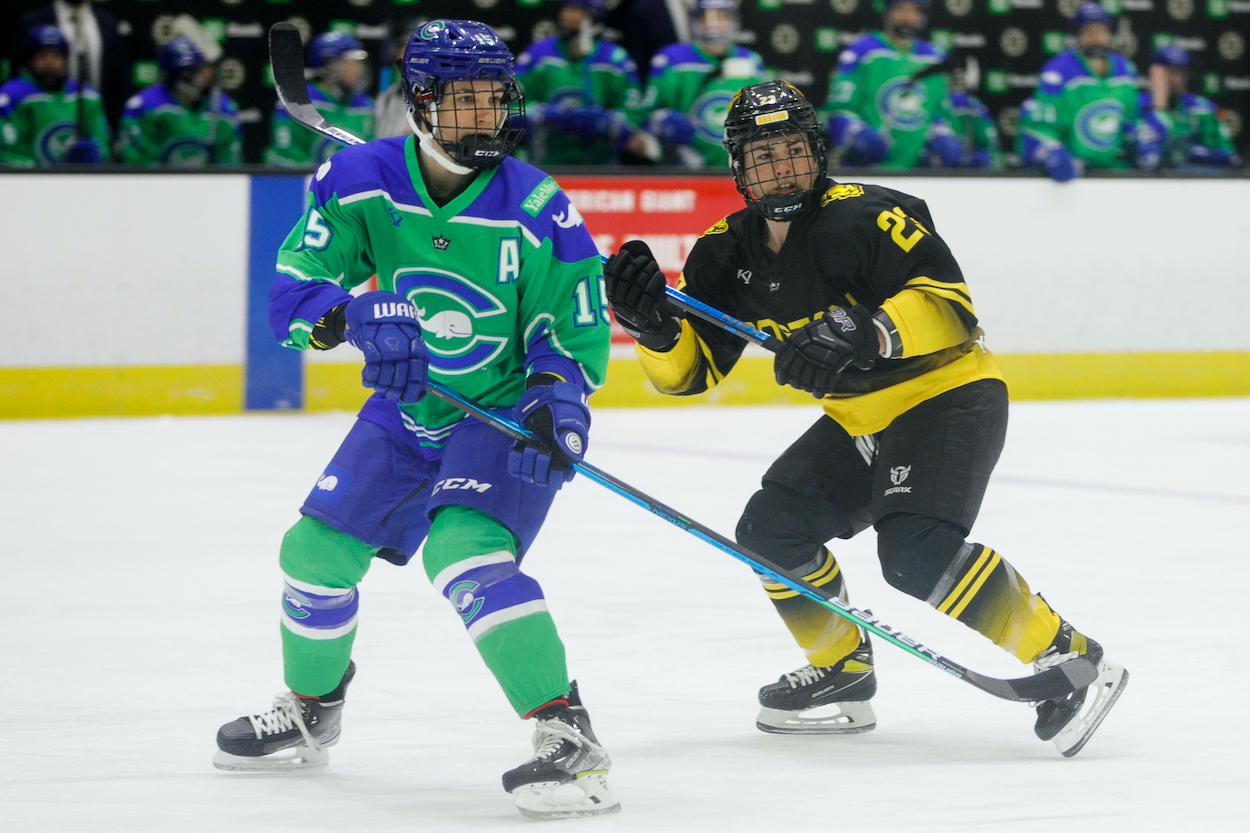 Building the future is hard work, and Emma Vlasic is putting in the hours.

On most weekdays, Vlasic completes a 9-to-5 before driving 55 minutes to the ice. There, the pro hockey player practices with her Connecticut Whale teammates to prepare for weekend competition in the six-team Premier Hockey Federation.

Then, it is back home, hopefully before midnight, for a few-hours rest before “the grind” resets. It’s exhausting and worth it — even if it may not be her future that she’s building.

“I love waking up and doing it every day, building the league to be something that women can do full time. Right now, we’re building toward that,” said Vlasic, who grew up in Wilmette. “… Whatever role I can play in that journey, whether I play two or three, or five, or one year. I love hockey. What you want to see is for it to get to a place where it can be a career option.”

The PHF — formerly the National Women’s Hockey League — began its eighth season in early November. The Whale dropped their first game 4-0 to the defending league champs, the Boston Pride, on Nov. 5. Vlasic, a member of the Whale’s leadership unit, ripped three shots in the defeat.

“(PHL) was in its early stages, I had conversations with the coaching staff at Yale. The Swedish league is pretty good, but I wanted to stay in the states,” she said. “I think for me at the time, it was about job prospects too. I knew I wanted to get a job and support myself outside of hockey and I could live with one of my friends in Connecticut. It worked out well with the Whale.”

Vlasic’s hockey origins go back to a basement and a backyard rink in Wilmette, where the three Vlasic siblings — Eric, Emma and Alex — played the game day and night, summer and winter. Maybe it was something in the water, because all three carved out unique and successful hockey journeys.

While Emma Vlasic plays in the aspirational PHF, 21-year-old Alex Vlasic is about to enter Year 2 with the NHL’s Chicago Blackhawks. The defenseman was drafted by his hometown team in the second round of the 2019 draft and saw his first ice action in 15 games a year ago. Eric Vlasic, the oldest sibling and a goaltender, has spent years with Chicago Blackhawks Special Hockey, a nonprofit for individuals with developmental disabilities.

“We’ve always been very competitive,” Emma Vlasic said. ” … but we love being together and playing together. I’m really proud of what both of them have done so far. (Hockey) is a big part of what made us so close.”

Emma played locally and stood out with the Wilmette Braves (now Wilmette Jr. Trevians Hockey). She advanced to an elite level of play with the Triple AAA Chicago Young Americans. She said she does regret not playing for the Trevians but she doesn’t know when she would have had the time.

Playing at the highest level helped Vlasic play college hockey at Yale, where she improved every season, ending her tenure as a team captain. She also earned Academic All-Conference honors as a junior.

During the day, Vlasic goes to work in sales for an investment research company. She enjoys it. Several hockey people work there, including former players. The hours work with her side hustle.

In her fourth season, Vlasic is still honing her skills, always reaching for new heights. Same goes from the Premier Hockey Federation. The league want to grow the game while offering the opportunity for the world’s best female hockey players to make a living. It’s not there yet, but it is “committed to this vision and is prepared to invest the time, energy, and resources to make it happen,” the league website says.

Vlasic enjoys her firsthand look at the growth of and talent in the PHF. And she’ll pay to see what’s next.

“The league continues to get better,” she said. “We’ve put ourselves on a bigger stage every year. The big thing is how good the players are in this league. … It is the highest level of women’s hockey there is in this country and this area. Realizing how good and how fast the game really is you gain an appreciation for how many good players there are and every year you are seeing more and more of that.”