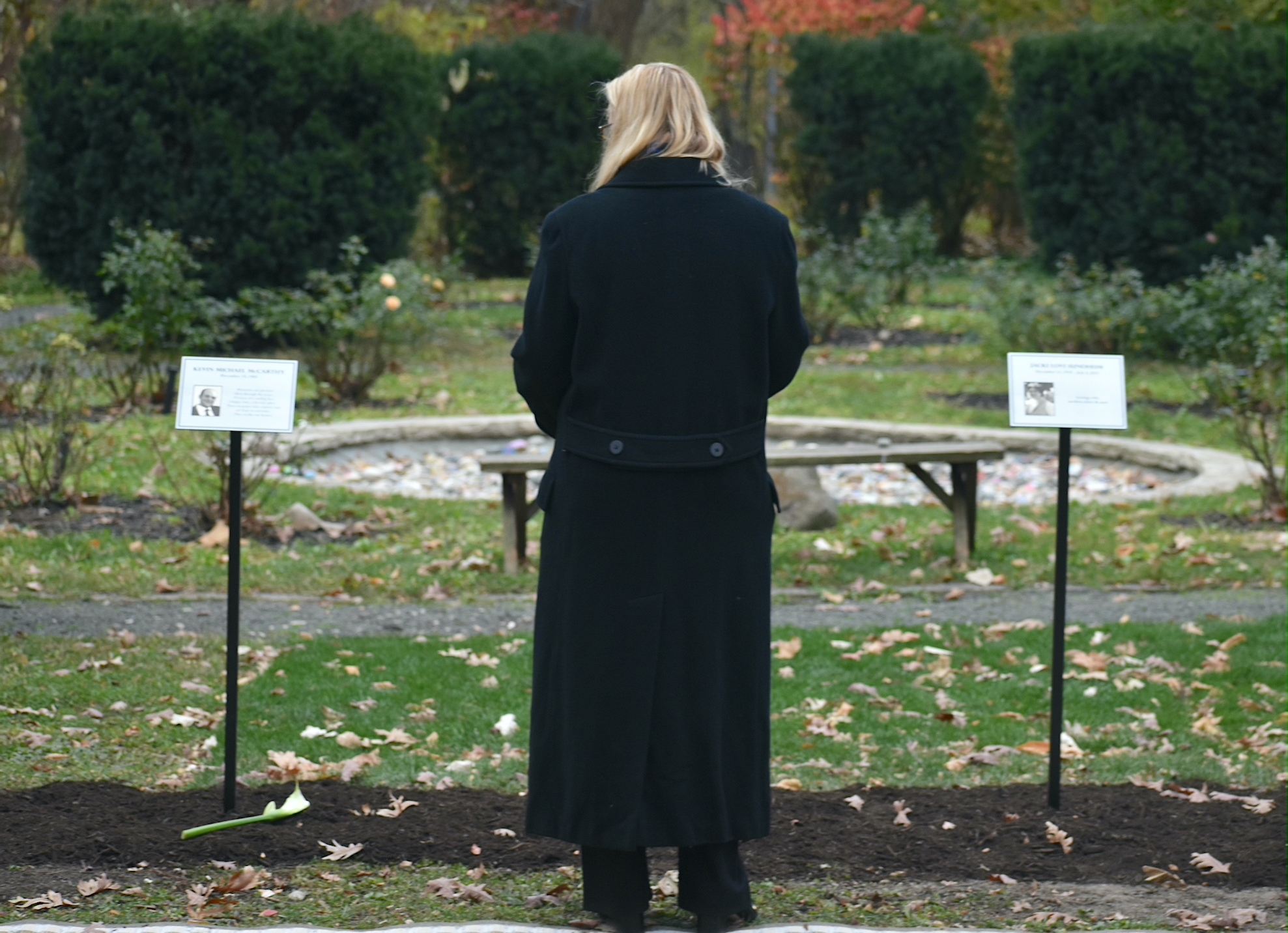 Highland Park leaders, residents and supporters have moved forward step by step in the four months since the mass shooting during the city’s Fourth of July parade. Friday marked the latest milestone in their indefinite journey.

City officials were on hand Nov. 11 to mark the opening of a temporary memorial dedicated to the victims of the July 4 attack. At the new site near City Hall — relocated from its organic beginnings at the corner of St. Johns and Central avenues — a walkway leads visitors to the entrance of the rose garden where a plaque recognizes the location as a space for “reflection and remembrance.”

“We greatly appreciated (the memorials) that came up organically in the immediate aftermath but it became clear that was also triggering for people,” Highland Park Mayor Nancy Rotering said. “So we were pleased to be able to have the partnership with the Park District of Highland Park for this space, a quieter space. … A step away from the traffic, a step away from the train. It’s a chance for people to have a quiet place to reflect.”

Highland Park’s city council made the decision in September to move the temporary memorial away from a corner that was so visible to many and “triggering” to some, Rotering said.

Rotering called the site allows individuals to “opt in to reflection, remembrance” and “not have it part of their day-to-day life unless they so choose.”

Accompanying the memorial is the Kindness Rock Garden, a project from Gratitude Generation, or g2 out of Deerfield, in which community members can paint messages and images on rocks. “Stay Strong,” “We’re In This Together,” and “HP Strong” are just some of the messages scattered among the stones.

City officials have pledged that a temporary memorial will remain until a permanent one is established. Rotering said in September that “There will not be a day where there will not be a place for our community to reflect, remember and process this event.”

During the weeks following the tragedy, Rotering said she and City Manager Ghida Neukirch thought a memorial should be up and accessible within a year; however, upon advice from the U.S. Department of Justice, they learned that was not an ideal strategy.

More than 50 individuals were shot during the attack on July 4, and Rotering said aside from the emotional damage inflicted to the entire community, many survivors are recovering from physical wounds that need more time to heal.

The City has collected feedback regarding a permanent memorial, and the City Council will begin discussing next steps in late January 2023, Rotering said.

“Every single time a decision is made, it’s got to be deliberative, got to be nuanced, it’s got to understand the multi-layered groups of folks who have been impacted by this tragedy and who now are trying to put one foot in front of the other,” she said. “The most important thing we learned was we need to give everybody — everybody — time and space as they move forward.”

On the memorial’s opening Friday, other City officials were also on hand, including council members and representatives of the police and fire departments. A comfort dog and mini horses were also present courtesy of Soul Harbour Ranch.

The temporary memorial is another step forward for Highland Park, but Rotering pointed out moving forward is not equal to moving on.

“This memorial means that people in the community are obviously still in mourning,” she said. “It is very hard when people say how are you doing to respond with anything other than we’re still in pain and we’re still very angry.”