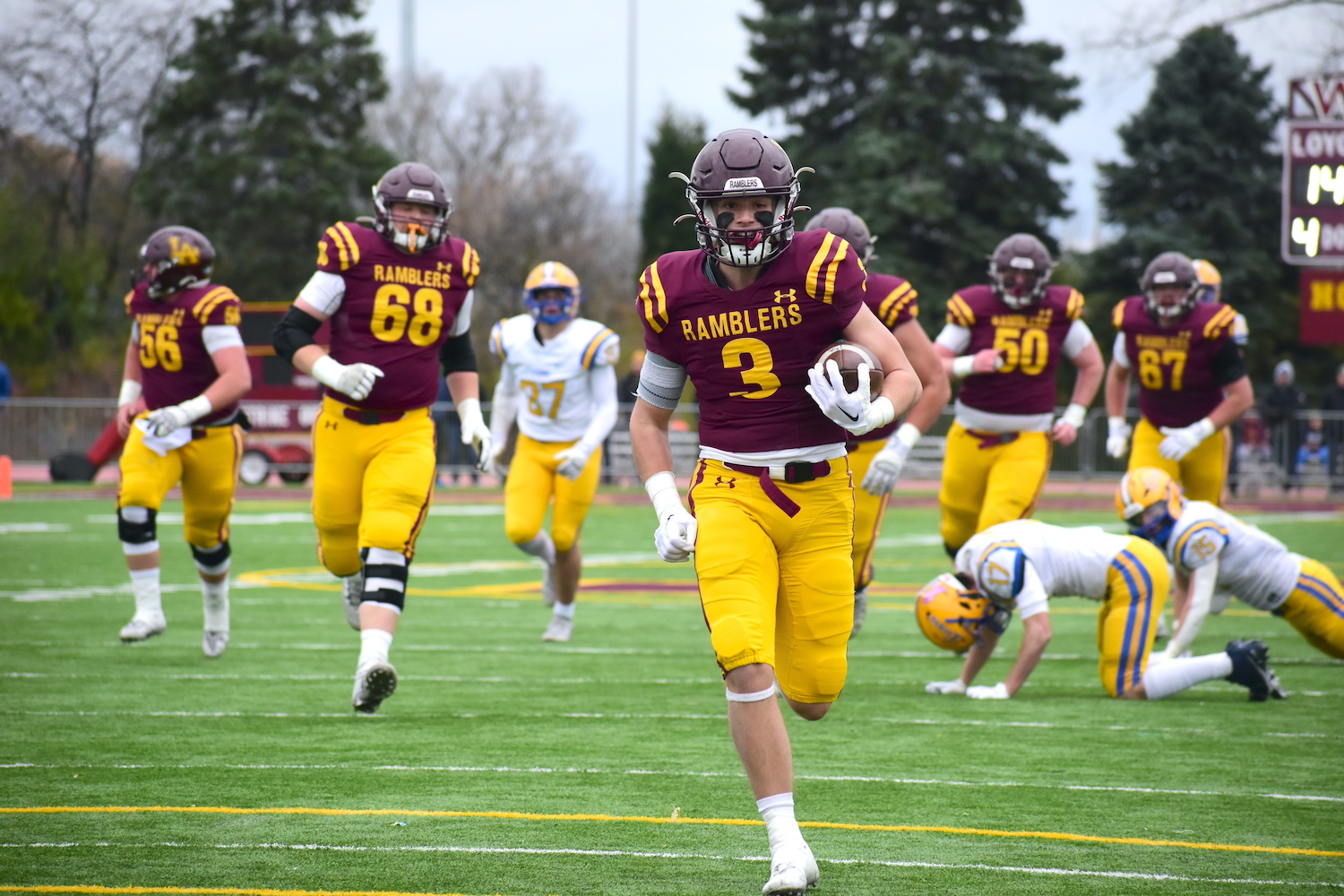 The Loyola Academy Ramblers left their loyal fans in Hoerster Field smiling when they said goodbye on Saturday, Nov. 12.

Making their final appearance of the year in the friendly confines on by far the coldest day of the season, the sixth-seeded Ramblers relied on a potent passing attack to oust 14th-seeded Lyons 30-17 in the quarterfinal round of the IHSA Class 8A state tournament.

The victory sends the Ramblers (11-1) to Elmhurst for a semifinal matchup with undefeated York, the No. 18 seed, on Saturday, Nov. 19. (Game time will be announced early in the week.)

The winner will go to Champaign to play for the state championship on Saturday, Nov. 26 in the University of Illinois’ Memorial Stadium. Loyola has advanced to the 8A final four in six of the last seven seasons, earning two state titles (2015, 2018) in that time.

While Loyola was methodically eliminating Lyons (9-3), York was surmounting an early deficit to defeat seventh-seeded Palatine 24-10. The Dukes are going into the rendezvous with the Ramblers with a 12-0 record. Lyons ended its season 9-3, and Palatine finished 10-2. On the other side of the 8A bracket, Lincoln-Way East conquered Warren 35-14 and Glenbard West bested Maine South 37-34.

The Ramblers stuck to their usual script in the quarterfinal matchup, taking a significant early lead and never letting their opponent get close.

On the Lions’ first two possessions they took possession at their own 20 following a touchback and were forced to punt after gaining only 6 yards the first time they had the football and 4 the second time.

Each time the Ramblers parlayed good field position into touchdowns, driving 50 and 47 yards, with both scores came on passes from Jake Stearney to Declan Forde on plays covering 12 and 27 yards, respectively.

“On the first one I had to make up for that dropped ball on a fade (in a second-and-5 situation) at the 7 (yard line),” Forde said. “(Following an illegal procedure penalty against Loyola) Jake trusted me and gave me another chance and I got the touchdown. On the second one Jake saw me open and put the ball in my hands.”

David Waight’s 25-yard field goal early in the second quarter reduced the Ramblers’ lead to 14-3 but Loyola immediately retaliated with a 79-yard touchdown drive. Stearney connected with Quinn Foley on a 30-yard touchdown and Michael Baker kicked the extra point, giving them a 21-3 halftime lead, and it proved to be insurmountable.

“Offensively they like to run the ball — we thought if we could jump ahead of them it would force them to throw the ball,” Loyola coach John Holecek said. “With (defensive backs) Gabe Gyorgy and Ty Ottoson out (because of injuries) our third and fourth cornerbacks, Joe Auer and Emannuel Ofosu, stepped up and played a heck of a game.”

The Lions’ defense stiffened in the second half, and Ryan Jackson hurled a 21-yard touchdown pass to Noah Pfallin early in the third quarter and a 7-yarder to Graham Smith with 3:43 left in the game.

Sandwiched between those two TDs were Stearney’s 10-yard scoring pass to Spencer Leadbetter late in the third quarter and Baker’s 36-yard field goal early in the fourth quarter.

“Although Spencer didn’t have the looks Declan had today, he scored a nice touchdown late in the game,” Stearney said. “It wasn’t a very good pass but he made a phenomenal catch.

“All the chemistry we’ve built up over the years is paying off.”

Not only was Stearney’s passing the Ramblers’ primary weapon (15 completions in 22 attempts for 170 yards), he did damage as a runner (6 carries for 40 yards).  Some of the rushes came on plays designed for him to run; others on scrambles.

“Last year was a big learning year,” Stearney said. “I ran a lot because my pocket presence wasn’t there. Learning from that, this year I’ve been staying in the pocket more but when I run I have the confidence.”

Loyola was dominant in both defensive departments. Jackson accounted for 186 yards on 18 pass completions but he had 16 incompletes and Auer had an interception at the Loyola 22 late in the first half. He also was ineffective as a runner with minus-13 yards to show for three scrambles in the face of intense pressure.

All told, Lyons had only 25 net yards to show for 14 rushing attempts versus the Ramblers’ 128 yards in 37 attempts.

Loyola running back Luke Foster — who was promoted from the sophomore team because of season-ending injuries to Will Nimesheim and Drew MacPherson — led the ground game with 60 yards in 20 carries. His backup, Ryan Craddock, a senior who spent most of his varsity career as the holder on extra points and field goal attempts, ran six times for 19 yards and caught one pass for 5 yards.

For the second week in a row, the Ramblers’ star free safety Johnny McGuire, moved to offense to take the snaps in the Wildcat formation on short-yardage situations and he delivered 6 yards in two runs.

McGuire also played a strong defensive game and he recovered the onside kick after the Lions’ final touchdown to squelch any hopes they had of making an incredible comeback.

“We’ll be using Johnny more (as a runner),” Holeck said in assessing the ground game. “Luke has shown he can play (on the varsity level) and Craddock is a bigger kid who has some speed and quickness. Craddock has shown some good things. Today he broke his finger and played through it.

“Lyons has a very physical defense and hadn’t given up a lot of points.”

Prior to the quarterfinal contest, the most points scored against the Lions came in their opening game of the season when they won 38-35 at Buffalo Grove. In their two regular season losses they yielded 28 and 27 points. They scored fewer than 17 points only twice, 14 and 10 points in both of those defeats.

“Up front they are a very talented and very physical team,” Loyola’s Michigan-bound defensive end Brooks Bahr said. “We had to steal their will-to-win right from the start and that’s what we did.”