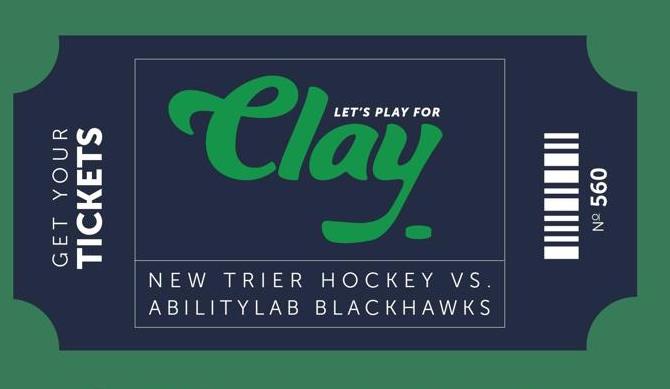 When the puck drops this Sunday, the only thing more intense than the game will be the heart behind it.

Let’s Play for Clay — a charity sled hockey game between the New Trier Hockey Club and 4-time NHL sled hockey champions, the AbilityLab Blackhawks — takes the ice on Sunday, Nov. 13, at Centennial Ice Arena in Wilmette. The event begins at 4 p.m. and tickets can be purchased online.

The event will raise funds both for the Shirley Ryan AbilityLab Adaptive Sports program, and the Scherb family of Winnetka.

New Trier sophomore Cole Scherb is a goaltender on the NTHC JV team. Cole’s brother Clay, a senior also at New Trier, experienced a life-changing spinal injury in August and has since received rehabilitation therapy at Shirley Ryan AbilityLab.

Let’s Play for Clay gives the hockey club players a chance to support their teammate Cole and his family, and fulfill a longstanding philanthropic mission. By playing against the AbilityLab Blackhawks in sled hockey — a modified, sit-down version of the ice sport — the team will raise awareness for adaptive sports in addition to raising funds.

Proceeds from the event will help the Scherbs cover the costs of extensive in-patient rehabilitation and at-home modifications and will also go to the Shirley Ryan AbilityLab Adaptive Sports program, which provides sports and recreation opportunities to individuals with a physical disability at no cost.

“One of my goals for NT hockey is to help the boys apply the lessons of teamwork off the ice. For example, providing an opportunity for them to give back to the community that has supported them,” NTHC Director Adam Cheris said.

This mindset manifests in a charity fundraiser undertaken by the players every year. While NTHC receives most of its accolades for athletic success, this year the players’ support of their teammate and the cause is what most impresses board members.

“Typically, it’s the parents who plan and drive the fundraiser, but this year, the boys are stepping up and taking over almost every aspect of the event,” said Jody Savino, an NTHC board member. “From selling tickets on social media, promoting the event by talking it up to their buddies, to volunteering to pitch in to run the event — there are even several boys who are planning to join the Shirley Ryan Junior Board.”

“I’ve never been around a group of boys who have been so helpful and willing to chip in,” said Roxy Freel, NTHC board member and philanthropy chair.

The event is from 4-6 p.m. Sunday, Nov. 13. Tickets are $10. To purchase tickets and T-shirts and to make a donation, visit the New Trier Hockey Club website.