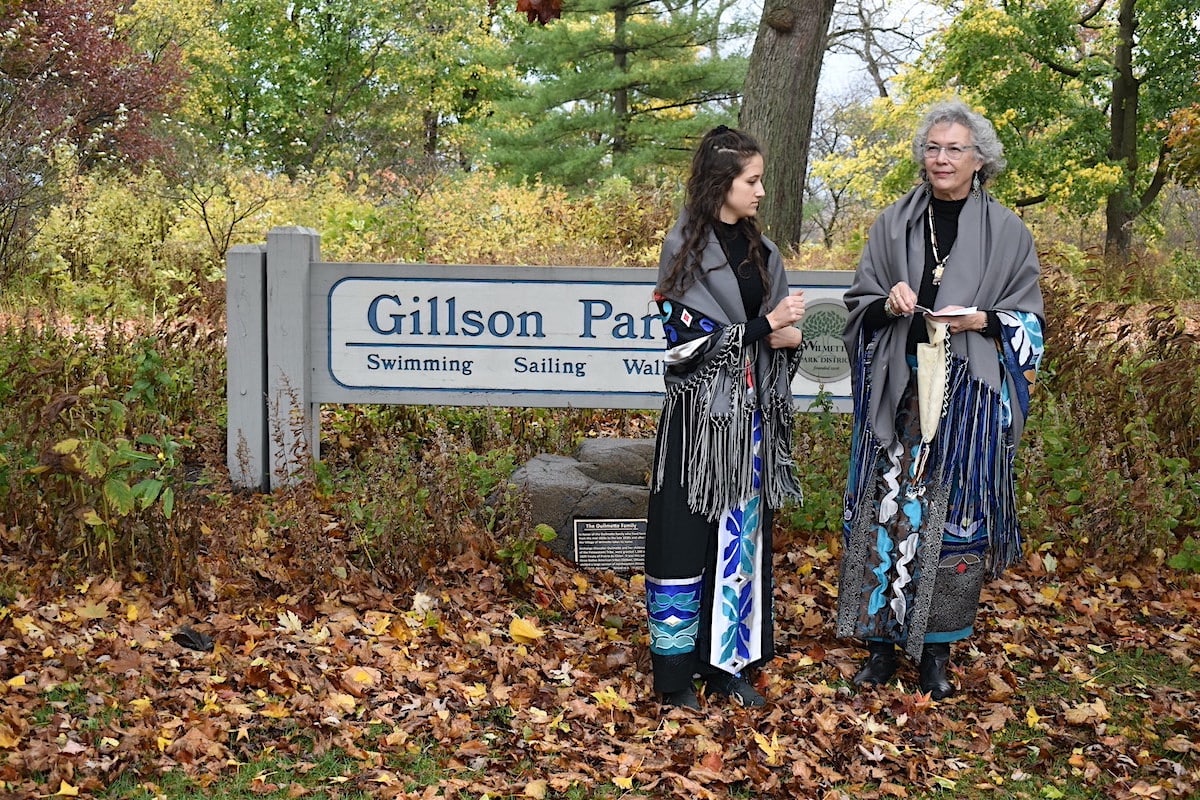 Sharon Hoogstraten (right) and her niece, Ryley Hoogstraten — descendants of the indigenous inhabitants of Wilmette's land — during the dedication ceremony of a plaque at Gillson Park. | Photos by Peter Kaspari/The Record North Shore

“Each of us are here today as a result of the love of thousands.”

Those words spoken by Sharon Hoogstraten on Saturday, Nov. 5, in Wilmette reflected the importance of honoring ancestors now and in the future.

Hoogstraten was a guest of honor at a plaque dedication honoring her ancestor, Archange Chevalier Ouilmette, and the native people on whose land the village was founded and on Saturday rededicated.

Ouilmette was a Potawatomi woman whose land became what is today the Village of Wilmette. The plaque is at the intersection of Lake and Michigan avenues, the entrance to Gillson Park where the Ouilmette family’s log cabin and gardens once stood.

Hoogstraten, a seventh-generation descendant of Ouilmette, began her comments by saying “Bosho,” the Potawatomie word for “Hello.”

“It’s an honor and duty to bear witness to my ancestor, Archange Ouilmette … to know she walked this earth with her husband, Antoine, and her children.”

Hoogstraten admitted that, while she was happy to speak, it came with reluctance.

“Sometimes I feel the hubris of me being a spokesperson for the Ouilmette, for the Potawatomis, for native America,” she said. “But at the end of the day, the other choice is to not speak at all, so that’s why I put myself up here, but, again, with some humility.”

The dedication included a Potawatomie ceremony.

“It’s another of our ceremonial traditions to leave tobacco for our ancestors,” Hoogstraten said. “We’re often told to remember their journey in the four directions.”

With a mix of four traditional herbs, Hoogstraten and others in attendance faced each cardinal direction, starting in the east and going clockwise. Every turn meant leaving just some of the herbs behind, as she explained the importance of each direction and what the herbs and colors represented.

Following the ceremony, Hoogstraten said she was “completely amazed” that so many people attended, especially given that part of the ceremony had to be moved indoors because of heavy rainfall and wind.

“It means a lot to walk where your ancestors walk,” she said, adding “You look back on where you came from and all the trials and tribulations that those survivors went through. You have to stop and think about that and thank them.”

The rededication ceremony included a formal acknowledgement from Village President Senta Plunkett that Wilmette was founded on native land belonging to the Council of Three Fires, consisting of Potawatomie, Ojibwe and Odawa.

She expressed “gratitude to the native peoples who have cared for the lands for many generations.”

The Village of Wilmette marked its sesquicentennial with a year’s worth of activity, including a special project, a multi-use pathway in the VIllage Center called Ouilmette Way; and an all-day bash, called THE Wilmette Block Party, on Sept. 12

“We’re taking us back to where it all began,” she said.

The plaque replaces one that was installed in 1954 for Wilmette’s centennial celebration.

“This new plaque more accurately centers the story on the Native Americans of the region and on Archand Ouilmette and her children, who were granted the land on which we stand,” Plunkett said. “We’re happy to be able to make this change.

“We hope that this plaque is noticed and that this is a place where you will stop to reflect, to bring your children, bring your grandchildren, and will inspire us to learn more about the Native American peoples whose land on which we live, not just as past history, but as part of our communities in our world today.”