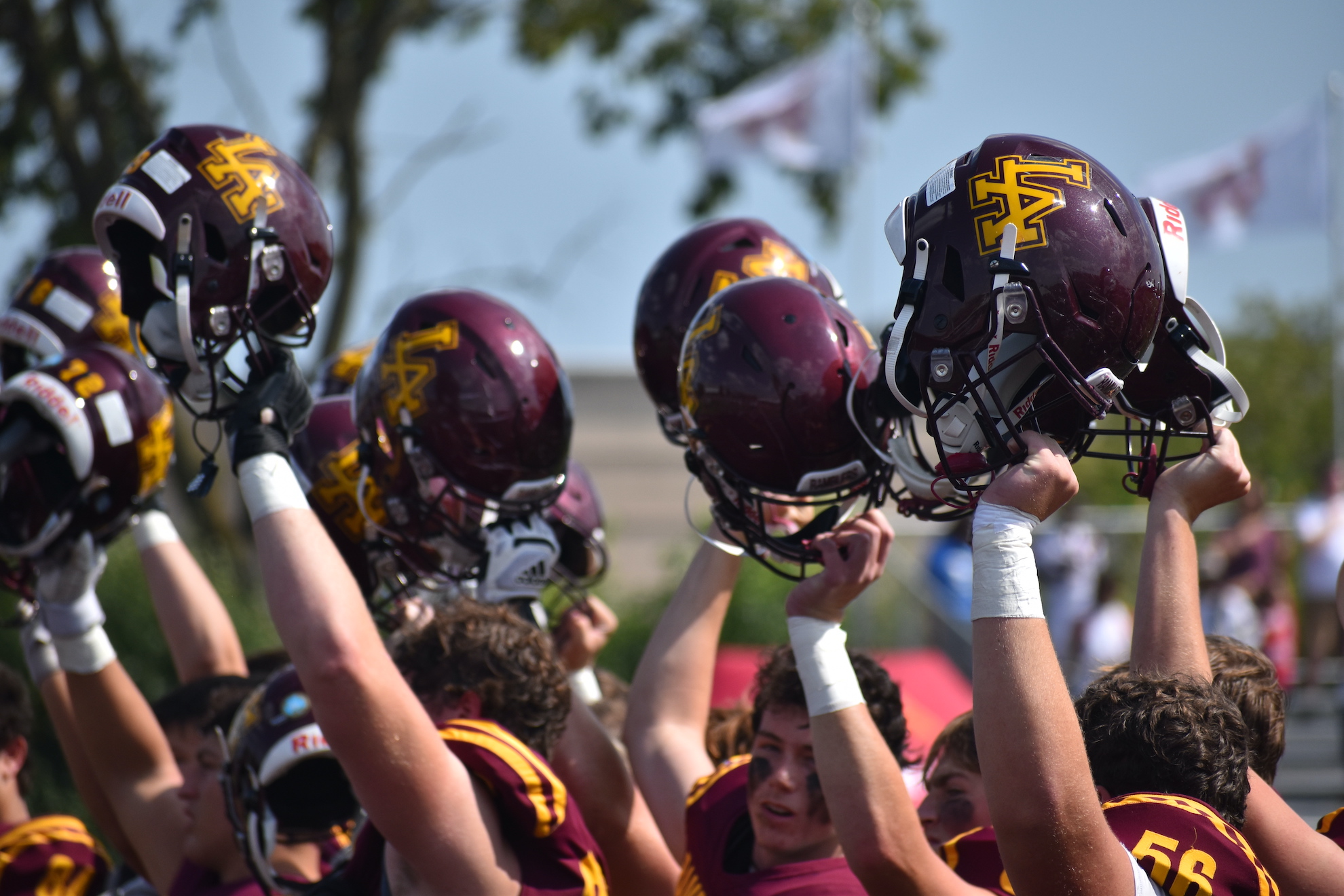 The 575-mile round trip bus trip to Edwardsville turned out to be a joy ride for the Loyola Academy football team.

The sixth-seeded Ramblers hit the 22nd-seeded home team with their best shots in the first half when they scored 35 unanswered points and went on to efficiently win the IHSA Class 8A second round playoff game 49-21 on Saturday, Nov. 5.

In their Saturday, Nov. 12 quarterfinal game, the Ramblers (10-1) will be playing in the friendly confines of Hoerster Field when they take on 14th-seeded Lyons Township (9-2) — time yet to be determined. Lyons advanced on Nov. 4 by surmounting a 10-point halftime deficit to take down previously undefeated and third-seeded Plainfield North 24-13.

The Ramblers had played Edwardsville twice before and both times it was a struggle. In a 2017 Class 8A semifinal, they came home with a 17-10 triumph and in the second game of the regular season in 2014 they had to go into overtime to gain a 29-28 victory at Hoerster Field.

This time it was a completely different story.

“I think this is the best team we’ve faced all year,” coach Matt Martin of Edwardsville (7-4) told RiverBender.com beforehand, and the Ramblers made his pregame fears a reality.

Edwardsville kicked off and on the first play from scrimmage quarterback Jake Stearney ran 74 yards to put the Ramblers on the Tigers’ 7-yard line.

For the first time Holecek used his star senior safety Johnny McGuire on offense, employing him as a running back in the Wildcat short-yardage formation. Following Stearney’s long run it took two plays for McGuire to reach the end zone. He gained 4 yards on his first carry and then scored the touchdown.

“I definitely enjoyed it,” McGuire said of his new role. “It was a lot of fun.”

Holecek had to improvise because he was minus starter Will Nimesheim and his backup, Drew MacPherson, the running backs who had accounted for 53.5 percent of the team’s rushing yardage in the previous 10 games. Nimesheim suffered a season-ending knee injury in the opening round rout of Naperville South, and MacPherson is out for the year because of a broken ankle he sustained in the Sept. 30 victory at Marist.

Nevertheless, the Ramblers running game was a significant factor at Edwardsville as sophomore Luke Foster and seniors Ryan Craddock and Peter Hogan collaborated with Stearney and McGuire to fill the void.

“Lots of good runs,” Holecek said. “Our offensive line played extremely well and we had a great game plan to take away some of the best things from their best player (on defense). We didn’t pass much because of the wind (that gusted at speeds up to 35 mph) but we were effective when we did.

“The wind was definitely a factor. They have an explosive passing game and their quarterback (Jake Curry) was not accurate. He had a rough day.”

“He was missing his receivers over the middle and our D-line was putting a lot of pressure on him,” McGuire added. “I can’t recall playing in a game where the winds were that strong.”

The Tigers didn’t get on the scoreboard until just under three minutes to play in the third quarter when Kellen Brnfee scored on a 1-yard pass from Curry.

But 2 minutes 41 seconds later Craddock answered with a 48-yard touchdown run and the third quarter ended with Loyola commanding a 42-7 lead.

Second string quarterback Luke Collins and wide receiver Corey Larson collaborated on a 16-yard touchdown pass and Michael Baker kicked his seventh extra point to restore the Ramblers’ 35-point lead and make Joey Demare’s catch of an 8-yard pass from Curry in the final 19 seconds an exercise in futility.

In the Ramblers’ many previous blowouts Holecek began clearing his bench in the first half but this time he took a cautious approach and didn’t start extensive subbing until the second half.

“With the wind like that and the fact that they are explosive we wanted to protect our lead,” he explained.

Stearney completed seven of nine passes for 39 yards and Collins two of four for 28 yards, while Curry was on the mark in only 10 of his 29 attempts for 123 yards.

On the ground, the Ramblers were led by Foster, with 166 yards in 20 carries, and Craddock, with 96 in nine carries.