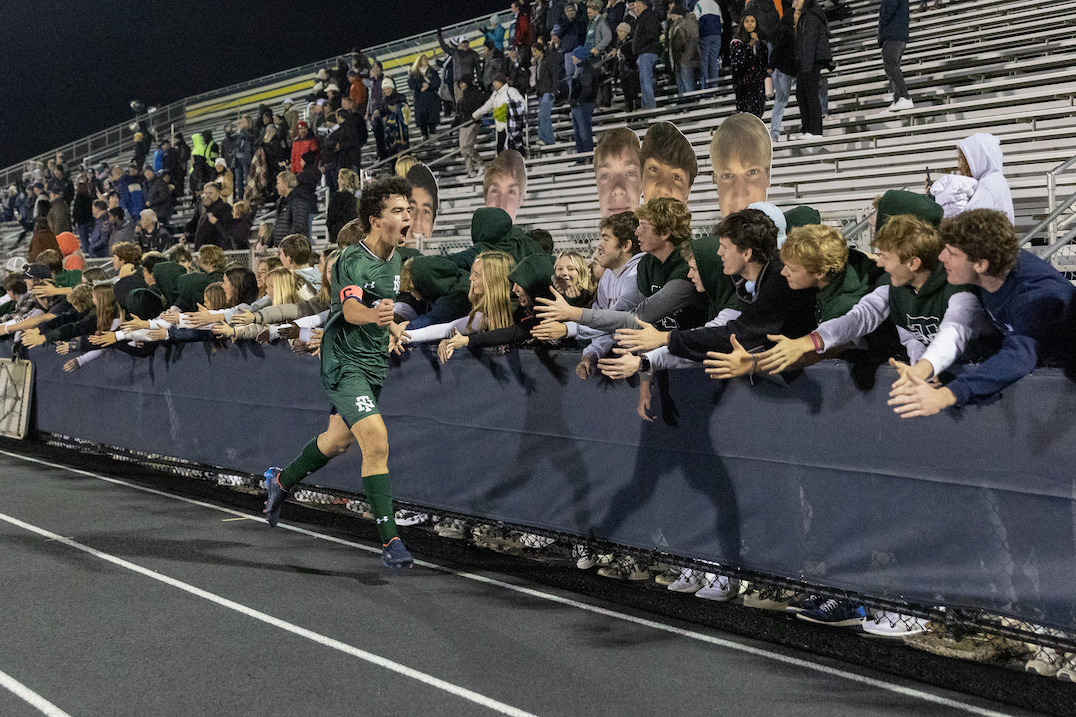 New Trier and its boys soccer program have had great success under the leadership of head coach Matt Ravenscraft.

The team has won five conference titles and seven regional titles and sent numerous players to play at the collegiate level.

But one thing was missing from the resume — until now.

The Trevians captured their first sectional under Ravenscraft by topping upstart and eighth-seeded Lane Tech 2-0 on Friday, Oct. 28, at Glenbrook South. It was the program’s first sectional championship since 2014.

“This is really special,” Ravenscraft said. “These boys, I’m so proud of them for the way they’ve competed over the last two weeks.

“In this moment, I’m thinking about guys that have competed every year and been regional champs or conference champs and set that standard and bar that we compete at a high level during the postseason. Things haven’t gone our way and we’ve been unlucky at times, but this week, it did. Credit to these boys, it’s a great feeling, but know that playoff soccer is a challenge and winning really hard games in the playoffs is a challenge.”

Like all season, seniors played a critical role in the sectional-title win with Aidan Nicholson and Theo Franzen tallying the goals.

“It’s an indescribable feeling,” Nicholson said. “As Theo always likes to say ‘We’re here and we’re building our legacy.’ In the pregame huddle, we talked about how this game isn’t just for us, but for all the alumni who set the stage for us to be able to be in this game and we feel this is not only for us, but also for them.”

Theo Franzen knows the past playoff struggles well. His older brother, Will, played on some of those heartbroken teams, and Theo remembers a certain moment Will shared after one of those losses.

“Him losing in the 2019 playoffs to Evanston, it really shocked me,” Theo Franzen said. “I remember that feeling after the game. I was really sad for him. I texted him after that and since then, I’ve always had the motivation of being the best that I can be.”

That motivation showed up early on Friday.

Just under four minutes into the match, the senior midfielder knocked in a goal that helped set the tone for the rest of the match.

“When we were playing 11 (versus) 11, the space wasn’t that open and we had to cross the ball in more and the space was outside,” Franzen said. “My chemistry with Karsten (Segal) is unmatched and when he cut it and somewhat crossed it, I deflected it off their defender, cut it in, I saw the net and shot it.

“I couldn’t really see because the sun was in my eyes, but I just heard everyone screaming, so I ran to the corner and started celebrating. It was an indescribable feeling.”

The Trevians defense did its job early, limiting Lane (15-5-1) to very few opportunities. New Trier did not allow a shot on goal until more than 20 minutes had passed.

The Champions’ first true chance came with 19 minutes, 28 seconds remaining when sophomore Benicio LaCerda put a shot on frame that carried just over the goal.

New Trier (18-1-5) caught a break with 1:47 to go in the half when a Lane player was sent off after a red card, leaving the Champions undermanned for the final 42 minutes.

The Trevians did not have to do anything unfamiliar to exploit the man-down situation.

“There’s obviously going to be an advantage for the team playing a man up,” Nicholson said. “In this game, they were only playing with two midfielders, so we were able to overload and have a 4 (versus) 2 in the middle, which is something we practice a lot.

“But also, it’s important not to become complacent when there’s so much time left. It’s important to come into the second half thinking it’s like the beginning of another game and not that you’re up a player.”

Nicholson sealed the deal for the Trevians with 28:20 remaining, when he headed home the team’s second goal.

“I saw the ball go up in the air and went hard for it,” Nicholson said. “I tried to jump as high as I could and get a head on it.”

The Trevians have not lost since Sept. 3, when they fell 2-1 to Lyons in the Northside College Showcase title game; however, draws against the Glenbrooks (North and South) in the final two conference matches prevented them from winning their sixth consecutive conference title.

After those ties, something changed with the Trevians, who have outscored their opponents 27-3 with five clean sheets in the month of October.

“We’ve just competed,” Ravenscraft said. “After the GBN tie, that was on a Tuesday night, the rest of the week we had our best week of training and competed really hard. The boys really dug deep, they showed grit, they showed resilience and they showed they weren’t going to be satisfied with not doing something special this season.”

Team unity was key to the turnaround, and Nicholson said everybody has been pulling in the same direction.

“A big driving factor for us has been brotherhood,” he said. “Our teams have always taken account for it, but this year it feels like amazing to play with so many other people I’ve been playing since I was 4 or 5.

“It’s such tight-knit chemistry. Every day in the locker room, every day at practice, we know we have each other’s back.”

One of the reasons for the success has been the play of Franzen. The senior midfielder has scored five goals this month, including four in the playoffs and three in the past two games.

“My brother stepped it up in the playoffs. I’m just trying to follow in his footsteps.”

The Trevians advance to the supersectional on Tuesday, Nov. 1, at Hersey High School in Arlington Heights. Kickoff for that match is set for 6 p.m.

And Ravenscraft said his team has more in the tank.

“Tonight probably wasn’t our best performance of 80 minutes of soccer,” he said, “and I think the boys and coaching staff realize that, but we’re just excited to have another opportunity to go out there and compete and hopefully put a better game together.”