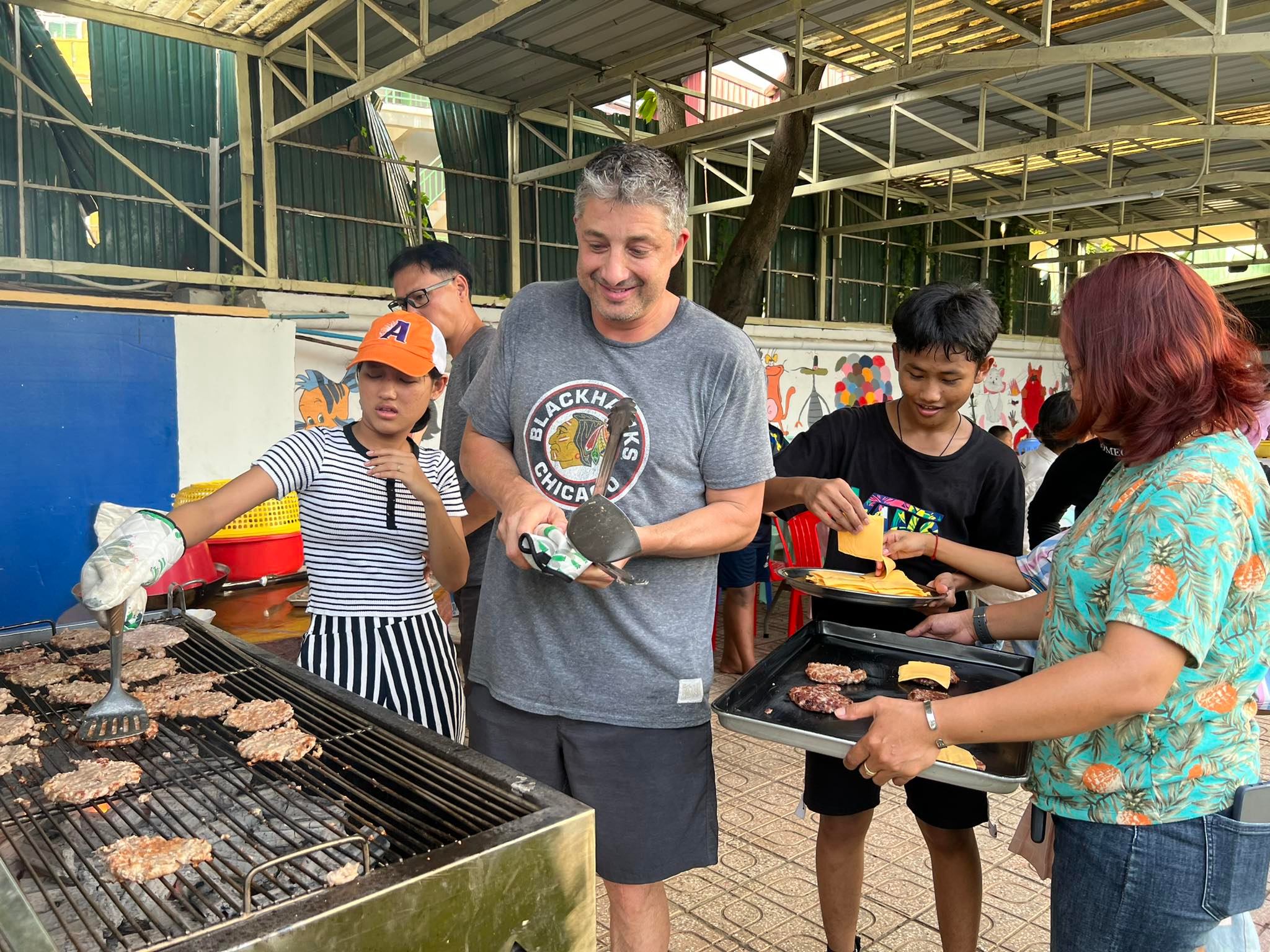 Joey Morelli, of Max's Deli in Highland Park, cooks up burgers with children in Cambodia on a mission trip with Joey's Food Fight. | Photos submitted

Max’s Deli in Highland Park will transform its cuisine from Jewish Deli to Cambodian Street on Tuesday, Nov. 1, during the second fundraiser supporting Joey’s Food Fight.

Only 10 months old, the aptly named nonprofit has already made a difference in the lives of children living in the Cambodian capital of Phnom Penh. The organization is also helping Max’s owner and Food Fight founder Joey Morelli live out his dream of cooking for kids in orphanages worldwide.

Morelli has been a chef all his life and, with no children of his own, began thinking about bringing his “superpowers” of cooking and building professional kitchens to places where they are most needed, such as underserved orphanages around the world.

His first goal is to cook for children in 10 countries within 10 years.

Early this year, Morelli met Eric Lyons, of Deerfield, a first responder who had seen this need in Phnom Penh in person. Lyons had taken over a safehouse there, which he named Hope House, and started the charity Hope for the Silent Voices, which he plans to bring to more regions of Southeast Asia.

Morelli saw Hope House as a chance to do exactly what he had wished. He held a fundraiser at Max’s last May that raised $30,000. Along with his own money and a grant of $5,000, Morellia had enough to visit Hope House in July.

“I went with no expectations and the goal of rebuilding their kitchen and cooking for the kids,” Morelli said.

He found a kitchen with a single-burner stove, one refrigerator and items stored on the floor. Working solo, he built a three-compartment sink, dish station and shelving. He also bought a new stove, oven and grill. And he cooked, teaching the children as he did.

“My philosophy is that I cook what the kids want,” Morelli said. “They wanted American food — pasta, burgers, hot dogs; we even made pizza one night.”

Nutritious and tasty meals, along with the new kitchen, have made a big difference. Panda, a Hope House resident, said, “I am incredibly grateful to Chef Joey for serving us memorable dishes and making our mouths water when thinking about your food.”

Lyons wrote, “We are now able to broaden our cooking options with the new oven and grill provided by Joey and Joey’s Food Fight. The prior kitchen is no longer recognizable. And that is a wonderful thing. Another byproduct of Joey’s time, attention and focus was in teaching the kids and staff how to broaden their own cooking capabilities. The kids and staff were very eager to learn how to better approach efficiency and sanitation in the kitchen. … The kids and house mom are now much more effective in their food prep and the time it takes to create their meals.”

Morelli was amazed by the food scene in Phnom Penh. There were huge open air markets with fruit, vegetables, fresh seafood and chickens raised on pasture, but lacking sanitation. He went all over the city to find sources of nutritious food for the Hope House children.

Morelli also learned from the kids how to make their own cuisine, the Cambodian dishes that will be featured on Nov. 1 at Max’s. Two dishes on offer will be beef lok lak, which is Cambodian street food, and seafood amok, a more upscale dish featuring crab and different fishes in a stew with citrus, coconut milk and Cambodian chilis.

Since returning from Cambodia, Morelli has continued to provide funding for meals at Hope House and has done cooking presentations for the children via Zoom. Most recently, he taught them how to make chocolate chip cookies.

The November fundraiser will help Morelli return to Phnom Penh in January, where he will begin the second phase of his Joey’s Food Fight model.

“I’m going to have two missions to each country. During the second mission, I want to make the kids my sous chefs,” he said.

While in Cambodia he will research the possibility of locating a cafe near Hope House, where residents who learn chef skills could work when they are ready: “Maybe the kids will be my teammates,” Morelli said.

Locally, Morelli serves on the board of Stand Up for Kids, a teen shelter in the Lakeview neighborhood of Chicago. He cooks there regularly, as well as for Fill a Heart 4 Kids in Lake Forest, among other shelters.

Going forward, Morelli wants to raise money for his missions mainly through social media outreach. He will livestream and record his experiences abroad. Several videos from July are available already.

Morelli’s staff at Max’s has pointed him toward his next destination: Mexico. He said they have told him about the great needs of children in Mexico City and remote areas beyond the city. Morelli will announce this next plan at the Nov. 1 event.