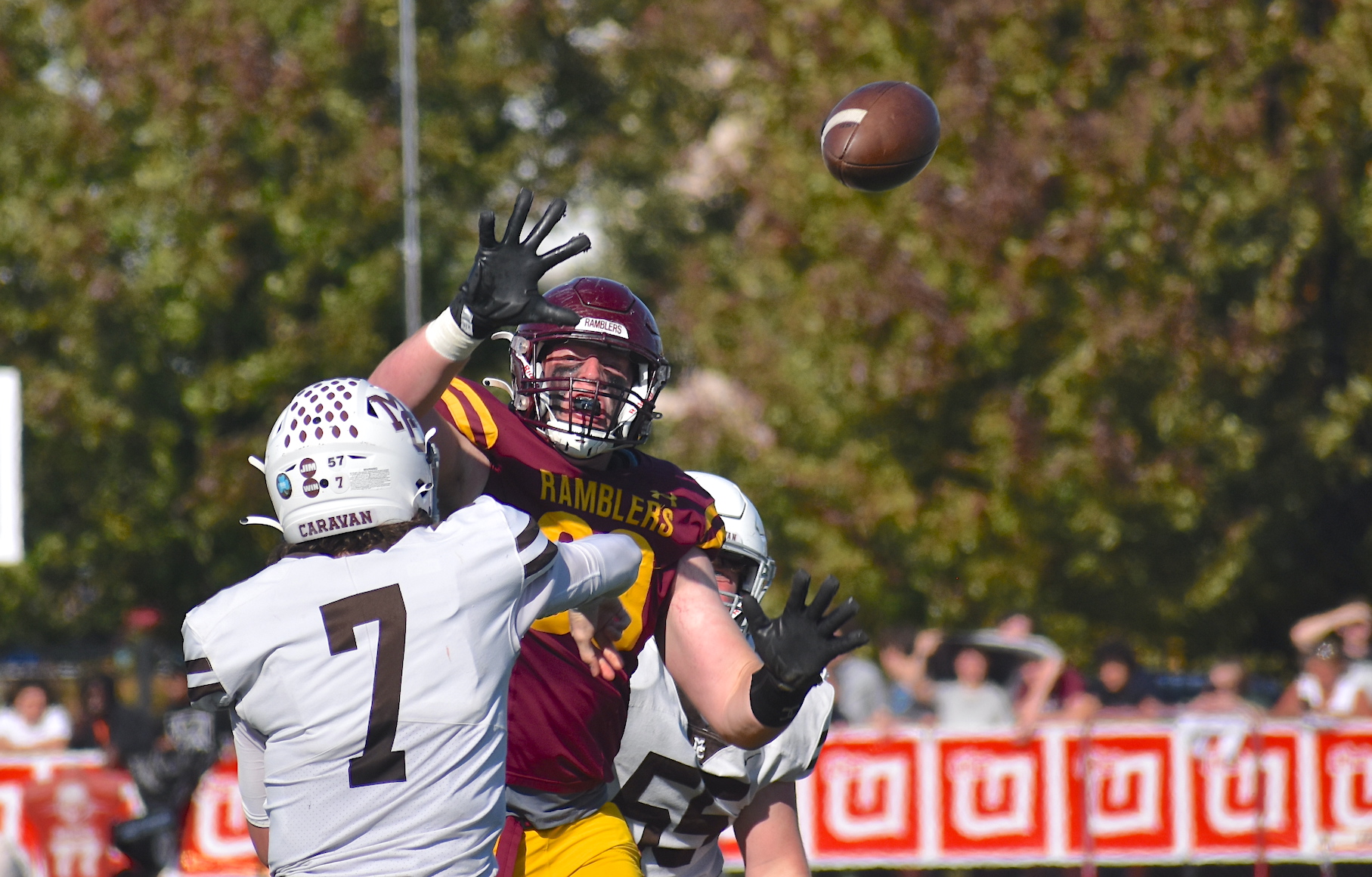 Loyola Academy’s dominant football performances are commonly the subject of admiration and envy from the opposite sideline.

But after unbeaten Mt. Carmel came to town Saturday, Oct. 22, and in the immediate aftermath of a competitive loss, Ramblers coach John Holecek had big praise for the opposition.

“That’s a heck of a team and they made a lot of plays,” Holecek said. “The third quarter was a disaster for us. That I thought was the big shift, but man, we’re still really close to a really good team. Offensively, those skills, I don’t think I’ve ever seen anything like it.”

The Caravan scored three touchdowns in the third quarter to flip the script on the host Ramblers and catalyze a thrilling 42-37 victory a Hoerster Field in Wilmette.

The win gave Mt. Carmel the Chicago Catholic League Blue championship and the No. 1 overall seed in the IHSA Class 7A postseason. Loyola finishes the regular season 8-1 and settles for the No. 6 seed in the Class 8A bracket.

The Ramblers entered the second half with the ball and a 24-14 lead, but Mt. Carmel scored on its first three possessions — including two scores in 20 seconds with an assist from a Loyola fumble — while the Ramblers squandered their first three turns.

“We just came out flat,” Loyola quarterback Jake Stearney said. “… We were up and in the locker room had good thoughts and spirits, but we can’t start the second half with a turnover, punt and three and out.”

The Ramblers scored on their next two possessions — a 4-yard Will Nimesheim run and 24-yard Spencer Leadbetter reception — while conceding one more score to the Caravan. But the Ramblers defense stood tall to force a late punt and set the stage for a dramatic finish with the score 42-37.

Taking over with 2:24 to go at their own 24-yard line, Loyola moved the ball — aided by two pass interference penalties — to the Caravan’s 39. On fourth-and-3, however, Stearney’s pass attempt skipped off the turf with no receiver near it.

“I probably don’t want to tell you what play we were running, but it was just miscommunication on our part, as a whole,” he said. “We were going for it. We battled our asses off and they did too.”

After the heartbreaking loss, Loyola’s collective temperament was mild, given the scenario.

The Ramblers and Caravan have state-championship aspirations that a regular-season result cannot disrupt.

“There’s a lot to learn from this game, especially going into the playoffs,” Stearney said. “We have to look at this not so negative … more as a learning experience. And this game will fuel us going forward in the playoffs.”

Holecek shared Stearney’s sentiments, but added a caveat: “as long as you can stay healthy.” And that was not necessarily the case for the Ramblers, who saw offensive lineman Brady Moffitt and defensive lineman Davidson Hagedorn sidelined with leg injuries.

Holecek said he hopes his “banged-up” players can rest their respective ailments early in the postseason.

Loyola got on the board first in the juggernaut clash, touted by many as the state’s game of the season. Mike Baker drilled a 45-yard field goal after the Ramblers defense turned Mt. Carmel over on downs to start the game.

The Caravan took a short-lived lead, which the Ramblers countered with a 24-yard rushing score from Stearney, who finished the game with 71 yards rushing and 179 yards passing (13 completions, 31 attempts). Spencer Leadbetter was the top target, finishing with five catches for 72 yards.

By halftime, Loyola had added two more rushing scores — Quinn Foley for 12 yards and Nimesheim for 2 yards. Nimesheim finished with 109 total yards (66 in the second half) and two scores on 23 touches.

Mt. Carmel’s star quarterback Blainey Dowling threw two first-half touchdowns and added one throwing and one passing touchdown in the second half. On the afternoon, he was 13 of 26 passing for 140 yards. Star junior running back Darrion Dupree only played in the first half and had 82 yards rushing, including a 49-yard run. Senior wideout Dennis Furlong ran six times for 106 yards, highlighted by a 60-yard rush.

The Caravan overcame 13 accepted penalties that cost them 106 yards, while they outgained Loyola 407 to 324.