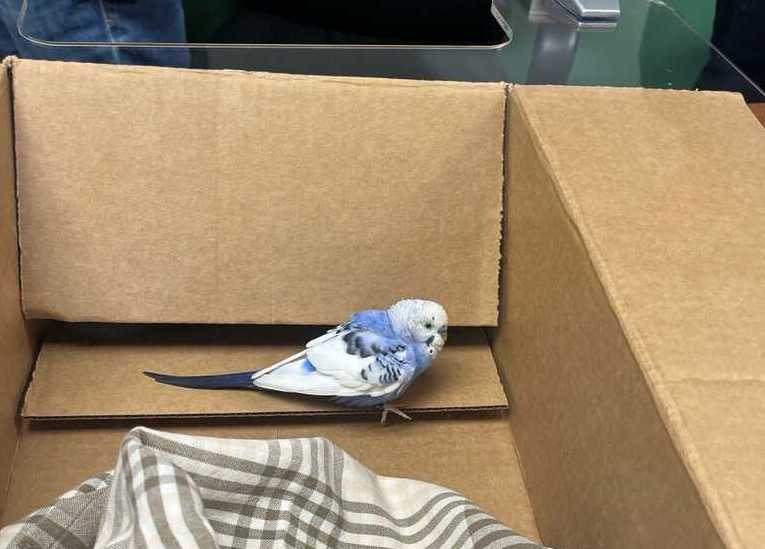 Birdie the parakeet is held at New Trier until being brought back to his family. | Photos submitted

When the students and staff at New Trier High School’s Northfield campus begin their days, they are most likely to learn, see their friends and colleagues, enjoy a lunch period, and maybe take a test or quiz.

Avian rescue is not typically in the curriculum.

But it was a vital part of the school day on Monday, Oct. 17, when a feathery mystery ended with a reunion that one North Shore family worried would never happen.

After New Trier classes began that morning, Principal Paul Waechtler said some students came to the administration offices with an unusual story.

“(They) said their teacher sent them because there was a parakeet in the hallway,” Waechtler said.

After talking more with the students, Waechtler said staff members went to investigate and “sure enough, there was a little blue parakeet sitting in the hallway during that time.”

Members of the school’s physical plant services department contained the parakeet between a box and a plexiglass shield to ensure it didn’t escape.

The parakeet was brought to the administration offices, where staff tried to figure out what to do next.

While administrative assistants Liz DaSilva and Laurae Nielsen cared for the bird, communications coordinator Lia Fahs decided to see if she could find the bird’s owner.

“When I first saw the bird, I was like, ‘Has anyone checked Nextdoor?’ and I don’t think anyone had,” Fahs said.

Nextdoor is a social media site that acts as a local neighborhood message board.

Fahs logged on to the site and searched for the word “parakeet.” Almost immediately she found what she was looking for.

“And sure enough, (the search) generated a post that said 21 hours ago, someone had posted about a blue and white parakeet that had gone missing,” she said.

That post was made by Kativa Matsko, a Northfield resident who wrote that her family’s pet parakeet disappeared on Sunday, Oct. 16.

Ethan Matsko said Birdie had been out of her cage on Sunday morning and didn’t want to get back in.

“My dad opened the door to let the dog out, and she just slipped right out,” he said. “And we all started walking around the blocks looking for her and listening for her chirping, but we didn’t hear anything.”

It was around this time that Kavita Matsko made the post on Nextdoor, but Ethan said he wasn’t holding out much hope that it would work.

“I didn’t think it was going to work, because the chances are low of someone actually catching a bird,” he said.

Sunday evening, the family heard Birdie chirping from a tree in their backyard and tried to lure her back into her cage, but it wasn’t working.

Shailan Matsko said they stayed in the backyard until it got dark, but Birdie still would not come down.

“So, we left the cage out by our porch,” he said. “And we have these speakers outside, so my dad played bird chirping noises.”

The speakers, which were left on all night, did not work either, and the next morning, they couldn’t hear or see Birdie anymore.

With the boys at school, neither of them knew about New Trier’s efforts to complete a reunion with Birdie.

On Matskos’ post, Fahs commented with a photo of the parakeet and provided phone numbers for the family to call. Kavita Matsko responded to Fahs’ message Monday afternoon and immediately drove to the school to pick up the family’s beloved parakeet.

“It was almost too good to be true, but it ended up being true,” Fahs said.

After school, Ethan Matsko went to get inside the family car and saw the birdcage — with Birdie inside.

“She was really tired and exhausted,” Matsko said. “She looked like she was sick because when birds get sick, they puff up a lot and they don’t do much at all.”

The Matsko family is astonished that Birdie ended up at New Trier, as their home is more than a mile away from the campus. Ethan said that Birdie would had to have flown across the Edens Expressway in order to get there.

Another mystery remains: How did Birdie end up inside the building?

“That we have not been able to figure out,” Waechtler said. “We have looked, but we have not found any definitive way. (We don’t know) if it just kind of hopped in, or a student found it outside and held it for a couple minutes and then it flew away, or what. We have not figured out how it got into the building, or even on campus.”

Everybody involved is grateful for the way Birdie’s adventure ended, with a family reunion. Waechtler said it shows New Trier’s commitment to the community. He praised DaSilva and Nielsen for caring for the bird and Fahs for her work in finding the Matsko family.

“This was obviously a team effort on that end,” Waechtler said.

Fahs echoed his comments and said if the family hadn’t responded to her message, Nielsen was willing to step up.

“Laurae was even kind enough to offer to bring the bird home with her if it ended up being that way, because she had a cage and supplies at home,” she said. “It’s reassuring to see how much everyone cared about this sweet animal.”

The family is especially grateful for the actions of New Trier’s staff, saying it means so much to them that all of them took such care of Birdie.

“I realized that a lot more people cared about her and it wasn’t just us,” Ethan Matsko said.

“We knew this was a long shot, but we just felt so heartened by the way people pulled together to help us get reunited with our little parakeet,” Kavita Matsko said. “It was a lovely example of community in action.”

As for Birdie, well, she just took a little vacation and is happy to be home.

“She’s perfectly fine and like nothing ever happened,” Ethan said.