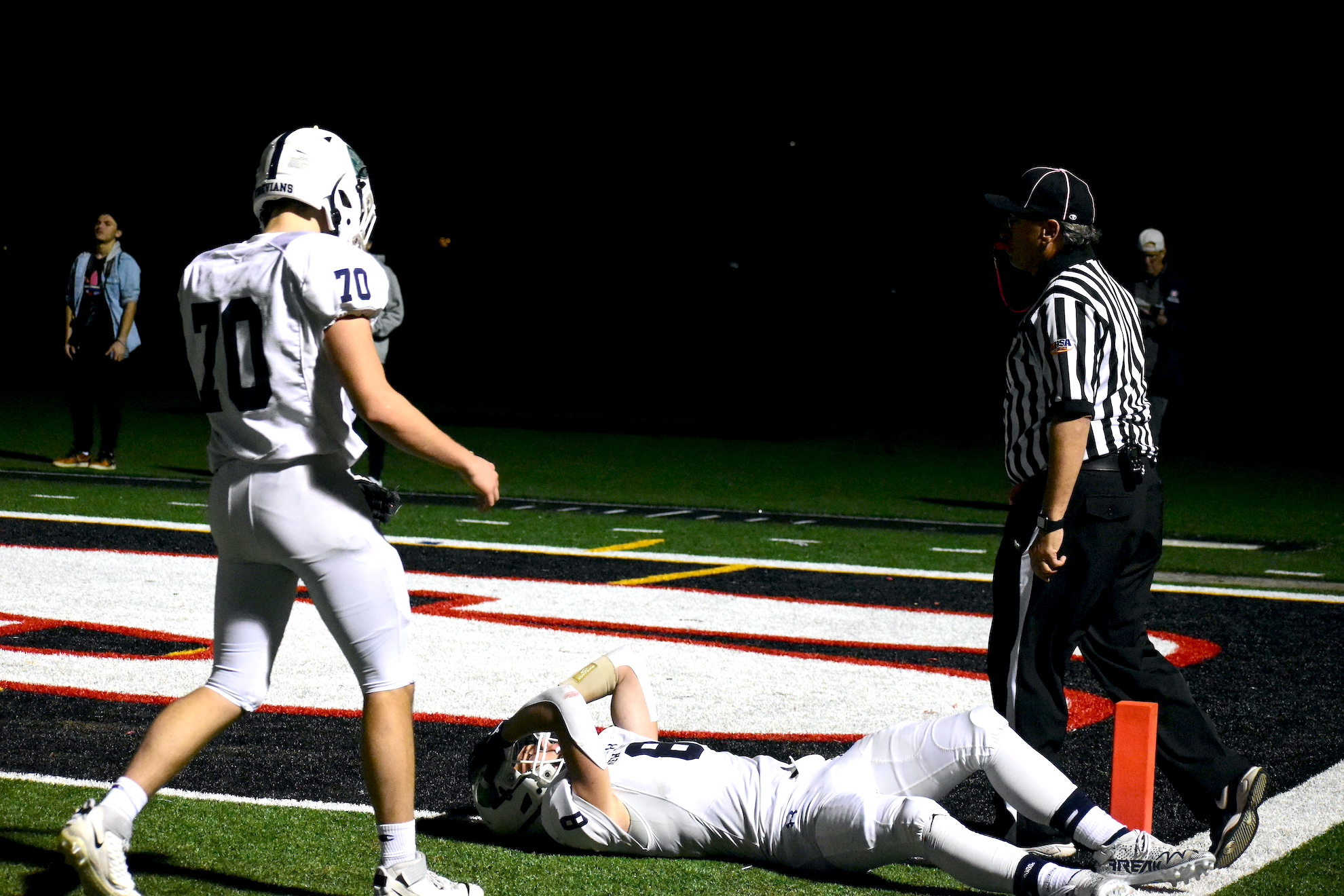 A football game rarely has so many twists and turns. It’s just a shame New Trier has seen this ending before.

New Trier frequently finishes its regular season against conference titan Maine South, and often, such as the past three seasons, the tense clashes conclude with a Hawks’ celebration.

Playing to extend their season, the Trevians pushed the Hawks to the brink Friday, Oct. 21, only to be pushed back at the goal line in a 28-21 overtime loss in Park Ridge.

Maine South began overtime with a one-play scoring possession, putting the pressure on New Trier to match. But on fourth down from the 4-yard line, a Trevians’ pass sailed past its intended target, Miles Cremascoli, who was headed to the ground after contact with a defender near the goal line.

“To me it’s a clear as day pass interference call,” Trevs coach Brian Doll said. “And I don’t even think it’s close. I think it’s a ref bring scared to make a call there. … We were there and we can’t leave it up to the refs at the end of a game; we have to finish our own business.

“I know no one likes hearing complaints about the refs, but on our sideline, it was clear as day it was pass interference.”

The loss pushed New Trier to 4-5 on the season, one game shy of playoff eligibility; though, one or two four-win teams may be pulled into the field of the IHSA Class 8A postseason tournament. The playoff brackets will be announced Saturday evening, Oct. 22.

After an 0-3 start to the season, the young Trevians — featuring a sophomore quarterback, junior lead receiver and plenty other underclassmen — went 3-2 down the stretch, capped with an all-out effort against one of the top teams in the state.

“We’re playing for our playoffs lives. You want to see that grit, that determination,” Doll said. “We’ve grown this year. We really had no one coming back with experience. Tonight we’re starting 16, maybe 17, juniors and sophomores on the field. They’ve grown up a lot. For them to compete against a team that is always ranked in the top 10 in the state, it showed me a lot. It bodes well for the future.”

The Trevians took a seven-point lead, 21-14, with five minutes to play thanks to an outrageous touchdown catch by Cremascoli.

Breaking free near the goal line, Cremascoli leapt to snare an 8-yard pass with one hand, juggled it and laid out to secure it he dragged a toe in the end zone.

“That’s a play we put in this week,” Cremascoli said. “I saw the ball go up and I just went up and grabbed that ball, made sure I had my feet in. Felt great after that catch.

The lead held until the two minutes to go. The Trevians punted from deep in their zone, and Maine South followed with a quick 50-yard drive, highlighted by 30 rushing yards by Michael Dellumo and a 12-yard Trevians’ penalty.

Dellmo punched in a 1-yard run to bring the score even and send the game to overtime.

Before and after the Hawks’ game-tying score, the Trevians had possessions in their own territory but could not move the football, running six running plays. Doll said a strong wind in his team’s face affected the Trevs’ play calling.

In OT, the Hawks scored on their first play, a crafty option reverse that Maurice Densmore ran to pay dirt from 10 yards away.

“It’s just a trick play and a good call,” Doll said. “We’re in man coverage and our safety ran across with the receiver. … It’s not a play they’ve run the entire year that we’ve seen on film, and it was a good call.”

New Trier had four chances to answer. Pass attempts fell incomplete on first and second downs, and a third-down pass went to Cremascoli for five yards before the final incompletion.

The Trevians racked up nearly 300 offensive yards on the evening, while the defense forced four turnovers.

“The team kept battling. We showed a lot of heart tonight,” Trevs senior offensive lineman Tyler Hurley said. “Obviously it didn’t end the way we wanted to, but really proud of all my brothers and the way we battled tonight.”

While Maine South scored first on the night, New Trier answered with two second-quarter touchdowns — both Heneghan passes to sophomore Trey Meyers (8 catches, 129 yards) — to take a lead into halftime.

The second New Trier score, which followed an interception from the Trevs junior Elliott Hirschle, came off a flea flicker, and Henneghan found a streaking Meyers in stride for a 35-yard score.

Along with Hirschle’s pick, New Trier also forced and recovered three fumbles. Liam Fitzgerald forced one and recovered one. Cremascoli and Colton Berg recovered the other two. And senior linebacker Will Morrison forced another.

The Hawks knotted the score, 14-14, early in the second half with an interception return for a touchdown.

The Trevians had two field-goal attempts to take a second-half lead — a 56-yard attempt by sophomore Niki Dugandzic fell just short and a grounded snap on a 24-yard attempt led to a blocked kick.

Cremascoli’s acrobatic third-quarter touchdown was preceded by a 42-yard reception by Meyers, who was pushed out of bounds while sprinting the sideline, and then leapt in front of his defender to corral the deep ball from Heneghan.

“We can really battle and go out there and do what we want to do,” Cremascoli said. “We just have to keep trusting in ourselves and working in the offseason how hard we worked during this in-season. We showed if we do all the work and push ourselves to our limit and it’s going to turn out good for us.”