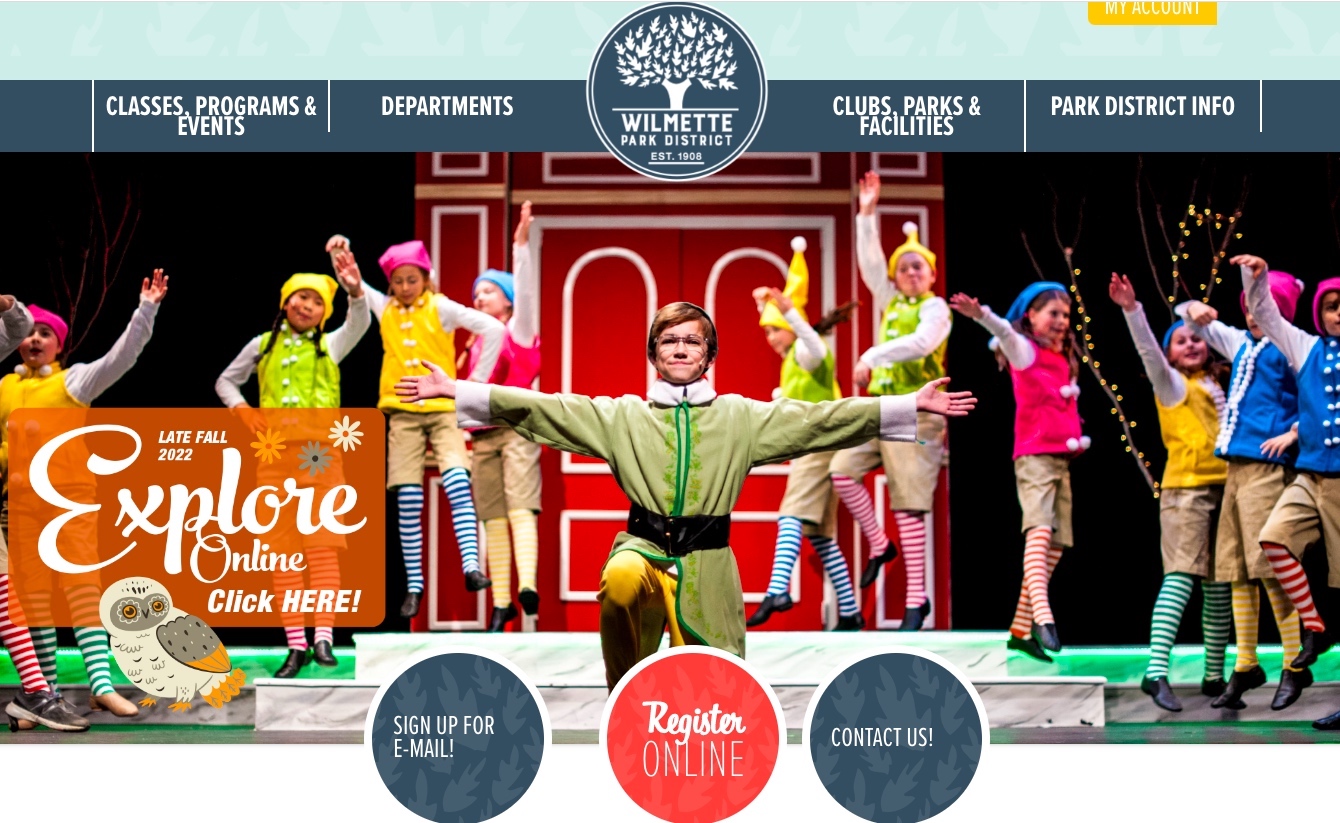 A homepage screenshot of the Wilmette Park District's website, WilmettePark.org.

Wilmette Park Commissioner Ali Frazier consistently says she approaches Park Board decisions from the mindset of a mother and regular user.

So on the topic of a proposed redesign of the park district’s website, Frazier’s comments were backed by experience.

“I can’t wait. This is long overdue,” she said. “… The community has called for it. It’s the first step of many in addressing communications lapses.”

Frazier’s board peers joined her on Monday, Oct. 17, in unanimous approval of a 12-week, $38,500 project that will transform Wilmettepark.org.

The work was awarded to OnPoint Web Design, of Massachusetts, one of nine bidders during the request-for-proposals process. Park District Executive Director Steve Wilson said two bids came in lower than OnPoint’s — one was discarded for not fulfilling the project’s scope and the other, at around $22,000, because of its limited ideas and flexibility with its designs.

Park district staff, he said, was impressed with OnPoint’s innovative ideas and open mind when it came to how best to engage with park district users.

Commissioner Julia Goebel, a marketing professional in the technology field, expected the project price to come in higher.

“This is a very reasonable price for what you are going to ask,” she said. “Having reviewed the proposal I’m very confident. … I like the approach they have to not do business as usual. You’re considering not just what a good park district (website) experience would look like, but you’re competing with (users’) last best experience.

“It can be a very good experience for the users we have and that’s what they’re owed.”

The park district’s website was last redesigned five years ago, and Wilson said it is owned by its designer, limiting the capabilities of park district staff. The new site reportedly will use more open-source (no owner) design and run on a WordPress content management system.

Park district staff and stakeholders will play a major role in the redesign, a main priority of which, Wilson said, is to improve the digital registration process for park district programming. The district also hopes to prioritize communication with residents.

“Over the past year plus, we have tried to create a better customer experience when browsing and ultimately registering for our classes, but we still hear consistent feedback about how our residents would like to see more improvement,” Wilson wrote in a followup email. “To that end, that is a focus of this redesign along with having a better way to keep the public informed about projects of the district, and the topics before the board.”

The approved 12-week contract includes eight weeks of development time and four weeks of followup support. According to OnPoint’s time line, the new site could be ready by the end of 2022. Wilson said the park district’s goal is have the site up and running in January 2023, prior to summer camp registration.