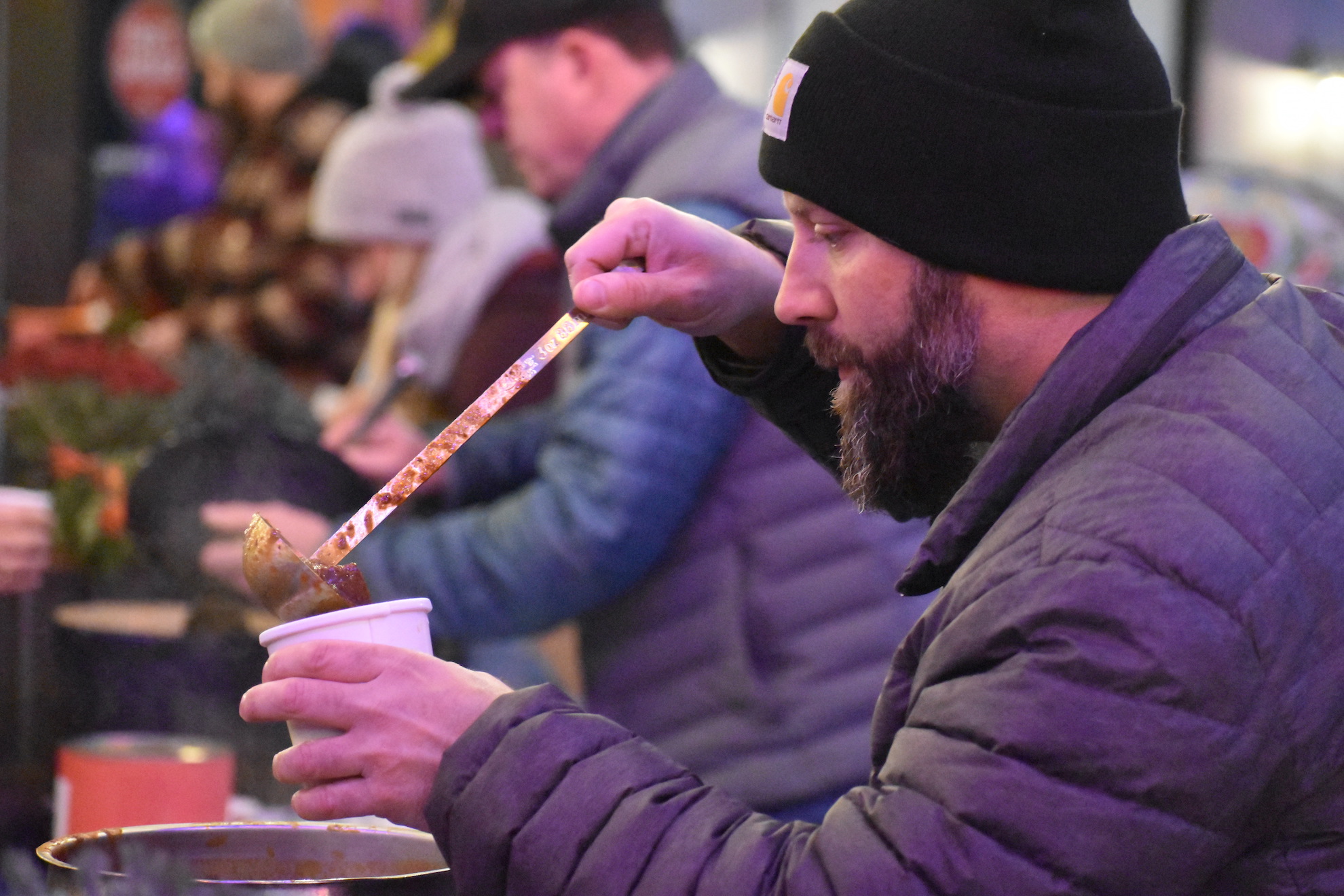 Tommy Vasilakis, of Brickstone Brewery, carefully pours a sample of chili during the Chili Cookoff on Monday, Oct. 17, at Fred's Garage in Winnetka. | Photos by Joe Coughlin/The Record North Shore

After living in Singapore for three years, Margie and Scottie Mollner recently returned to Chicagoland with a craving for fall.

They got more than a spoonful on Monday evening, Oct. 17, at Fred’s Garage in Winnetka.

The mother-daughter duo were psyched to join other resident tasters at the restaurant’s third chili cookoff, which after a two-year hiatus returned on an appropriately frigid Monday evening.

Ten restaurants stirred up savory entries that were evaluated by both a panel of judges and the general audience.

The all-star lineup of judges featured former professional athletes Kerry Wood (MLB-Chicago Cubs) and Mark Carrier (NFL-Chicago Bears) and Chicagoland journalists Ted Brunson, Phil Vettel and Kye Martin — all of whom were tasked with trying all 10 chilis, labeled only by number.

Martin, of Glencoe, took time between bites to say that the judges were taking their jobs very seriously.

“We’re judging on amount of sodium, texture; we’re getting into which peppers were used, how it feels in your mouth,” she said. ” … I’ve never had so much chili in my life.”

The decision was not simple, Martin said, but one had to be made. And much to their surprise, the judges top choice and winner of the Judges Choice trophy was the evening’s host, Fred’s Garage, and its house turkey chili. Wilmette restaurant Buck Russell’s claimed second with its Texas-style Bowl of Red. The People’s Choice division was won by Winnetka’s Grateful Bites, while Mino’s Italian, also out of Winnetka, finished second.

While the judging was a good time, Martin added that she leapt at the chance to help out both Fred’s Garage and SaLT, the beneficiary of the fundraising cookoff.

Fred’s Garage partner Cary Michael said he started the event in 2018 as a more creative and personal way to give back to the community. Each year, Michael selects a charity to support with the cookoff, which asks residents to purchase tickets to attend.

A Highland Park native, Michael said he was moved by SaLT’s support for Highland Park and Highwood in the aftermath of the mass shooting on July 4 in the city’s downtown area. Highland Park-based SaLT, or Service and Learning Together, was founded in 2019 with a mission to engage local youth through service work near and far. In the past three months, the mission centered on raising funds to uplift the community, including July 4 survivors, for whom SaLt has raised tens of thousand of dollars.