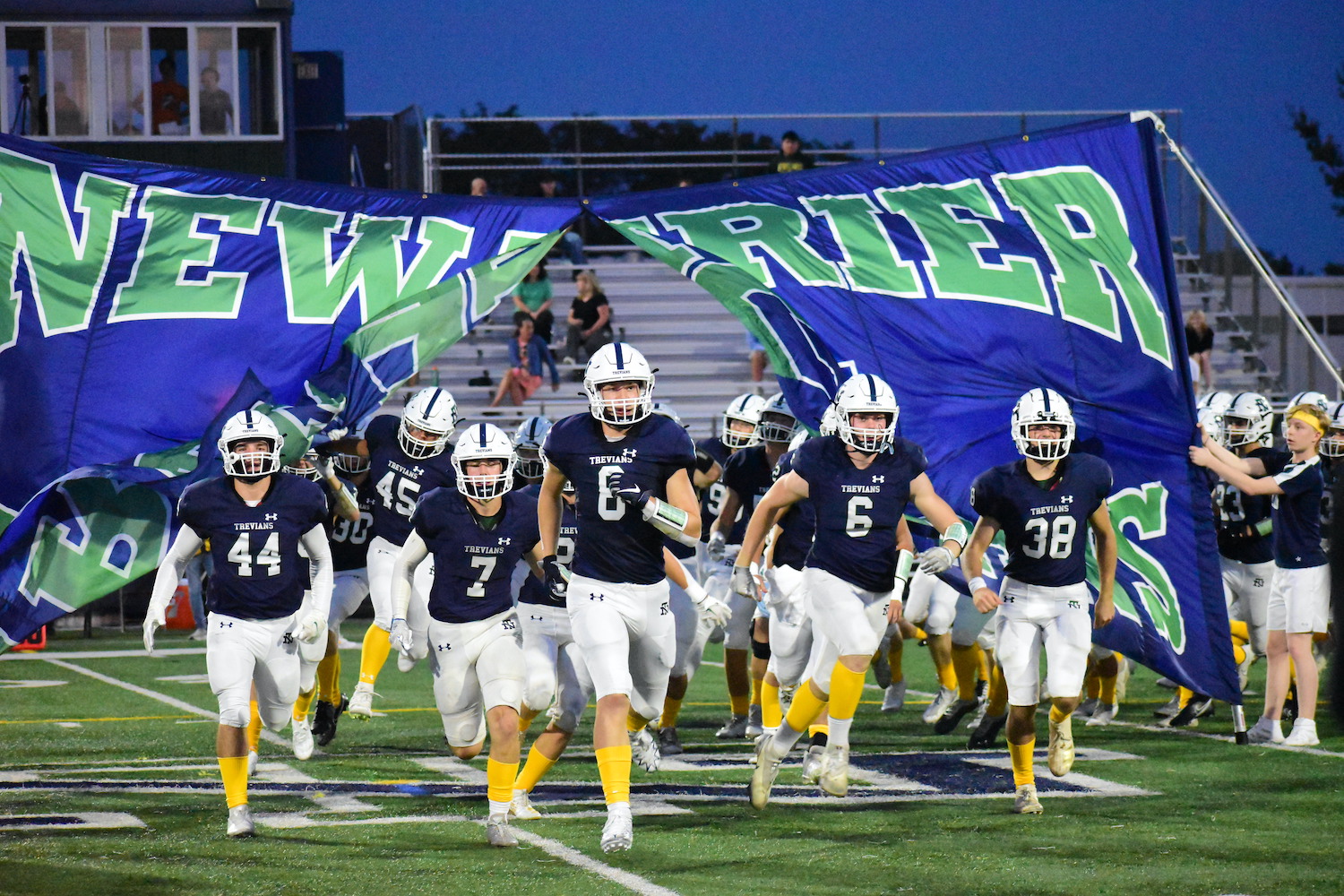 On a cold, windy, rain-soaked night in Skokie, New Trier players and coaches sensed they may need to get creative.

Facing a fourth-down with a seven-point lead during a crucial third-quarter drive, the Trevians lined up in punt formation and snapped the ball to junior Miles Cremascoli, who fired a pass out wide instead of kicking the ball.

Cremascoli’s pass fell incomplete but the play resulted in a pass interference penalty against Niles West, giving New Trier a key first down and extending the Trevians’ drive.

Just moments later, New Trier quarterback Patrick Heneghan capped the series with a 5-yard touchdown run. The Trevians (4-4) parlayed the trickery into a strong second half that led to their 34-14 victory over the Niles West Wolves on Friday, Oct. 14.

“That (fake punt) was huge for us,” Heneghan said. “When our coaches called that play, our offense knew we had to be ready to go back on the field. It was executed perfectly and when we all saw that our energy on the sidelines just went up like crazy. That was really big … and it just really boosted morale for the whole entire team.”

New Trier’s Week 8 victory was a bounce-back win after a tough loss to Central Suburban League South foe Glenbrook South on Oct. 7. The Trevs placed an importance on not looking ahead and focusing solely on this week.

“We came off of an emotional loss last week against a good team and then obviously you want to make sure your guys aren’t looking forward to Maine South next week, so the whole week was a focus on Niles West, but that’s not always as easy as you want it to be,” New Trier head coach Brian Doll said.

“I think it was important for us to take care of business tonight,” Doll added. “We’ve had some ups and downs this year. We knew we were a young team. We’ve grown at times, and we’ve had some really good moments.”

New Trier jumped out to a quick 7-0 lead over the Wolves when running back Charlie Blankstien rushed in a first-quarter touchdown. But Niles West answered early in the second quarter when Joseph Pantazis rushed in an 11-yard score.

Midway through the second quarter, New Trier’s Jayden Salazar recovered a Niles West fumble, setting the Trevians up inside the Wolves’ red zone. Heneghan again found the end zone, this time with a 2-yard rush that gave the Trevs a seven-point lead before halftime.

Sophomore standout kicker Niki Dugandzic extended New Trier’s lead in the third quarter with a 22-yard field goal. But Pantazis put the game back to within reach when he broke free for an 80-yard score for Niles West.

Heneghan rushed home another touchdown for the Trevians in the fourth with a 25-yard scramble. The score was his third rushing touchdown of the game and New Trier’s fourth overall on the night — a welcome sign for a team that has struggled to execute its running game at times throughout the season.

The game’s scoring concluded late in the fourth when Dugandzic nailed a 42-yard field goal to give the Trevs a 20-point lead.

Weather conditions were also a challenge for both teams as rain poured down at a steady pace for the game’s first three quarters. The heavy precipitation allowed the Trevs to focus on establishing their rushing attack.

“The conditions were hard but it also opens up other things,” Heneghan said. “You have to really execute that run game and we were able to do that. That was something that was really big for us. The linemen blocked really well tonight, and obviously you can’t get a running game going without the line.”

New Trier will conclude its regular season schedule next Friday, Oct. 21, in Park Ridge with a matchup against the Maine South Hawks.

The stakes could not be higher for the Trevs, as a victory would all but guarantee them a spot in the state playoffs and potentially earn them a three-way share of the conference championship.

A defeat may result in the end of the team’s season but New Trier could still have a narrow chance at a postseason berth given its playoff points total.

But right now, the Trevs are treating the contest as a win-or-go-home game.

“We have told our kids this time and time again: Maine South is a great program and a great team,” Doll said. “We have to match their physicality, we have to in the first half be able to go over there and stand toe to toe with them and that’s going to be the big key for us early on: not feeling like we shouldn’t be there. We need to know that we belong there in that situation.”