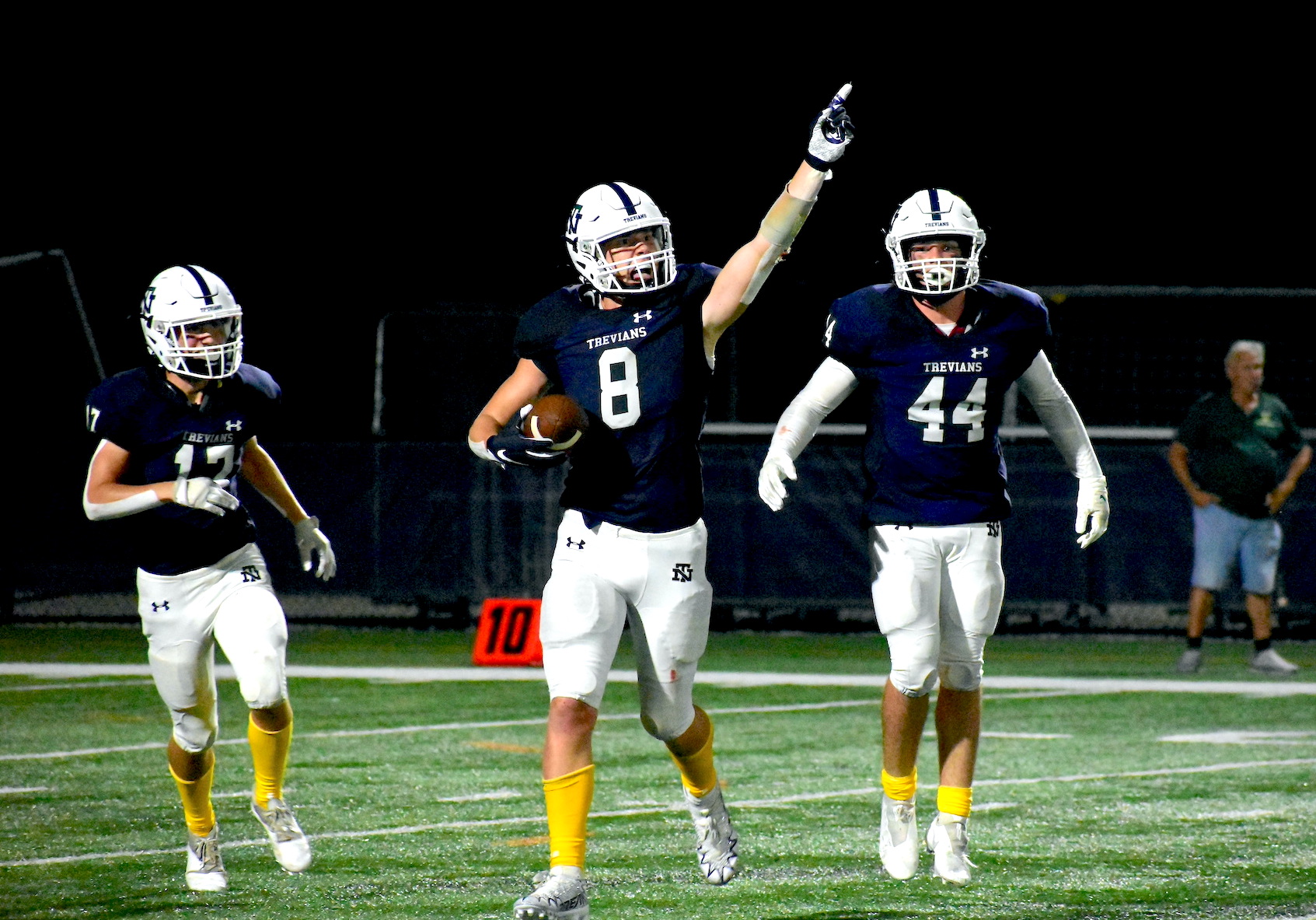 Pictured here after making a interception, Miles Cremascoli has helped the Trevians on both sides of the football. | Joe Coughlin/The Record North Shore

Miles Cremascoli is a junior wide receiver for the Trevians. He caught eight passes for 175 yards on Friday, Oct. 7, bringing his season total to over 600 yards to go with four touchdowns.

One thing I make sure I do is the day before game at practice I wear my game cleats and game gloves. It’s a superstition I have, like if I switch it up something might go wrong on game day.

2. What do you hope to do after high school?

I’m hoping to be able to play (Division I football) somewhere. I’m talking to a couple schools, keeping options open. I’m talking to whichever schools have interest in me and seeing what happens.

3. If you could play another position on the field, what would it be?

When I was growing up, I really liked to play (defensive) end. So if I had to play another, it would be that. I liked being able to go after the quarterback and being able to hit like that and make moves, like I do as a wide receiver, but in a difference circumstance.

4. What do you like to do off the field?

One of my favorite things to do off the field is customize shoes. I really like art. Like the ones I wear that are shiny, looks like there are diamonds on it. Patrick (Heneghan, Trevs quarterback) got a pair of cleats from me with his number and blue-to-white fade on them.

That’s hard. One of the things my mom and I talked about for me is being a teacher — because I like interacting and helping out kids. I learned that being a coach for flag football (NorthShore Jr. Trevians).

My favorite athlete is Odell Beckham Jr. (NFL—WR). I like his style on the field and all the acrobatic catches he makes. He’s someone I really look up to.

7. If you could travel anywhere, where would you go?

Right now, it would probably be San Diego because I have a lot of family out there. It’s where (my brother) Nevan was actually born and it’s where my dad grew up. I haven’t been there in a while.

One thing people don’t know about me is I am allergic to gluten. I have celiac disease. I can’t have any gluten and haven’t been able to since I was 4. I can’t really remember (gluten) so I’m not missing out on much in my mind.

10. What are your goals for the final two games of the season?

We hope to be able to win out the last two or win the next one and at least put up fight against Maine South. We are hoping to make a run in those two games and into the playoffs. For me, I just hope to keep doing what I’m doing and help out my team as much as I can.