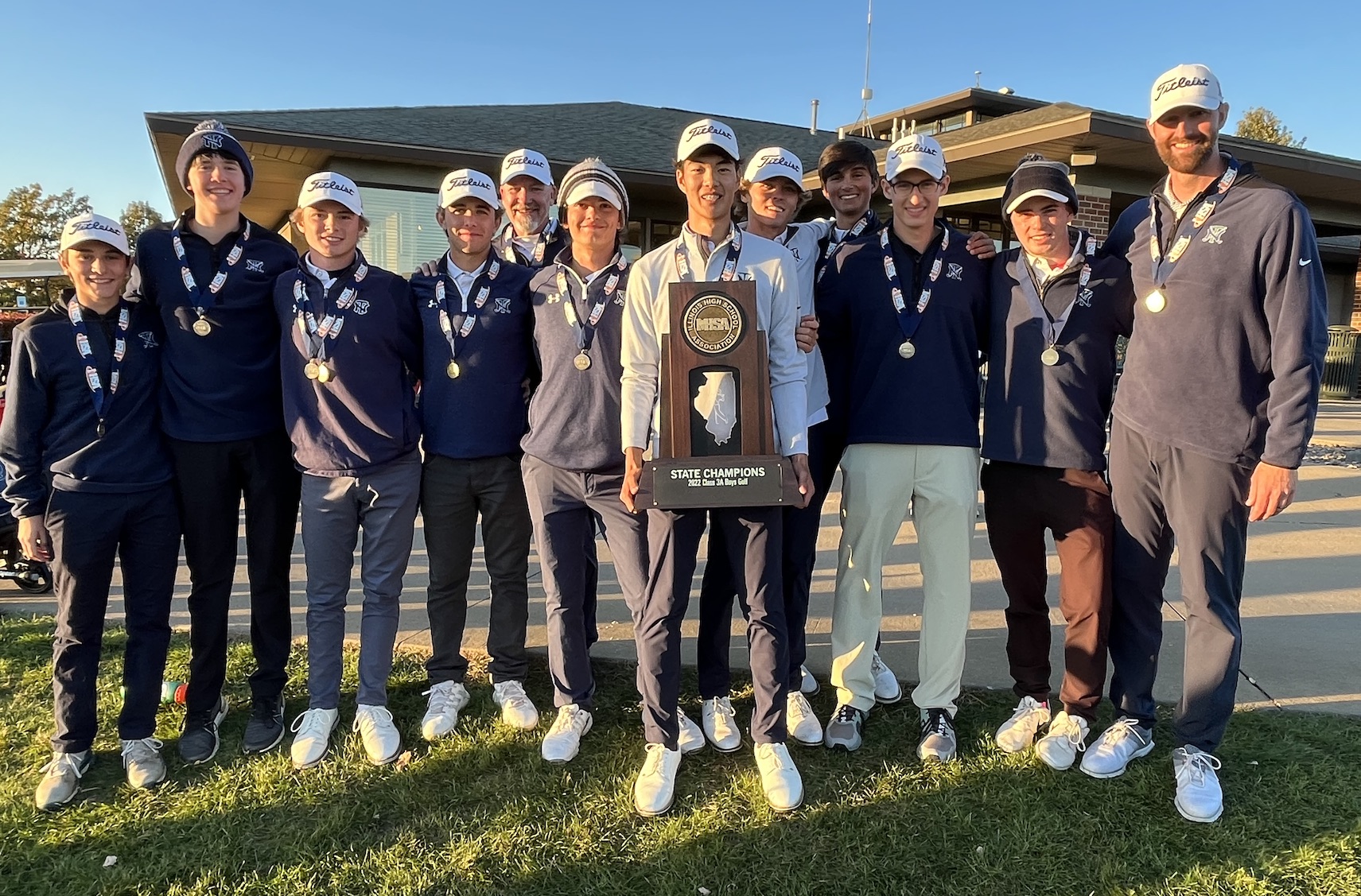 Being compared to a professional sports team is an honor — most of the time.

Coaches across the country know the meaning of a comparison to the NFL’s Buffalo Bills, who dominated conference play from 1991-’94 only to lose four straight Super Bowls.

With seven second-place state finishes in 12 seasons (since 2009), head coach Pete Drevline and New Trier were the Bills of IHSA boys golf — emphasis on “were.”

“We had to get the monkey off our backs and these guys for the rest of their can call themselves state champions. That’s the cool thing,” said Drevline a day after the Trevians bested the Class 3A field in the state tournament Friday-Saturday, Oct. 7-8, at The Den at Fox Creek in Bloomington.

New Trier’s two-day total of 603, or 27 over par, was two strokes better than runnerup Hinsdale Central and six better than third-place Glenbrook North. Lake Forest and Glenbrook South rounded out the top five.

Junior Johnny Creamean gave the Trevians a monopoly on the weekend’s championships when he bested Lake Forest’s Tadgh Burke in a playoff hole Saturday.

Creamean and Burke each shot a two-over 146 for the weekend’s top individual score. Creamean broke the tie in the first extra hole on win the state championship.

Johnny Creamean’s older brother Alex Creamean finished just two strokes behind the leaders, good enough for a tie for seventh place. The brothers were both in second place to begin the final round after shooting one-under on Friday.

“I’m really happy for him and really proud of him,” Alex said of his brother’s finish. “I was wishing him the best throughout the entire round and during the playoff.”

Also scoring for the Trevians were senior Tyler Greenspahn, whose 152 was good enough for 18th; and Noah Zyung, who finished with a 157 and tied for 33rd.

The weekend drama began before Johnny Creamean’s playoff hole. The Trevians built a 10-stroke lead going into the second day, but it slowly dripped away as the Spartans and Red Devils charged.

With live scoring available on any mobile device, players and coaches all over the course could check in on the leaderboards at any time. Drevline was choosing not too personally but couldn’t help but ask his assistant coach John Nasshan to pass him updates.

“I was very superstitious by not checking (the scores),” Drevline said. “But the guys were checking all the time and we knew teams would be hunting for us. And we prevailed in the end.”

Alex Creamean said it was not an easy finish, as he and his teammates carded their share of bogies over the last few holes.

Fortunately, the Trevs weren’t the only ones.

“It was within a few strokes and we had to focus up,” he said. “The final few holes were really tough. There were a lot of bogies out there, but not bad bogies because everybody else was making bogies. It was a weird feeling.”

New Trier took home the ninth state championship in school history (3 as New Trier East), first since 2003 and first under Drevline, who gave plenty of credit to Nasshan as a “calming” and “outstanding” force all weekend.

Loyola Academy senior Ryan Banas and Highland Par senior Alex Finger performed at All-State levels over the weekend, each carding a 150 and tying for 13th.