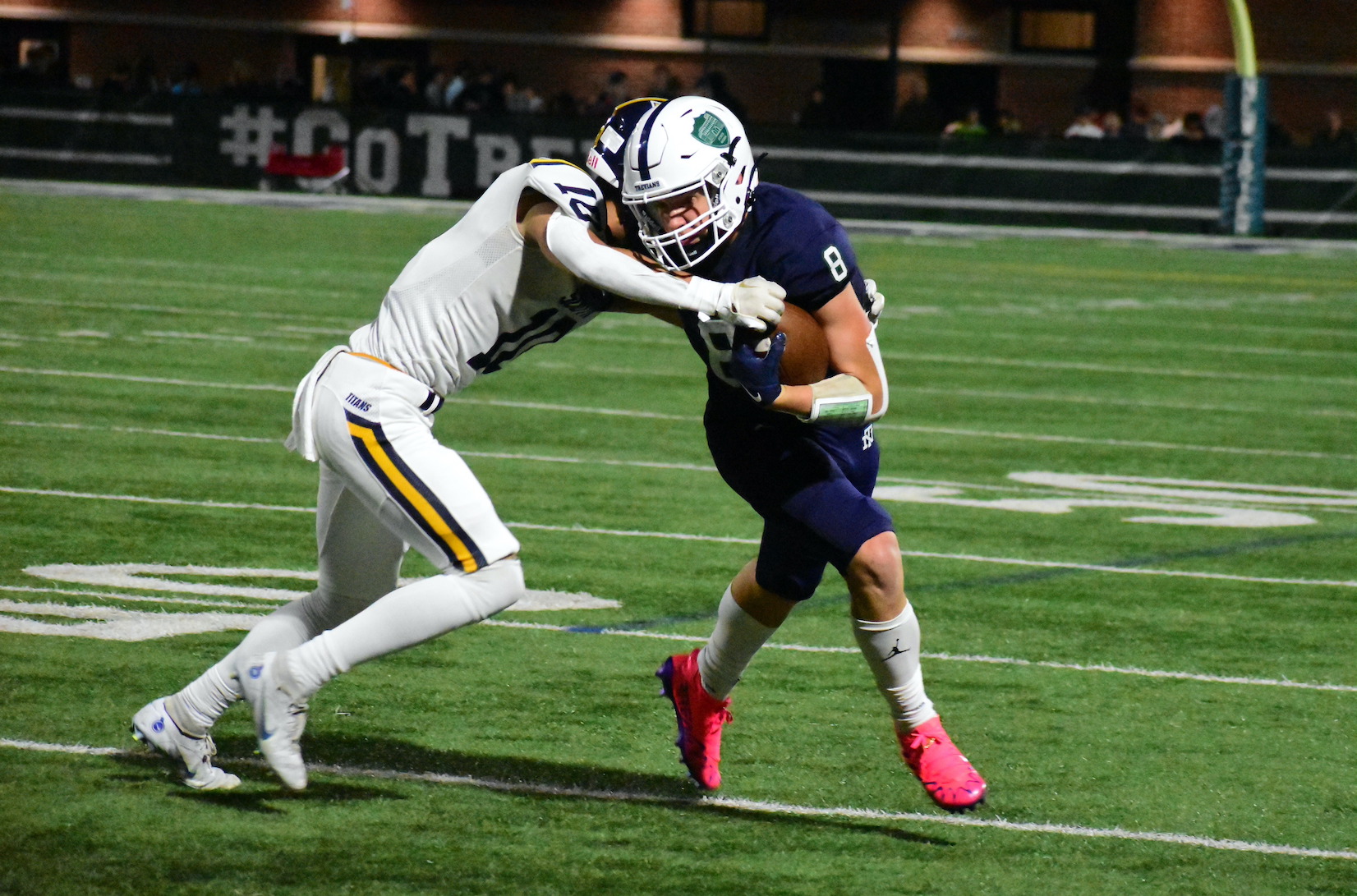 New Trier's Miles Cremascoli tries to shake a tackler after one of his eight catches during the Trevians' 24-7 loss on Friday, Oct. 7, in Northfield. | Joe Coughlin/The Record North Shore

After a slow start to the 2022 season, New Trier football earned three straight wins to revitalize the team’s hopes to accomplish two of their biggest goals: reach the state playoffs and win the Central Suburban League South conference.

But an unfavorable outcome in Week 7 against conference foe Glenbrook South has now left the Trevians facing an uphill climb to achieve both priorities with just two weeks remaining.

The visiting Titans defeated New Trier 24-7 on homecoming night, Friday, Oct. 7, in Northfield. South’s victory means the Trevians will need to win out to qualify for the playoffs or have a chance at the CSL South crown.

“They made big plays in key situations tonight and we didn’t,” New Trier head coach Brian Doll said. “We dropped a couple passes that probably could have been touchdowns, didn’t convert on some fourth downs, gave up one big play that we had been practicing all week against. And so, the execution piece wasn’t there. It wasn’t clean.”

Glenbrook South’s offense opened the game with an 80-yard scoring drive that ate up more than nine minutes of game time. The Titans converted two fourth-down attempts during the opening series before running back Chuck Gottfred finished the drive with a 10-yard touchdown run.

New Trier’s offense found some early success but South’s defense stopped the Trevians on a fourth-and-1 play. The Titans then turned that stop into three points, taking a 10-0 lead on a 32-yard field goal.

GBS found the end zone on its next drive after forcing a Trevs’ three-and-out. Titans quarterback Hunter Kreske connected with wide receiver Griffin Dahiya on a 57-yard touchdown, putting New Trier in a 17-0 hole at the half.

The Trevians’ best quarter of the night came in the third, where they cut South’s lead to 10 points with their only score of the night. A 3-yard pass from quarterback Patrick Heneghan to varsity newcomer Trey Meyers, a sophomore, completed the eight-play, 68-yard drive.

New Trier got the ball back after an unsuccessful fake field goal attempt by GBS but the Trevians could not capitalize on the Titans’ miscue.

“We played a pretty good third quarter,” Doll said. “I thought we were efficient and better, but you can’t play one quarter in a football game like that against a good team.”

The Trevians had another chance to strike in the fourth when Heneghan connected with Miles Cremascoli — who finished the game with a season-high 174 receiving yards on eight receptions — for a 33-yard gain that set up New Trier inside South territory. But the Titans forced an interception three plays later to stall New Trier’s momentum.

South’s offense put the game on ice with a 67-yard scoring drive late in the fourth.

Doll said he believed there were some missed opportunities for the Trevians throughout the night, adding that the team will add extra focus on winning the turnover battle next week.

“We left points on the board,” he said. “We didn’t execute.”

New Trier will head to Skokie next week for a must-win matchup with an improved Niles West. The Trevians know they’ll need to take care of business first in Week 8 before thinking about their game against Maine South the following week.

“In all reality, we can’t go in there next week expecting to have them just roll over. They’re playing better. … We have to get back to the drawing board a little bit, clean some things up and get a win next week.”