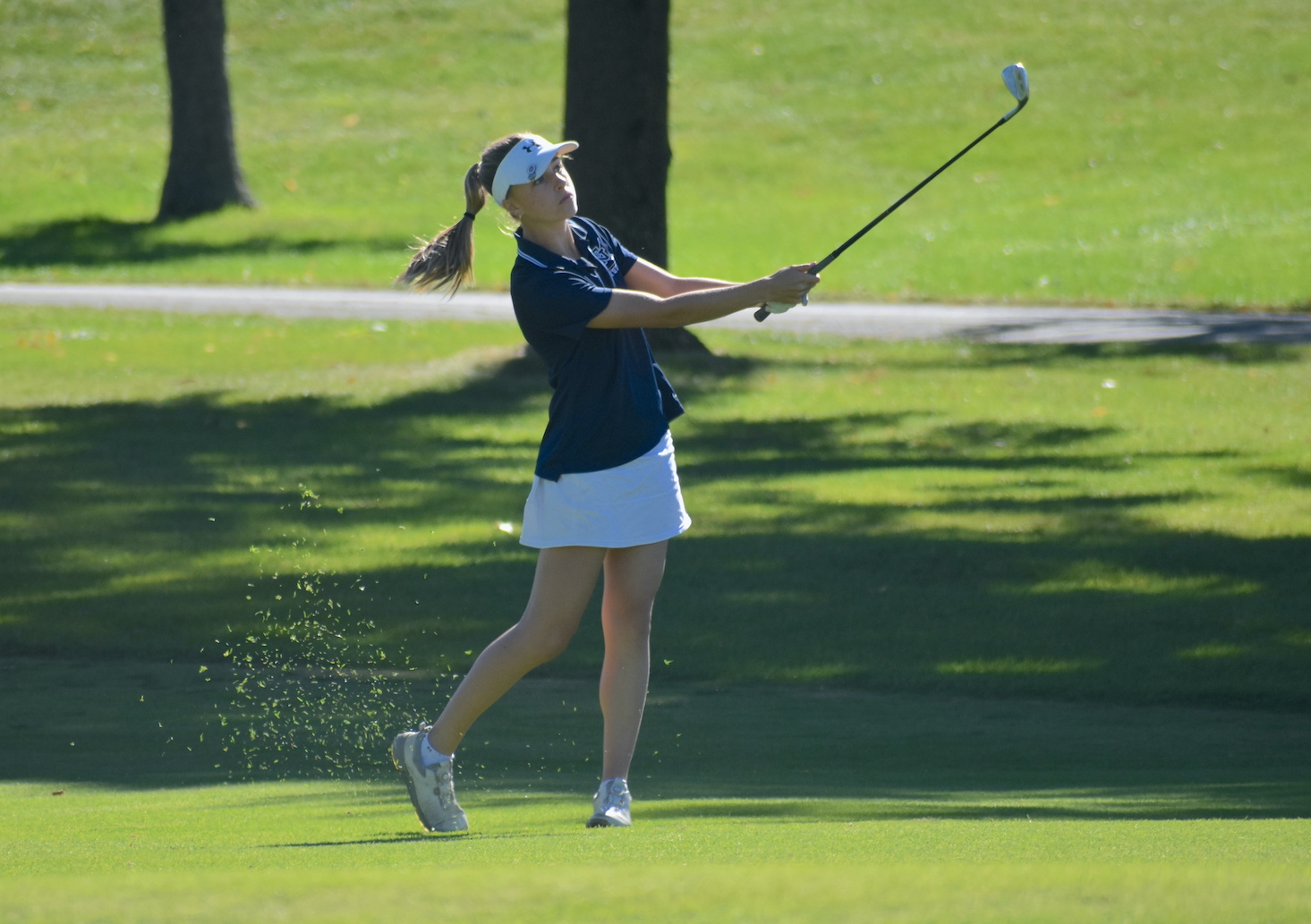 New Trier senior Amy Beanblossom follows through on an approach shot during her sectional round of 74 Monday, Oct. 3, at Heritage Oaks Golf Club. | Photos by Joe Coughlin/The Record North Shore

The sun burst through the suddenly colorful maple and oak leaves lining the fairways of Northbrook’s Heritage Oaks Golf Club on Monday, making for a good day to surprise the competition.

That was the mission of New Trier girls golf during IHSA Class 2A sectional play, when the Trevians recorded their best collective total of the season (317) en route to second place and another state berth.

While New Trier is a state-finals mainstay, qualifying for 24 straight seasons, this year it was no guarantee with an inexperienced roster and up-and-down regular season.

“I’m impressed with these kids. I’m really excited for them,” Trevs coach Scott Fricke said. “We’re a young team, two freshmen, three sophomores and … a senior. We took our lumps during the season and kept getting better and I thought we were playing our best golf at the end of the year and that was evident today.”

New Trier was again led by senior leader Amy Beanblossom, who carded a two-over-par 74 to finish in a four-way tie for third. Matching the Trevs’ ace was sophomore Alexa Green, who shot one of the top rounds of her high school tenure, Fricke said.

The Trevs also used freshman Grace Leber’s 80 and freshman Kendall Humphries-Solis’ 89 to find their way to second behind state-title contender Glenbrook North (298) and ahead of rival Loyola Academy (323).

“I was so excited when I saw how well everyone did — and that we beat Loyola too, which is great,” Beanblossom said. “Going into this, I was expecting it to be kind of a coin clip on whether or not we’d make it, but we got second, which is amazing.”

Beanblossom, who said she has state-championship aspirations, finished five strokes off the leader, Alexis Myers, of Glenbrook North, and one stroke back of second-place finisher Effie Perakis, of Glenbrook South.

Loyola’s Katie Magner tied Beanblossom and two others for third with her 74, leading the Ramblers to their state-qualifying finish. Magner was backed up by Bailey Bitbabo’s 79, Gigi Zera’s 83 and Abby Dimmberio’s 83.

“I was impressed with New Trier. I think they played lights out today, but we are happy. We squeaked by,” Loyola coach Katie Hickey said.

The Trevians and Ramblers will travel to Decatur this week and compete with Illinois’ top teams at the state tournament Friday-Saturday, Oct. 7-8, at Hickory Point Golf Course.

The Ramblers came home with a state trophy (third) in 2021 and are hoping to again place, but Hickey said there are no gimmies amid a tough field.

“It gets harder and harder. Glenbrook North is so good, Stevenson is so good,” she said. “It is hard, but I heard the weather may (change), so you never know.”

The Trevians’ and Ramblers’ male counterparts also hit the course Monday, Oct. 3, competing in an IHSA Class 4A sectional at the Bridges of Poplar Creek in Hoffman Estates.

New Trier continued its dominant postseason, which has now resulted in conference, regional and sectional championships.

Senior Tyler Greenspahn topped the field for medalist honors with his 6-under 66. The other scoring Trevians were bunched together in the top 10 with juniors Johnny Creamean and Noah Zyung shooting a 73 and senior Alex Creamean a 74.

The Trevs (286) finished 13 strokes ahead of the competition, led by fellow state qualifiers Glenbrook North (299) and Glenbrook South (301).

The Ramblers finished one stroke shy of a team state berth with their 302, but they will send three golfers to the state tournament as at-large entries. Joey Pieracci (72, third place), Ryan Banas (75) and Drew Southwell (76) will compete at the state tournament Friday-Saturday, Oct. 7-8, at The Den at Fox Creek in Bloomington.

Highland Park’s Alex Finger will also be in the mix at The Den at Fox Creek thanks to his 71 (tied for third) during the Dundee-Crown Sectional at Randall Oaks Golf Course.

In Class 1A, North Shore Country Day School made it three state tournaments in a row with a third-place finish in sectional play at Turtle Run Golf Club in Danville.