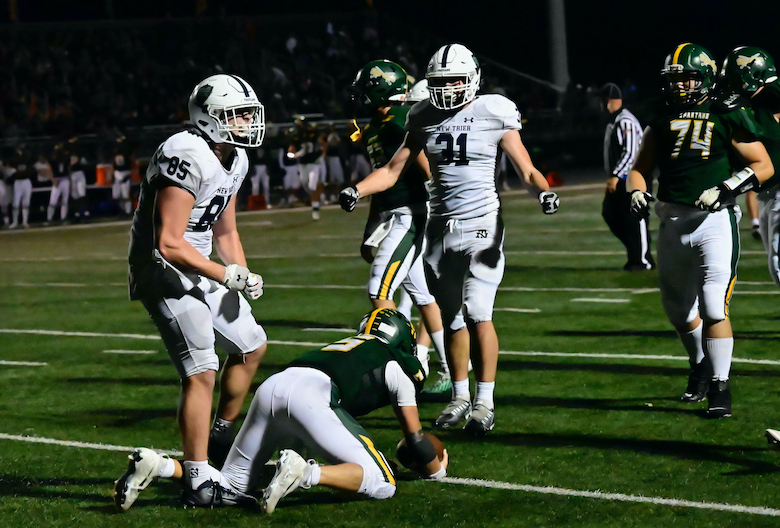 Competing on the road as your opponent celebrates homecoming is challenging. But it does offer advantages.

And trailing 17-10 against an unfamiliar offensive scheme, New Trier coach Brian Doll and company were happy to use the extra time.

“It was a little crazy at times trying to figure (Glenbrook North’s offense) out,” Doll said. “… I’m really happy with our offensive and defensive staffs. We had a really long halftime, which I think really benefitted us. We were able to go through all the film with our kids and make some good adjustments.”

The game’s tide turned quickly in the second half, as the Trevians scored twice and allowed zero points to their opponents the rest of the way to claim the 24-17 Central Suburban League South victory Friday, Sept. 30, in Northbrook.

New Trier got a major momentum shift when Charles Olges blocked a punt to set the Trevians up with good field position. Not long later, sophomore quarterback Patrick Heneghan rolled out before pulling down the ball and scampering into the end zone for the game-tying score.

“It was a really designed pass play, quick gain, but defense covered it well,” Heneghan said. “So I rolled out left. … So I just tucked it and ran and got in.

“Our big thing is we can’t come out of halftime flat. We have to be firing on special teams, offense and defense, and that’s something we did yesterday.”

Later in the quarter, junior Dylan Jeppe punched in a rushing score of his own, and the Trevians grabbed the lead.

All the while, the defense continued to hold with a changed-up scheme to try to contain the Spartans quick, scrambling quarterback.

“We just really changed our coverage into one where we were spying the quarterback,” Doll said. “And then we brought different kinds of pressure that weren’t necessarily things we practiced a lot.”

The Trevians and Spartans traded points early, with New Trier getting a 63-yard touchdown run from junior tailback Jackson McCarey, his second rushing score of the season in two games of action in the backfield.

Sophomore placekicker Niki Dugandzic drilled his second field goal in as many weeks, this one from 35 years plus.

Standout receiver Miles Cremascoli also had his presence felt once again with a pair of difficult catches on deep balls from Heneghan.

The win was the Trevians third in a row after beginning the season with three straight losses.

“We’re feeling really good,” Heneghan said. “But we also know there is a lot more this team can accomplish. We got three more regular season games and three tough teams coming up, but we are proud of how we’ve been focusing on week by week, winning quarter by quarter and we’ve been doing that.”

New Trier sits atop the conference standings at 2-0 along with Maine South (4-2 overall), with Glenbrook South (5-1, 1-1) right behind.

Both teams remain on the Trevians schedule as they host GBS in Week 7 on Friday, Oct. 7, before traveling to Niles West on Oct. 14 and finishing up with a visit to Maine South on Oct. 21.

“Right now we’re just really focused on one game at a time,” Doll said. “As a coach, I know what we have left and I know they do too. …. We’re not talking to (the team) about anything else but Glenbrook South. And that’s going to be our approach each week.”