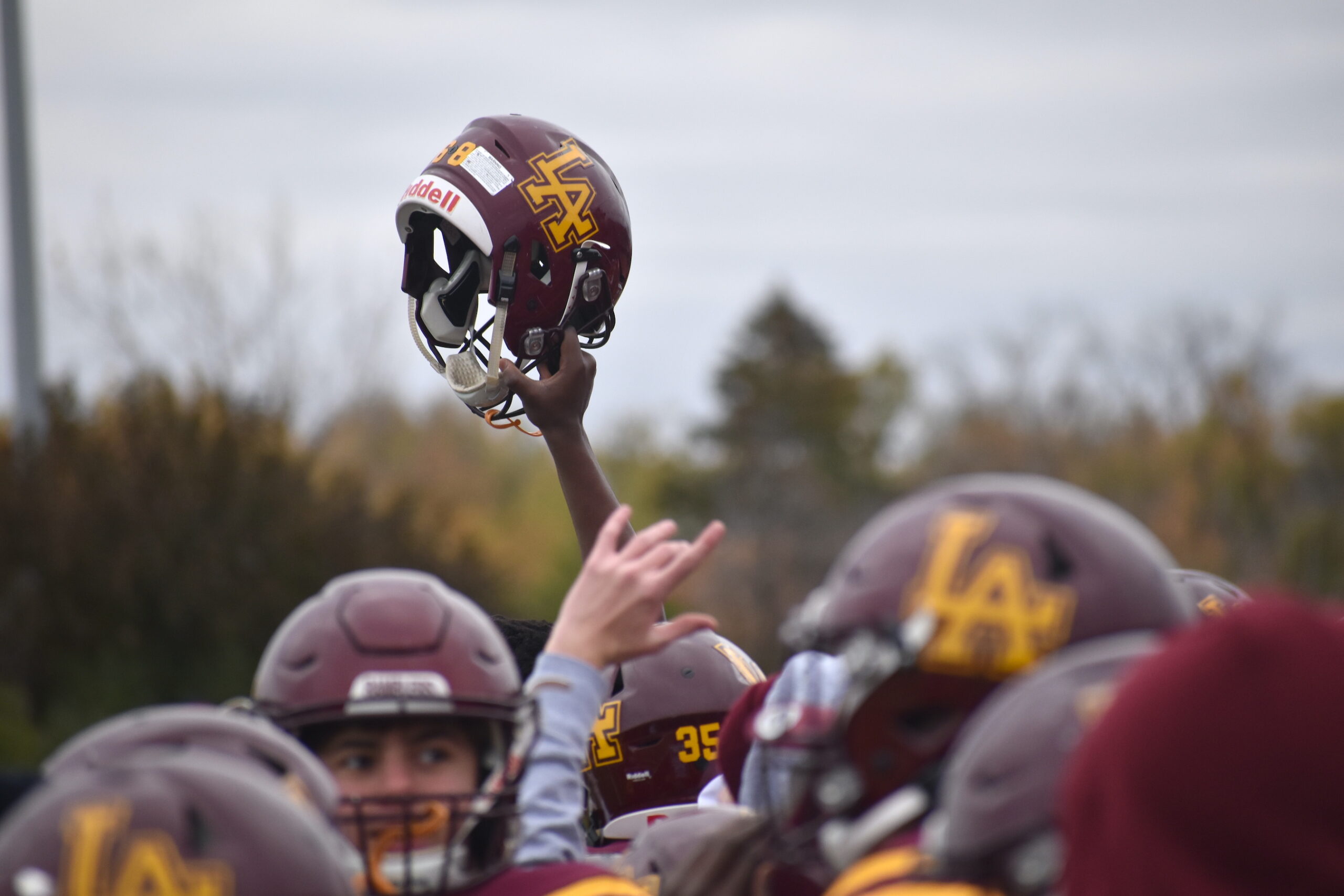 A compelling winner in its first two home games, Loyola Academy hit the road for the South Side on Friday night.

The Ramblers brought their “A” game.

Following the same script as they did against St. Xavier of Ohio and United Township of East Moline, the Ramblers made a powerful statement at the outset against St. Rita and the outcome was never in doubt.

After striking for four unanswered touchdowns in the first 15 minutes 44 seconds, the team that the Chicago Sun-Times ranks No. 2 in the metropolitan area coasted to a 34-14 victory over last season’s state runnerup in Class 7A and in 2019 in 5A.

Again senior quarterback Jake Stearney was in the forefront, hurling five touchdown passes to double his output for the season. He connected twice with senior wide receiver Spencer Leadbetter on plays covering 18 and 3 yards, and senior tight end Jack Parker, junior running back Will Nimesheim and senior wide receiver Declan Forde were his targets on completions of 3, 8 and 18 yards, respectively.

“The first quarter was excellent,” coach John Holecek said. “Jake commanded the offense and those were pretty good catches.”

Augmenting the passing of Stearney, the nimble and quick Loyola running backs, Nimesheim and sophomore Drew MacPherson, moved the ball on the ground.

Stearney finished with 14 completions in 20 attempts for 175 yards, Nimesheim carried 13 times for 63 yards and MacPherson rushed 8 times for 52 yards.

The All-State quarterback found multiple receivers. The most productive in terms of yardage were senior slot receiver Quinn Foley, 6 catches for 82 yards, and Leadbetter, 4 receptions for 49 yards.

“When Jake is throwing like that and the line is opening up holes like that defenses can’t predict what we’re going to do,” said Nimesheim, who said the secret of his success in the first three games was “be patient, dance around, find the holes.”

When the Ramblers corps of running backs was hit hard by injuries last season, Nimesheim got a lot of playing time as a sophomore, while MacPherson made his varsity debut as a freshman in the Class 8A semifinal loss to 2021 state champion Lockport.

“Being in that game helped my confidence a lot (going into this season),” MacPherson said. “Now, the offensive linemen and Will are giving me tips. I follow my blockers. Tonight they did a great job of opening holes I could see and run through.”

Like the dynamic multi-dimensional offense, Loyola’s first team defense was domineering against St. Rita, giving up only one first down in the first half.

The second TD was set up by senior defensive back Joe Auer’s interception and runback to the Mustangs’ 23-yard line and the third by senior linebacker Ray Wetoska’s fumble recovery at the home team’s 16.

According to senior defensive lineman Mickey Konovalov, preparation paid major dividends. “We watched a lot of film,” he said. “We knew St. Rita is a good team. We wanted to jump on them early.”

After seizing a 21-0 first quarter lead, the Ramblers increased their lead to 28-0 with 3 minutes 45 seconds elapsed in the second quarter and 34-0 with 3:29 elapsed in the third quarter.

As he did in similar situations in the one-sided victories over St. Xavier and United Township, Holecek summoned substitutes to play much of the remainder of the game.

The touchdowns for St. Rita (1-2) came on an 11-yard pass from junior quarterback Jett Hilding to senior wide receiver Kenneth Davis late in the third quarter and an 18-yard run by senior backup quarterback Michael Collins in the final two minutes.

Injuries were the only downer for Loyola in a game replete with uppers. Senior linebacker Rocco Izzo left Doyle Stadium with his right arm in a sling because of shoulder injury sustained near the end of the third quarter and senior offensive lineman Mario Hill was on crutches after being hurt at the start of the fourth quarter.

“Keep on building, keep on getting better, don’t get complacent,” Holecek told the players after the game. “We have some things to work on.”

The Ramblers will be back in the friendly confines of Hoerster Field for their next two games — Sept. 17 against 2021 Class 7A semifinalist Brother Rice (2-1) and Sept. 24 against 5A champion Fenwick (1-2).